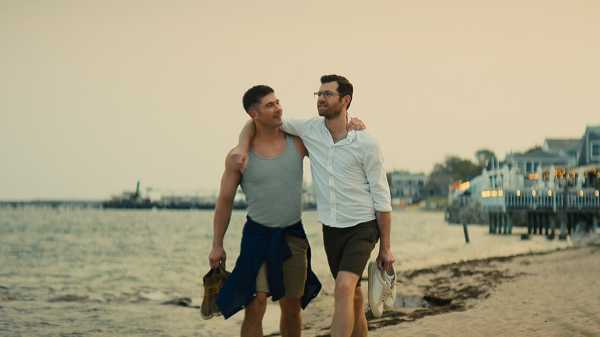 Early in the new movie “Bros,” our cranky hero, Bobby (Billy Eichner), a podcaster suffering from chronic relationship phobia, sits at his microphone and rants. “So, these big movie producers came to me and said, ‘We want you to write a rom-com about a gay couple,’ ” he says. A producer, in a flashback, asks Bobby for something a straight guy would go see, a movie that “shows the world that gay relationships and straight relationships are the same. Love is love is love!” “Love is love is love?” Bobby retorts, wincing at the regurgitation of Lin-Manuel Miranda’s Tony speech. “No, it’s not. That’s bullshit! . . . Our friendships are different. Our sex lives are different. Our relationships are different.” Minutes later, as if to prove the point, we see Bobby shaving his rear end for a guy on a hookup app who demands an “ass pic.”

“Bros,” which opens this week, is a gay romantic comedy from Universal Pictures, a combination of words that has earned it the much-ballyhooed distinction of being the “first gay rom-com from a major studio.” That early scene with the fictitious producer points to the question that animates much of what follows: To what extent can you map a gay love story onto the classic rom-com formula, or vice versa? The film, co-written by Eichner and its director, Nicholas Stoller, references—and wrestles with—rom-com tropes. Bobby watches “You’ve Got Mail” on the couch, but instead of AOL, he’s got Grindr. On his first date with Aaron (Luke Macfarlane), his studly love interest, they go see a movie—and then wind up having a foursome at a “gender-reveal orgy.” There’s a sex scene set to Nat King Cole’s rendition of “When I Fall in Love,” a pointedly Nora Ephron-esque choice. There’s the go-to Christmas-party scene, at which Aaron asks for permission to sleep around and Bobby sarcastically references “When Harry Met Sally.” Other familiar rom-com beats fly by—the sunlit stroll through the Upper West Side, the changing-of-the-seasons montage, the fight that tests the relationship, the final big romantic gesture—but they’re self-consciously interlaced with jokes about poppers, bottoming, and Caitlyn Jenner.

Simultaneously, the movie tangles with another relationship between queer identity and the mainstream: the place of white cisgender gay men. Bobby’s podcast is called “The 11th Brick at Stonewall”—because the first ten bricks were probably thrown by lesbians or trans women of color, he reasons—and he wins an award for Cis White Gay Man of the Year. Bobby sits on the board of an L.G.B.T.Q.+ museum, whose members represent a squabbling cross-section of queer identities, each fighting for a bigger piece of the story they’re telling. When Bobby’s idea for an exhibit on Abraham Lincoln’s purported homosexuality is sidelined at the same time that Aaron seems drawn to more masculine men, Bobby throws a fit, screaming, “Will someone please tell me exactly how gay I’m supposed to be?” He’s too gay for Aaron, but not queer enough for “post-gay” politics. He’s from the most privileged slice of a marginalized community—and the movie seems aware of the fact that its cis-white-gayness is part of the reason it got made by a major studio at all.

In other words, “Bros” is reckoning with the same tension over assimilation that has rankled the L.G.B.T.Q.-rights movement for the past half century, through debates over gay marriage or corporate floats at Pride marches. (Fortunately, it’s much, much funnier than most of those debates.) Whether in the bathhouse seventies or the “Will & Grace” nineties, the instinct to blend in and prove that “we’re just like anyone else” has clashed with a radical vision of life outside of heteronormative strictures. “Bros” is neither polemical nor pandering, and it walks the line with a side-eye in either direction. Even as Eichner has positioned the movie as a breakthrough pop-culture event—one that might show “all the homophobes on the Supreme Court that we want gay love stories,” as he yelled at the MTV Video Music Awards, in August—the movie itself seems to be questioning the value of entering the mainstream. As Bobby laments to a weirdly supportive heterosexual couple, “Gay sex was more fun when straight people were uncomfortable with it.”

The movie lands at a befuddling moment for the L.G.B.T.Q. movement. We’re well past the point of wondering whether America will accept a queer celebrity like Ellen DeGeneres, Neil Patrick Harris, or RuPaul. Harry Styles, one of the biggest pop stars of the moment, seems to want his sexuality to remain a blank canvas onto which his fans can project whatever degree of queerness they desire. And yet the conservative backlash is evident in Florida’s “Don’t Say Gay” bill and a rising tide of transphobic laws and rhetoric. “Bros” breaks new ground, but it’s far from the first big gay movie. It walks a path previously bushwhacked by mainstream comedies like “In & Out” and “The Birdcage” (which weren’t technically roms) and dramas like “Brokeback Mountain” and “Moonlight” (which weren’t coms), though it makes a point to roll its eyes at straight actors who play gay to chase Oscars, and its main cast is completely L.G.B.T.Q. “Love, Simon,” a major studio release from 2018, put a gay spin on the John Hughes-style teen romantic drama. “Bros” also comes on the heels of “Fire Island,” the Hulu-released comedy that had queer Asian American leads and also toyed with rom-com tropes—it was even based on the ur-rom-com, Jane Austen’s “Pride and Prejudice.” And, of course, there’s a rich tradition of queer indie cinema—work by Todd Haynes and Pedro Almodóvar and too many others to name—that has flourished outside the Hollywood studio system and its bread-and-butter genres.

“Bros” is nothing if not aware of all that thorny context, political and cultural, and treats it with irreverent bite. Eichner, whose man-on-the-street videos established him as a world-class screamer, is an ideal guide to the contradictions of white gayness in 2022. (His character has elements of Larry Kramer and Dan Savage.) He’s a loud-and-proud gay Jewish pain in the ass who just wants to be happy, and who are you to tell him that he’s passé? “Bros” was co-produced by Judd Apatow, who has helped fashion vehicles for such comic personae as Amy Schumer, Lena Dunham, Kumail Nanjiani, and Pete Davidson, and is being released on more than three thousand screens. I admit that I had shrugged off the “first gay rom-com from a major studio” line until I started seeing “Bros” posters, with their casual ass-grabbing, on what seemed like every bus station in New York and Toronto, where the movie delighted crowds earlier this month at the Toronto International Film Festival. That’s when I began to appreciate that being a major-studio product means having major-studio marketing muscle, which means positioning “Bros” as a movie for everyone, even straight guys—just what the fictional producer in the movie wants. But will it work?

“We never saw this as a niche or marginal kind of movie,” Michael Moses, Universal’s chief marketing officer, told me last week. The marketing for “Bros,” he said, is “both catered to L.G.B.T.Q. communities but also signalling to a mainstream audience that the intention of this is to be broad and welcoming.” Rather than gay movies like “The Birdcage,” Moses pointed to another Apatow project, “Bridesmaids,” as a precedent. “When that was coming out, there was kind of a referendum: Can women lead a raunchy, R-rated comedy? Or is that the purview of men, which it largely had been to that point? And then, years after that, ‘Girls Trip’—can Black actresses center an R-rated comedy and lead into mainstream success? It turns out that the answer is, if the movie is good enough, yes.”

As much as “Bros” places itself in the tradition of classic rom-coms, Moses pointed out that the rom-com itself isn’t exactly in its heyday, at least on the big screen. “Put the ‘gay’ qualifier to the side for a moment,” he told me. “The rom-com genre has largely migrated to the streamers, and so that’s actually, I think, the bigger thing to overcome in a lot of ways, bringing a rom-com out in a muscular way. The gay spin actually gives it definition and purpose and personality. So that’s the challenge between the golden era of the rom-coms, in the eighties and nineties, and now—just the migration to the couch.” The pandemic has made it difficult for any non-superhero movie to get a big theatrical audience. “Honestly, we’re a little in uncharted territory here,” Moses said. In some ways, he was pondering the same question as his fictional counterpart in “Bros”—will straight people go see it? Simultaneously, will the “core” L.G.B.T.Q. audience still feel like it represents them? Moses hoped that “Bros” would become a “date-night destination, whether that’s a man and a woman or two men or two women”—a tall order when date nights these days often involve Netflix and a couch.

With all those variables, it would be wrong to think of this weekend’s box-office as a test of how much America really likes gays, or gay movies, or gay movies in movie theatres, though the results will inevitably be interpreted as such. Think of it more as one cantankerous voice in the muddle that is gay identity today—pulled, as ever, between pride and prejudice—and as a point of evolution in a genre that it winkingly deconstructs from the inside. If “Bros” is a test of anything, it’s empathy. Bobby and Aaron meet cute, have sex, reveal their vulnerabilities, fall in love, fight, and try to resolve the distance between them—all in ways that are and aren’t familiar to straight couples. Can a straight audience see themselves in them, while also appreciating the differences? Gay people who love rom-coms have been doing the same for decades. ♦ 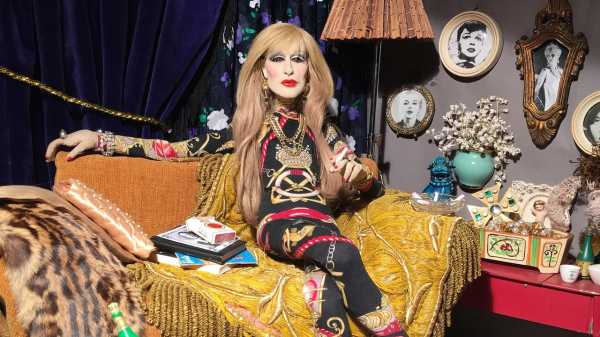 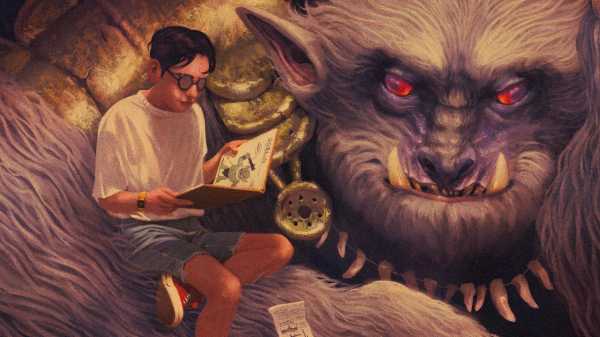