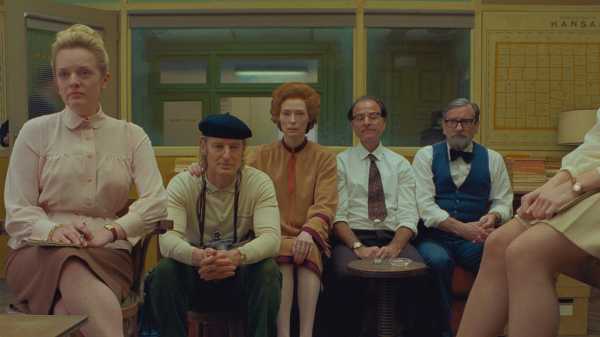 “The French Dispatch” should finally dispel a common misgiving about the movies of Wes Anderson—namely, that there is something enervated, static, or precious about the extremes of the decorative artifice of which his comedy is made. “The French Dispatch” is perhaps Anderson’s best film to date. It is certainly his most accomplished. And, for all its whimsical humor, it is an action film, a great one, although Anderson’s way of displaying action is unlike that of any other filmmaker. His movies often rest upon an apparent paradox between the refinement of his methods and the violence of his subject matter. In “The French Dispatch,” it is all the more central, given his literary focus: the title is also the name of a fictitious magazine that’s explicitly modelled on The New Yorker and some of its classic journalistic stars. Anderson sends writers out in search of stories, and what they find turns out to be a world of trouble, a world in which aesthetics and power are inseparable, with all the moral complications and ambivalences that this intersection entails.

Anderson’s fictional publication operates between 1925, the year of its founding by Arthur Howitzer, Jr. (Bill Murray), and 1975, the year of Howitzer’s death and (by his testamentary decree) the magazine’s as well. Unlike The New Yorker, The French Dispatch is based in France, in the made-up town of Ennui-sur-Blasé, where young Howitzer decided to prolong a vacation more or less forever by transforming the Sunday supplement of the Liberty, Kansas Evening Sun—a newspaper owned by his father—into a travelogue that soon morphed into a literary sensation. The movie takes the form of the magazine’s final issue, which features Howitzer’s obituary; a brief travelogue by a writer named Herbsaint Sazerac (Owen Wilson), which shows, in a thumbnail sketch, how the publication’s tone and substance has evolved; and three long feature articles. The features, each running about a half hour, catch the grand preoccupations and varied subjects of the magazine’s writers, and the combination of style and substance that marks their literary work—and Anderson’s cinema.