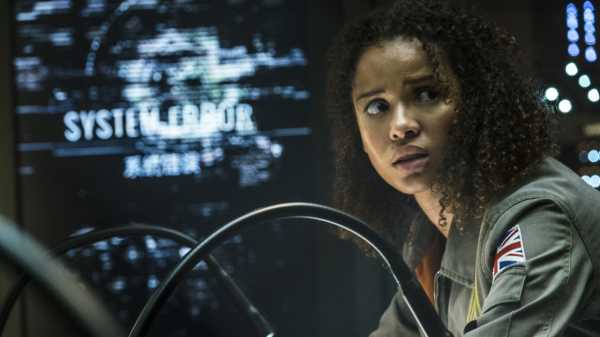 What’s worst about “The Cloverfield Paradox,” the J. J. Abrams-produced
movie that Netflix surprise-released, on Sunday night, after the Super
Bowl, is that it didn’t have to be bad. The film—the third in the
“Cloverfield” franchise—assembled a charismatic cast, headed by Gugu Mbatha-Raw, Chris
O’Dowd, Elizabeth Debicki, David Oyelowo, Daniel Brühl, and Zhang Ziyi,
and its core idea, from a script by Oren Uziel (who wrote the story with
Doug Jung), involves the kind of straightforwardly complex mind game
that can turn a mere space adventure into a seductive labyrinth. Earth
is menaced by a terminal exhaustion of power sources; a space mission is
launched to test a new kind of post-nuclear generator that, if it works,
will satisfy the world’s energy needs ad infinitum. But when, deep in
space, the generator is finally activated, its massive blast of energy
tears open the laws of physics and casts the vessel and its crew into an
alternate universe.

That leap into another reality is of special interest to one officer on
the crew, Ava Hamilton (Mbatha-Raw), who is in mourning. She and her
husband, Michael (Roger Davies), a doctor, lost their two young children
in a fire—and video transmissions suggest that, in the vessel’s
alternate realm, her children are still alive. Yet, in order to save the
world—the one from which the spaceship, called the Shepard, was
launched—the crew will have to repair the rip in the dimensional fabric
and leave the alternate world; to carry out her mission, Ava will have
to abandon hope of seeing her children again.

Would that it were so simple. First, there are scenes on the ground with
Ava and Michael in which he nobly coaxes her to take on the mission
despite the months of separation from her that it would entail. (Spoiler
alert: it turns out to be more than a few months.) Then, aboard the
spaceship, the international crew members replicate, in their
contentious relationships and seething distrust, the conflicts brewing
between nations on Earth over access to energy sources. There’s a 3-D
printer that’s used to make the spacecraft’s first and only gun. (It’s
printed in the first act, it’s waved around in the second, and it goes
off in the third.) Then, when the generator yields its mighty blast of
energy, other unexplained doings, borrowed from horror films owing
nothing to dimensional holes or shifts—extreme vomiting, a horde of
worms, a detached arm with a mind of its own—affect the craft and the
crew. There’s also one neat touch, involving a character turning up like
a stowaway, whose actual identity and place in the story suggest a realm
of missed chances for scientific yet seemingly supernatural intrigues.

The director, Julius Onah—this is his first big-budget feature—brings
earnest calm to the melodramatic elements and wry restraint to the
comedic ones. But his work has been edited to death, as if Abrams had
calibrated both the pacing and the emotional dosing to the atom and
feared a single drop of overflowing, unruly humanity. Failing to engage
with its ideas, its premise, and its characters, the movie devolves into
a seemingly haphazard sequence of actions that turns the drama into a
series of set pieces, as if borrowed from Agatha Christie, that thin out
the ranks of the crew one by one and maintain an illusion of inventive
variety by contriving different pretexts and methods for disposing of
them. The elaborate production design serves less to conjure any
futuristic high-tech verisimilitude than to distract viewers from the
lurching drama and the prefabricated emotions with shiny objects and
chilly gleams. (A recurring touch of O’Dowd’s character doing high-tech
repairs with basic tools, like a putty gun and a zapper, hints at the
untapped possibilities that the genre and the setup invite.)

And the place of the original “Cloverfield” in the mishmash? Scenes of
apocalyptic destruction on Earth, as experienced by the one Earth-bound
character who’s dramatically established—Michael—coincide with the blast
and the subsequent trouble aboard the Shepard. The connection is left
bare, dispatched with a narrative hand wave that nonetheless seems
calculated, at least, to set up a sequel. The real story of “The
Cloverfield Paradox” is its online release, which was announced in a
commercial during the Super
Bowl.
It’s hard to say that the movie is not good enough for theatres, given
the films that receive theatrical releases, but Netflix has figured out
how to release the film without throwing good money after bad. The
company has circumvented the elaborate marketing process with a coup
that depends both on the name value of the Cloverfield franchise and the
name value of the film’s actors.

What’s more, the danger of springing a turkey in peacock’s garb on
subscribers is, I think, mitigated by several factors. The first is
that, at home, standards are much lower, for obvious reasons—imagine the
spectacular experience that viewers would have needed if they’d
schlepped to a theatre after the Super Bowl and shelled out fifteen
dollars a ticket. The sheer curiosity element and water-cooler factor
are sufficient incentives for viewing. Also, “The Cloverfield Paradox”
wasn’t made for Netflix; it was taken over by Netflix—the experiment in
question was a sort of Hail Mary pass of marketing. But, next time,
a movie will be crafted for this purpose and the playbook will exist; it
will, I think, take more than one spectacularly released mediocrity
before fool-me-twice skepticism sets in. (For instance, the apparent
success of
“Bright”—Netflix
doesn’t release viewership numbers—suggests a homegrown franchise that
now has instant name recognition.)

News of the unprecedented advance ticket sales for “Black Panther,”
which opens on February 16th, suggests that theatrical release is far
from exhausted, as a commercial phenomenon and as an experience. But the
upcoming theatrical release of another film—“Golden
Exits,”
directed by Alex Ross Perry—at Metrograph, this Friday, reveals the
pitfalls of the process. “Golden Exits” premièred at Sundance, in
January, 2017; it hasn’t yet been released on any streaming platform,
and it has taken more than a year for it to go into a single theatre.
It’s slated to go into other theatres, in other cities, on February
16th—and also to be available digitally that day. It makes sense:
it’s an excellent movie that, with its unsettling and unresolved
tensions and intricacies, has little chance of finding a home in
multiplexes. But I’ve seen “Golden Exits” on the big screen, and,
watching it, I was reminded of the importance of the big screen for
so-called little films: there’s something special about the power of a
closeup, experienced bigger than life, to conjure awe and wonder. Yet
those aren’t the only worthwhile modes of movie-viewing. Writing in the
late nineteen-twenties and early nineteen-thirties, the critic Harry
Alan Potamkin considered made-in-New-York movies—i.e., independent
films—an essential counterweight to Hollywood; he saw the lavish movie
palaces, now looked upon nostalgically, as places that lulled and
dazzled viewers into passive submission, and saw the rise of the Little
Cinema movement (small theatres for limited audiences) as crucial to
the fostering of a new kind of movie. The screen may have been smaller,
but the films, in crucial ways, would be greater. Today, the prevalence of
movies available to stream, whether or not it proves to be a source of
revenue for independent filmmakers and their backers, at least provides
a similar resistance to oblivion—a way of getting movies seen in places
where “little cinemas” don’t exist. This is the real, more gratifying
“Cloverfield” paradox: in the time of streaming, “The Cloverfield Paradox”
and “Golden Exits” are viewable on the exact same screen, one after the
other.

Posters in the interior