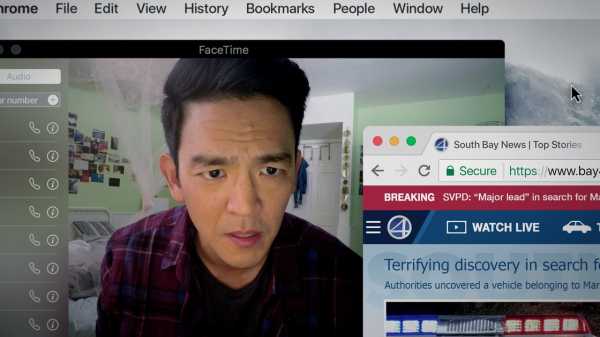 If it weren’t for the technical gimmickry of “Searching,” a new thriller directed by Aneesh Chaganty (who co-wrote it with Sev Ohanian), it might never have been made. The story follows the familiar path of a widowed father, David Kim (John Cho), a prosperous Silicon Valley engineer, whose fifteen-year-old daughter, Margot (Michelle La), goes missing after a nighttime study session. After contacting the police, he’s advised by the investigating officer, Rosemary Vick (Debra Messing), to take part in the search, and he does so by rummaging through the contacts on her laptop computer, questioning people she knows, and uncovering aspects of her life that she had kept hidden from him and that may have played a role in her disappearance.

The gimmick is that the entire action of the film takes place on—or, rather, is seen on—computer screens. The movie opens with a view of a generic-landscape screen saver and a cursor; the action begins with that computer playing a long video montage of scenes from Margot’s life, from birth through adolescence, and including the details of the death of her mother, Pamela Nam Kim (Sara Sohn), a sentimental fridging that’s only the first in a series of clichés. Before her disappearance, Margot communicates with her father by FaceTime and text message, and Chaganty’s approach to computer-screen interaction betrays his own classical cinematic inclination. He doesn’t use the camera to merely imitate the frozen gaze of one computer user; he cuts to closeups of particular text messages and video windows, turning many computer-screen dialogue scenes into a conventional series of alternating talking heads.

In this regard, “Searching” differs from the recently released computer-centric thriller “Unfriended: Dark Web,” in which the action unfolds in a continuous view of one computer screen in real time, with its various windows and texts popping into view but not being edited. Both films were produced by Bazelevs, a production company run by the producer and director Timur Bekmambetov, who is advancing a series of twenty-plus computer-screen movies that, he says, reflect “a new reality” and that can be made “with no rules.” With “Searching,” however, the lack of rules leads to both a drama and a technique that are utterly unoriginal. The events are spread over several weeks; they aren’t limited to the use of a single computer; and they’re edited to resemble the visual patterns of movies that aren’t bound to computer screens.

There may be no rules to the making of computer-screen films (actually, there are no rules for the making of any films, except bad ones), but the visual storytelling—despite the diverse digital sourcing of the information on which it depends—sticks very close to the film’s rigidly imagined and methodically connected plot. Cho, Messing, and La are excellent actors who are offered almost nothing to work with. (“Searching” depends upon Cho’s distinctive quality of dramatizing dialectical thought in action, as seen in such recent films as “Columbus” and “Gemini,” without extending or deepening it.) As a live-action thriller, the movie is indistinguishable from, and even inferior to, an episode of “Law & Order.” But what’s dismayingly fascinating about “Searching” is that, for all its reflection of secrets and traits both contained and dispersed in a person’s digital identity, it offers almost nothing of its characters’ identities. It renders them virtually faceless and lacking in inclinations, interests, and idiosyncrasies. When Margot’s secrets emerge, they’re gears of the plot, not aspects of her character.

The main effect of limiting the action of “Searching” to computer screens is to accelerate the pace of storytelling. Just as computers speed up the pace of work (a trip to the library is replaced by a few clicks; flipping through books is replaced by a search; the travel time for a visit is replaced by a video chat), the movie’s delivery of dramatic information is sped up to cram a large batch of narrative details into its hundred-and-two-minute span. Because the quantity of information is large, the filmmakers simplify the quality of it in order to render the action clear and unambiguous. The incidentals of daily life that surround its digital traces are filtered out; the context vanishes, but its vanishing isn’t dramatized. The filmmakers have little to say about whether computer-centric isolation is alienating, exhilarating, liberation, or terrifying—there’s neither enough computer-screen diversity nor enough physical activity to put the movie’s own premise into context.

The popularity of “Searching” is unsurprising. The modestly clever and easily advertised distinctiveness of its technique is a minor sensation, a variety of Smell-O-Vision, Percepto, or 4-D that creates new cinematic sensations without new cinematic ideas. The technique is an overhyped curiosity that will quickly run its course of popularity and soon come to seem quaint, a nostalgia-inducing artifact of a time when filmmakers tried less to confront than to exploit the obvious phenomenon of time spent in front of computers and online. What’s all the more remarkable, however, is the film’s critical acclaim.

Critics like rules, for a variety of reasons. One is that the power to detect them behind the unruly surfaces of movies seems like a display of analytical acumen. Another is that constraint itself is a mode of virtue in critical discourse; whether the practical constraints imposed by studios and producers in quest of commercial success, the deference to established classical modes of filmmaking, or the graceful submission to the practical concept of movies as a collaborative venture. What’s more, critics often take directorial adherence to one big rule, in lieu of the disparate conventions binding run-of-the-mill movies, as an act of principle. (I’m reminded of the work of so-called Dogme filmmakers, whose firm self-imposed rules appealed to critics—yet, far from resulting in original filmmaking practices, those rules resulted in an even more rigidly script-bound and conventional realism.) What’s noteworthy about “Searching” is solely its reflection of modern digital life, which few filmmakers successfully integrate into the texture and the substance of their live-action dramas. The failure of “Searching” is, conversely, an inability to integrate much of life at all into the world of screens. There’s no reason that a movie confined to a computer screen can’t be a good one, can’t be a substantial creation—but “Searching,” with its self-imposed rules treated as limits rather than challenges, with its conspicuous sense of obedience rather than defiance, doesn’t come close to it.