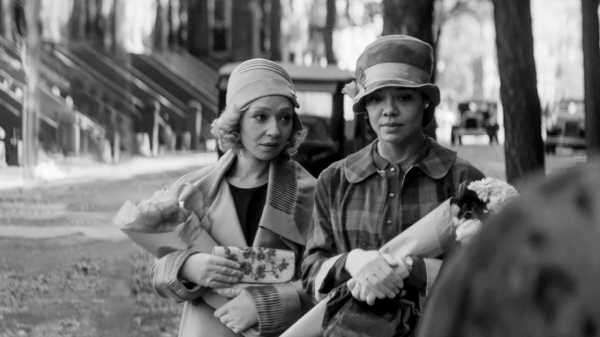 Rebecca Hall’s directorial début, “Passing,” based on Nella Larsen’s 1929 novel of the same name, is one of the rare book adaptations that brings a literary style to the screen. The film’s sense of style is more than mere ornament; it embodies the confrontation with circumstances—practical, emotional, historical—at the heart of the story. “Passing” (coming to Netflix on Wednesday) is a period piece, set in Harlem during Prohibition, just before the Depression. The movie achieves an ample, resonant reconstruction of that era, but it doesn’t feature colossal sets or give the sense that entire neighborhoods were transformed for the purpose of shooting. Instead, Hall uses sharply defined locations imaginatively and conjures the time through her original way with light, texture, and gesture, all redolent of a storied yet troubled past. The result is an emotional immediacy that’s all the sharper for its subtlety, all the more intense for its contemplative refinement, and that, above all, gives apt expression to the film’s mighty and agonized subject.

The movie stars Tessa Thompson as Irene Redfield, a woman of about thirty who lives in a Harlem town house with her husband—Brian (André Holland), a doctor—and their two sons, one a child and the other on the cusp of puberty. She’s an activist who works as a volunteer for a (fictitious) charitable organization called the Negro League while also running the household. A light-skinned Black woman, she’s taken for white by white people in the course of her errands outside Harlem on a hot summer day. At a hotel café, Irene encounters Clare Bellew (Ruth Negga), a friend from high school whom she hasn’t seen in a dozen years. Clare, too, has light skin—but, unlike Irene, she intentionally passes for white. She’s married to a wealthy white banker named John (Alexander Skarsgård) and lives her entire life amid white society. Clare’s reunion with Irene (whom she calls Reenie) awakens a long-suppressed desire to exist among Black people, to affirm her own identity without shame or fear. Clare imposes herself on the Redfield household, befriends Brian and the boys, takes part in Negro League social events run by Irene—and, in doing so, knowingly confronts the grave risk that John will find out that she’s Black.