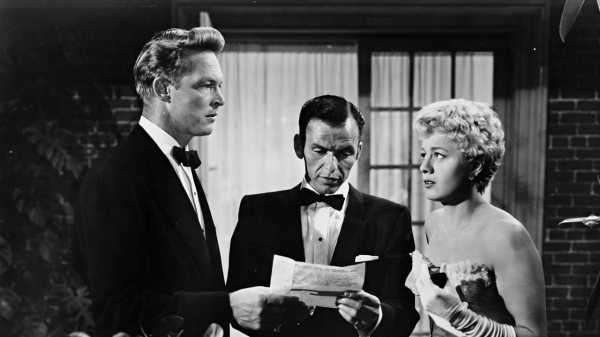 The movie screen only looks flat. A director’s inner space opens it up and draws a viewer into its alternate worlds. Many movies aren’t endowed with any such extra dimension of subjectivity and are perfectly enjoyable, within limits. Sometimes those limits are very broad, as when the flat screen is adorned with touches and flashes, gaudy baubles and coruscating illusions, of enticing and entrancing flair. These giddy delights often turn up on the great virtual American cinematheque, TCM. One such oddball masterpiece of flat-screen cinema, “Meet Danny Wilson”—a film-noir musical, from 1952—is playing there for the first time ever, this Friday, at 12:15 A.M. (It will also be streamable on the Watch TCM site and app, through August 31st.)

It’s a surprisingly rare film (unavailable on U.S. DVD or Blu-ray and not streaming elsewhere), given the prominence of its lead actors. In the title role, Frank Sinatra plays a character who greatly resembles Frank Sinatra: Danny is a talented but struggling night-club singer who, in order to advance his career, is forced to play ball with a gangster. His billed co-leads are Shelley Winters and the obscure but capable Alex Nicol, but they’re joined by a supporting actor whose dramatic power matches that of the leads—Raymond Burr. Almost on star wattage alone, “Meet Danny Wilson” should be a familiar classic. It’s directed by the remarkable Joseph Pevney, a minor master of flamboyant performances and exaggeratedly (even absurdly) expressive stagings, and it’s written by Don McGuire, an actor who was subsequently responsible for “Bad Day at Black Rock” (he adapted the story) and for “Tootsie” (he wrote the story). But the film’s energy is, foremost, that of Sinatra himself, and it’s something of a miracle that he unleashed it here in a role of scathing (and self-scathing) ferocity.

“Meet Danny Wilson” begins as a hard-nosed comedy, with Danny, the singer, and Mike Ryan (Nicol), his piano player, manager, professional partner, and eternal sidekick, getting playfully into trouble hustling pool. In a pattern that repeats itself throughout the film, the hotheaded Danny starts a fight that he can’t finish, and Mike steps in to protect him (a dangerous habit for a pianist). Out in the street, Danny’s head swivels toward every passing young woman, and Mike keeps him focussed on getting to work. At that night’s gig, at a rowdy joint where drunks heckle Danny, he again starts a fight that Mike finishes. Fearing arrest, the pair take off together into the night and, by chance, encounter a ritzy woman, Joy Carroll (Winters), outside a ritzy night spot, who ritzes them into a bar, where they become drunk and disorderly, get arrested, and, lacking funds to pay a fine, end up in jail.

Joy turns out to be a singer and pianist at a high-toned night club, which is owned by a gangster named Nick Driscoll (Burr), who, on a tip from her, auditions Danny, is duly impressed, and hires him and Mike, for the mere cost of fifty per cent of the pair’s earnings—for forever, an agreement that he plans to enforce by force. The brash and mercurial Danny becomes an overnight success; he also falls in love with Joy, who has long rejected Nick’s advances and who is in love with the steady and reliable Mike. Danny becomes a superstar—a sensation among teen-age girls, a veritable engine of hit records, and then a Hollywood screen idol. He also becomes a world-class asshole, arrogant and demanding, vain and condescending, and brazenly planning to terminate his deal with Nick.

The plot alone is taut and tense, built on the overlapping trip wires of various dangerous conflicts, but it’s not what gives the film its enduring vitality. First, McGuire’s script (or what Pevney and the actors did with it on the set) has a tang of slang that exudes a loopy, streetwise tone. After a fight, Danny says, “I should have torn his arms off,” and Mike retorts, “You couldn’t break celery.” In night court, an arresting officer says, “I tried to put the quietus on him.” Joy sends Danny off to sing with the encouragement, “Kill the people.” Danny hands a waiter a tip, saying, “Here’s a deuce, get yourself a B-29,” and the crusty waiter responds, “I got one.” What gives these knockoff gems their gleam is the actors’ energy—Winters’s unfazeable knowingness, Nicol’s dry bonhomie, Sinatra’s built-in derisive sneer, with his brash and sardonic gestures to go with it. (In a great scene at a late-night deli, Joy reproaches Danny for a too-intrusive question, and he slaps his own hand; when he describes himself to her as “a little nervous,” he does a shoulder twitch of sublime comedic bravado.)

Above all, however, “Meet Danny Wilson” is distinguished by the presence of the apotheosis of saloon singers, and its musical numbers provide the movie’s grandest, glitziest delights. Danny gets his bona fides in a couple of casual numbers—a blues sung in jail, “She’s Funny That Way” done as the torchy audition for Nick—which meet with astonished acclaim, whether from fellow-inmates or from Nick’s cleaning crew. On Danny’s opening night, which rockets him to fame, he opens with a slow and sinuous rendition of “That Old Black Magic” that silences the customers and draws them raptly toward the stage. Pevney catches the moment of a star being born in an extended medium closeup of Danny, who basks in the attention and grows ever more exuberant, ever showier, as his time in the spotlight goes on, as if expanding to fill the frame. Though Winters isn’t a singer by trade, she plays one, and does her signature number, “A Good Man Is Hard to Find,” in an insinuating Sprechstimme. (She and Sinatra also do a peppery duet of the song at a party scene, where they unfortunately end the number with some patter in an offensive stereotype of Black dialect.)

Sinatra swaggers and sasses his way through the movie with blithe insolence, and Winters fills her every moment with drive and intensity, but the performances have little dramatic unity, no thanks to the script, which offers hardly any distinctive characterization and cries out for backstory to raise the roles above clichés. (The very premise—two men, best friends and work partners, one a vain glad-hander and the other a disciplined regular guy, who are in love with the same woman—is one of the great archetypes of Howard Hawks, as in “Tiger Shark,” but Hawks enriches the setup with an array of idiosyncrasies and symbols that lend it vertiginous depths.) Instead, in “Meet Danny Wilson,” the actors contribute what they can—namely, megawatt dazzle—to make up for the lack of psychological substance.

The basis of the film was the cratering of Sinatra’s career. It was only a temporary setback, but, of course, neither he nor the world could have known that. His recording career had been in decline for several years (and, later in 1952, he was dropped by his record label, Columbia). He had acted in many movies but was hardly a movie star. (In his previous film, “Double Dynamite,” he had third billing, after Jane Russell and Groucho Marx.) His bookings for live performances had dwindled and were largely unsuccessful. Furthermore, his public image was tarnished by scandal: married to his first wife, Nancy, since 1939, he was having an affair with Ava Gardner, and gossip columnists denounced him as immoral. (Sinatra and Nancy divorced in 1951; he and Gardner married the same year.) According to Winters—who discusses “Meet Danny Wilson” at length in her first autobiography, “Shelley: Also Known as Shirley,” from 1980—Sinatra did the film because he needed the money. He put himself in the hands of a friend, McGuire, who crafted a story that stays surprisingly close to Sinatra’s own experiences (and was recognized as such at the time), with its references to Danny’s rise with gangland help, his adulation as a teen idol, and (spoiler alert) his sharp fall from grace owing to scandal—nothing that a synthetic happy ending can’t remedy. It’s hard to imagine that anything but the desperate need for a rapid career reboot would have motivated Sinatra’s risky self-exposure. It’s a sign of his unpopularity that this savory and spirited movie, based on his own public persona, flopped. (Of course, it was his performance in the 1953 drama “From Here to Eternity,” a nonmusical role, that relaunched him.)

Winters portrays Sinatra as arrogant as the character Danny became in his Hollywood turn. She describes two scenes that were cut because of his truculence, including the original ending. (At one point, the exasperated Winters threw a bedpan at Sinatra and hit him.) At the same time, “Meet Danny Wilson” gets its juice from the psychodramatic jolt of its story—the sense of Sinatra cathartically replaying his own rise and fall and adding on a rapid, phoenixlike resuscitation. The film is also invigorated by its ideological framework—centered not on politics but on show business. The story is premised on the transition from the near-comedy of the early days of Danny and Mike’s scuffling (no money, no fame, no respect, but lots of fun) to the grim tension of the high-stakes maneuvers by which they break through and Danny becomes a star (the relentless pressure of life in the public eye, the conversion of his art and his private life alike into the full-time business of Danny Wilson, Inc.). The film emphasizes the great sacrifices that great entertainers incur, the great risks that they face for the sake of our pleasure—and the essential difference of their temperament from that of ordinary people, leaving them outside the bounds of conventional habits and morality. “Meet Danny Wilson” may be merely flashy, but its bedrock doctrine remains common coin in the Hollywood of today. ♦