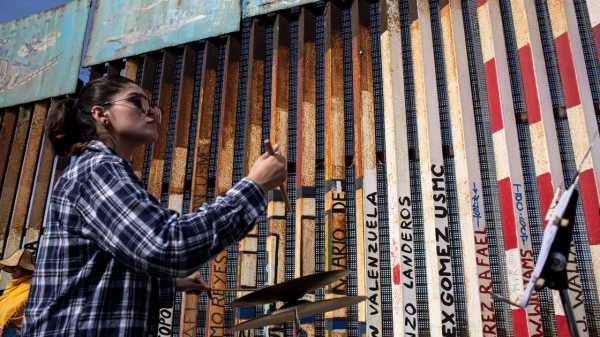 On Saturday, the percussionist and conductor Steven Schick looked
through the wire-mesh fence that separates San Diego, California, from
Tijuana, Mexico, and said, “Con la música nunca se puede dividirnos”:
“With music, we cannot be divided.” He was addressing a group of Mexican
percussion players, who were about to participate in a singular
cross-border performance of John Luther Adams’s hour-long percussion
work “Inuksuit.” I was standing on the Mexican side, where the wall is
adorned with brightly colored graffiti and studded with messages, some
sentimental and some political. On the reverse, a gray, institutional
look prevails. We were on the far western edge of the U.S.-Mexico
border. The land slopes down to the Pacific Ocean, and the wall descends
with it, disappearing into the waves.

Not surprisingly, the project of presenting an avant-garde concert in
this politically fraught territory proved to be a logistical challenge.
It almost didn’t happen: the San Diego Symphony, which presented the
event, had been on the point of cancelling it when, at 4 P.M. last
Wednesday, final approval came through from the U.S. Border Patrol.
Weather had further complicated the undertaking: the torrential Southern
California rains that caused deadly mudslides to the north had washed
out roads on the American side, making access difficult.

Schick, a longtime member of the faculty at the University of
California, San Diego, had conceived of a border performance nearly a decade ago,
when he was preparing for the world première of “Inuksuit,” in Banff,
Canada. You can actually see the concept flitting through his head in a
video that Evan Hurd made
for The New Yorker in 2009. (See 6:30.) Schick said to
me that, in San Diego, “we often don’t even think consciously about the border here,
because it’s so much a part of our lives. Not to sound too much like
Sarah Palin, but I can actually see Mexico from the end of my street.
When I started working on ‘Inuksuit,’ this idea immediately occurred to
me. John’s piece is about sound moving around in whatever geography it
takes place in. What would it say about this rocky land by the ocean,
which has a human line running through the middle of it?”

Around two years ago, Schick began talking to Martha Gilmer, the C.E.O.
of the San Diego Symphony, about curating a percussion-centered
festival, which they eventually called It’s About
Time. It involved not
only a series of concerts by the orchestra but also allied events by
more than a dozen other organizations, including the San Diego Opera. “It
turned out that we needed the institutional strength of the orchestra to
make this happen,” Schick said. “Given the advent of Trump and the
tensions surrounding the wall, the Border Patrol rejected a lot of
proposals. A German orchestra wanted to do a protest concert, and were
turned down. But we convinced them that this wasn’t a purely political
gesture. I’d thought of this long before Trump became an issue. The work
was a wedding present for me and my wife, Brenda. It’s very personal for
me, and I wanted it to be heard first as music, not as a statement.”

That said, politics was on everyone’s mind, and provoked media interest.
Al Jazeera sent a film crew to document any signs of resistance. Schick
has not been timid on the subject of Trump: on Inauguration Day, he made
a statement in
conjunction with a concert he was conducting in San Francisco. He
declined, however, to describe the “Inuksuit” event as a protest. He
told me, “One could be forgiven for having all kinds of political
thoughts. But I’m mindful of the fact that Border Patrol went out of
their way to make this happen. After the rain, they opened their own
roads to us so our musicians could get their instruments to the fence.”

On Saturday morning, I drove south with Gilmer to the crossing point at
San Ysidro. A corrugated-metal wall, erected during the Clinton
Administration, runs along the border for fifteen miles. As it snakes up
and down hills, it looks like a junk-metal imitation of the Great Wall
of China. “I’ve seen a few walls in my time,” Gilmer said. For decades,
she worked at the Chicago Symphony, and travelled to the demilitarized
zone between North and South Korea and to the former border between East
and West Berlin. The Berlin Wall makes for an interesting comparison.
There, you saw colorful graffiti on the western side and featureless
concrete on the eastern.

Hundreds of cars were waiting in long lines to cross the border into
the United States. Tacos, sodas, knickknacks, and, curiously, puppies are for
sale as people wait. We parked and proceeded on foot, to avoid the delay
coming back: it can take hours to pass through on the weekend. The
border area is chaotic, with hulking new facilities under construction.
Prototypes for Trump’s border wall are on
display just north of the fence on the American side.

In Tijuana, a festive atmosphere reigned. It was a bright, warm day, and
several hundred people were milling around next to the wall. This area
and the adjacent American zone together form a place called Friendship
Park. At the center stands Boundary Monument No. 258, a historical
marker that went up after the end of the Mexican-American War. First
Lady Pat Nixon dedicated the park, in 1971, saying, “I hope there won’t be a fence here too long.” At that time, a low three-wire fence
separated the two countries. In recent decades, the wall has steadily
grown in bulk, and a second fence was added on the American side,
creating a no-man’s-land strip, which is open only on weekends. The mesh
was made thicker, to prevent the passing of drugs and other contraband.
Gilmer greeted her husband and son by touching pinky fingers. Schick
gave a quick pep talk to the ensemble: thirty-five players to the north,
twenty-nine to the south.

The performance began almost inaudibly, with musicians breathing into
paper and plastic tubes. Then Schick let out a foghorn tone on a conch
shell. This was a signal for a gradual crescendo, building to a gaudy
roar of drums, gongs, cymbals, and sirens. I walked from one end
of the park to the other, holding my camera. The resulting
video will win no awards
for cinematography, but gives an idea of the happy clamor. The woman
wearing a visor and a sparkly jacket is Gabriela Jiménez, the
timpanist of the Mexico City Philharmonic. Rubén Hernández, Jorge Peña,
and Iván Manzanilla, leading Mexican percussionists, can be seen
alongside a number of their students, including Elián Sánchez, of
Tijuana, who is thirteen. By placing the camera against the mesh, I
caught a glimpse of the American contingent, which included four San
Diego Symphony players: Greg Cohen, Andrew Watkins, Erin Douglas Dowrey,
and Ryan DeLisi. Only performers were allowed in the adjacent strip; for
security reasons, Border Patrol kept the audience behind the second
fence. Some two hundred and fifty Americans showed up, having hiked
nearly a mile to reach the site.

I’ve seen “Inuksuit” several times, including a gloriously cacophonous
outing at
the Park Avenue Armory, in 2011. This one was overwhelming in its
impact, for obvious reasons. As I listened, I couldn’t help registering
the messages inscribed on the wall: “What God has joined together let
man not separate”; “Stop family separation”; “How many hearts must
bleed?”; “La poesía es gente con sueños” (“Poetry is people with
dreams”); “Love trumps hate.” Yet, as at other performances of Adams’s
remarkable creation, the sheer volume of the climax had the effect of
wiping my brain clean of concrete thoughts. I closed my eyes and found
myself unaware of the wall’s existence: the wire mesh did nothing to
stop the flow of sound.

In the final minutes, “Inuksuit” grows quiet again. Thundering drums
give way to shimmering triangles and cymbals. Samuel Peinado, one of the
younger Mexican performers, executed elegant bird motifs on the
glockenspiel. There was a faint rumble in the distance: I couldn’t quite
tell whether it was an American bass drum, a piece of machinery from
somewhere, or the ocean. The crowd grew quiet, too. A sense of
peacefulness descended—striking in a place charged by so much tension.
For a few long moments, the wall seemed to disappear.

Wild applause ensued, going back and forth in waves. The Mexican
percussionists greeted their American counterparts through the fence.
Schick shouted, “I will never forget this day as long as I live. Thank
you for coming from Guanajuato! Ensenada! Ciudad de México! And, of
course, Tijuana!”

Afterward, I spoke to Manzanilla, a former student of Schick’s, who had
brought six of his students from the University of Guanajuato, where he
teaches. “Half of them had never been on an airplane,” he told me. “Our
university supported the trip and arranged everything.”

Peinado said, “For me, this piece was so interesting because it was less
structured, giving me a creative space. It was a kind of rhythm not for
dance, for something more in your mind, this bigger process you are a
little part of.” Manzanilla commented on how much he enjoyed playing in
a public space, with tourists walking about. “It was advertised in
Tijuana, so many people came to hear this specifically, but others found
it by accident. We could see them trying to figure out what was going
on. It felt very special to play in this space because of that.”

At a San Diego Symphony concert the following day, the orchestra’s
tireless percussionists played Toru Takemitsu’s concerto “From Me Flows
What You Call Time,” with Schick conducting. Beforehand, Gilmer talked
about the “Inuksuit” performance, and quoted a message she had received
from one of the Border Patrol agents: “Events here at the border are
always about our differences as two nations, and this one was all about
our similarities—doing things together. As it is over, I miss it. I did
not want it to end.”