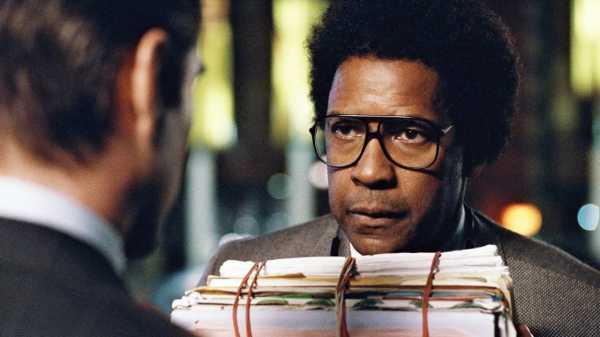 The most eccentric major-category nominee in this year’s Oscars is Denzel Washington, as Best Actor, for his leading role in “Roman J. Israel, Esq.,” which ran for a week in limited release and three
weeks in wide release before vanishing from most theatres. To date, it
has taken in only eleven million dollars at the box office—and I can’t
help wondering whether an anticipation of Oscar nominations and a
re-release was part of its distribution model. In any case, it’s back
now (and also available to stream, though at the price of a movie
ticket) and well worth seeing—not because it’s a great movie but because
it has unusual merits that make its blandly conventional elements all the
more disappointing.

“Roman J. Israel, Esq.” was written and directed by Dan Gilroy, whose
only other feature, “Nightcrawler,” offered, in the guise of an
impassioned exposé of the ways of TV news, a jumble of absurd plot
contrivances and a lead performance that seems made for a show reel
rather than a drama. Gilroy’s new film is, in its general contours, made
of the same elements (including its Los Angeles setting)—but its
premise, and the idiosyncrasy of its title protagonist, are so
significant and distinctive that they make a numbingly salesman-like
movie into something more.

Roman J. Israel is a lawyer who has spent his entire thirty-six-year
career as the employee of a boldly principled, civil-rights-oriented
defense attorney named William Henry Jackson. Roman does the legal
writing and stays entirely behind the scenes; Jackson is the trial
lawyer. But when Jackson suffers a heart attack and dies, Roman is left
unemployed. What’s more, Roman, scantly paid throughout his career, has
no savings, and the firm turns out to be in the red, leaving him with no
severance. He needs to find another job, quickly—and is offered one by
Jackson’s executor, a rich and famous criminal lawyer named George
Pierce (Colin Farrell).

Roman seems to be on the autism spectrum, though that word is never used in the
course of the film. Rather, in a brief voice-over, George says that
Roman is “a bit of a savant.” Roman has memorized the many volumes of
the penal code. He lives his life on a rigid routine. He uses an old
computer with a TV-like monitor and has an office full of index cards,
Post-its, dusty stacks of paper, and books, all of which serve the
comprehensive memory that he relies on in lieu of law-office software.
He listens to music of the seventies (on an iPod), he uses a flip phone,
his diet is heavy on peanut-butter-and-jelly sandwiches and doughnuts,
and his rumpled and loose-fitting clothing is eighties-vintage.
(Washington reportedly put on thirty pounds to play the role.) He also
has social difficulties—he has no filter, and he lets loose with frank,
insolent, and insulting observations that, at times, cause him serious
trouble.

Above all, though, Roman is a civil-rights lawyer, a lifelong activist
(albeit one whose activism has mainly been conducted in secret). He
worked with Jackson to help defendants—who would otherwise have been in
the hands of public defenders—cope with a judicial system that’s stacked
against the poor and people of color. Meanwhile, throughout the years,
Roman has been working in private on building a massive civil-rights
case, a class-action lawsuit to challenge the plea-bargain system by
which defendants, he argues, are effectively denied their right to a
fair trial. He believes that his case is of historic importance and will
end a widespread practice that results in gross injustices.

But Roman knows that his case requires, so to speak, a face—a great
trial lawyer—as well as significant resources behind it, and he hopes that
Pierce, his powerful and prominent new boss, will take it on.

This theme is Gilroy’s main and major achievement in “Roman J. Israel,
Esq.”: he has made a commercial movie with big-name stars and managed to
turn endemic injustices and long-standing abuses of government power
into the principal subject of a film that, moreover, is in the
Oscar stream. Significant parts of the movie show those injustices in
action; several of Roman’s clients (who are presented as guilty of
offenses far slighter than the charges) are being pressured by
prosecutors to plead guilty to charges that will result in years of
imprisonment, lest they go to trial and confront the risk of vastly
longer sentences.

With his relentless, unfiltered way of speaking, Roman—lacking diplomacy
and lacking hypocrisy—speaks truth to power in ways that sometimes bring
the wrath of the powerful down against him and his clients. Gilroy’s
depiction of the workings of a dysfunctional system—and of a
truth-teller who says, in court and to its officials, what others may
only think—is the film’s raison d’être, and it’s all the more
disheartening that, with such an idea and such an impulse, Gilroy didn’t
take the idea, or the character of Roman, to the extremes that the movie
implies.

Instead, Gilroy has Roman, first, take judicial matters unwisely into
his own hands, and then, ultimately, embark on an elaborate plot as a
secret informant that seems motivated both by vengeance (against a
criminal for whom his client took the fall, and worse) and by his own
idiosyncratic—and utterly unexpressed—blend of schemes and fantasies.
That’s where the movie comes apart, where its facile and conventional dramatic construction reveals its limits. Roman
has no family and no friends (until he makes a friend, a civil-rights
activist named Maya, who is played by Carmen Ejogo, and who serves the
plot mechanically), and his profound solitude doesn’t speak to his
character or his state of mind as much as to the state of Gilroy’s
script, and of screenwriting at large. It’s easier for screenwriters to
create characters living in a state of extreme isolation, because that
solitude spares them the trouble of imagining what the character would
say to friends and family—not merely the effort of imagining the
character’s conversations and web of relationships but, especially, the
complication of knowing (and of divulging to viewers) what the character
would say to family and friends about the events happening onscreen. A
character who’s voluble, who has a wide web of personal relationships
and directly expresses emotions and ideas, desires and motives,
threatens screenwriters—such a character might, like Marshall McLuhan in “Annie Hall,” pop out and tell filmmakers, “You know nothing of my inner
life.”

The character of Roman J. Israel is a great creation, set in a great
context, but both the character and the context are left woefully
undeveloped in order to maintain the movie as a showcase both for
Washington’s dramatic virtuosity and for Gilroy’s dramatic contrivances.
In effect, Gilroy has made the decision to turn a character-driven movie
into a plot-driven one; he truncates and stifles a fascinating character
in order to keep the story moving relentlessly forward on a narrow track
of synthetic action. For that matter, the very casting of Washington
suggests Gilroy’s fundamental misdirection: for the character of Roman
J. Israel, not even an actor as great as Washington could suffice; what
Gilroy needed was an energumen, someone on the order of Eddie Murphy,
someone whose energy threatens to break out of the stultifying script at
every moment.