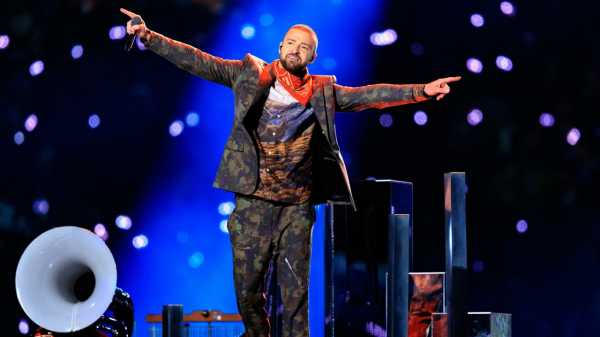 Last week, Justin Timberlake extended to his fans in New York City an
invitation to a pop-up storefront. According to Timberlake’s Instagram
account, there would be a “custom, collaborative product for every song
on the album”—the critically panned “Man of the Woods,” released earlier
this month. Pop-ups have settled into a rite of passage for celebrities
in recent years. In 2016, I didn’t bother trying to make it to any of
the twenty-one pop-ups that sold the merchandise designed for Kanye
West’s tour for his seventh solo album, “The Life of Pablo.” The same month,
when Frank Ocean, having emerged from a long dormancy with two bodies of
music and a zine enticingly titled “Boys Don’t Cry,” announced a pop-up,
a crowd seemed to materialize at Mulberry Iconic Magazines as soon as
the address was disseminated. Last winter, I walked by Kylie Jenner’s
Kylie Cosmetics less compelled by the Lip Kit Wall than by the
chance to experience the force of the Internet in the wild. I am
historically a fan of Timberlake, and so, late on Friday afternoon, I
went.

Experts in the science of album drops anticipate these openings.
Usually, a rumor is spread, via text messages to strategic power players
and then on social media. Speculators loiter, waiting for confirmation
of the address from sites like the Fader and Pigeons and Planes and
Complex. Crucially, all this usually happens in a single calendar day.
Digital natives have a craving for tactility, and resellers an instinct
for immanent vintage value. Rumors that the artist would stop by were,
in the case of Timberlake, proved correct; on Thursday night, as
hundreds waited in the sub-freezing temperatures for an early look, the
singer—warm in a Levi’s trucker jacket from the collection (lined with
Pendleton wool that was milled in 1982, the year his wife, the actress
Jessica Biel, was born)—visited the store on Wooster Street in SoHo,
bearing pizzas.

Timberlake is still enjoying an uptick of attention following his Super Bowl halftime performance, but the thirty-seven-year old, whose last
album was released in 2013, is far from a social-media sage. The day
after his visit, I found a quieter scene outside the store. Twenty-five
or so people were waiting on a ramp next to an arrangement of barriers
that were uselessly positioned on the sidewalk. A man named Ricardo, who
was waiting with a friend, behind me, said that he’d liked Timberlake for
a long time but hadn’t made his mind up about his fifth solo effort. Ricardo
became more excited talking about Heron Preston, the streetwear savant
who consulted on the early seasons of Yeezy, Kanye West’s fashion brand,
and also designed the tour clothes (T-shirts, hoodies) for the “Man of
the Woods” collection. “I met Heron Preston at a Yeezy show,” Ricardo
said, showing me a photo taken at Madison Square Garden in 2016. Since
around that time, shrewd young dressers have been living in the wardrobe
West sanctioned—ironic fonts and faux-Gothic epigrams printed on
denatured beiges and crisp whites. The merch of artists as musically
heterogeneous as Beyoncé, Ariana Grande, the Weeknd, and Drake all
derive from that initial Yeezy germ, itself a conceptual distillation of
decades of athletic wear.

The store’s windows had been blacked out with posters of barren trees,
and, inside, near the entrance, a television played a video of
Timberlake brooding in a wheat field—footage from the trailer for his album, I thought. Deeper
inside there was a sort of hearth, framed with branches and a bit of
fence, replete with burgundy rugs and comfortable chairs that faced the
products, which were bolted to the walls. The clubby shopper experience
resembled the one found at the sneaker temple KITH, which opened its
first location in Brooklyn, in 2011, where items are presented as
elevated art objects and customers must approach floor workers to access more
sizes of the rarefied streetwear samples on the rack. From Sonos
speakers tucked into decorative roots near the hearth, Timberlake could
be heard singing on the chorus of the rapper T.I.’s dirge, “The old me
is dead and gone.”

A salesperson wearing one of the hoodies designed by Preston—ink-black,
featuring a handsome range of forest and the word “Tennessee” on the
chest—handed me what looked like a periodic table. I was to indicate
what I wanted. Preston, who has designed for NASA and Nike, has débuted
his own collections of heady, “eco-conscious” streetwear—outfits that
recall the rectangularity of working-class uniforms and prognosticate a
long-sleeved, genderless future. Preston’s contributions to Timberlake’s
collection (instigated by Bravado, which is owned by Universal and
manages the merchandising of more than two hundred artists) flaunt
Preston’s wit: a purple T-shirt with the care instructions printed in
huge font on the front (“Made for mostly outdoor use and long trips”).

Timberlake’s sylvan look at the halftime show—a neckerchief, a shirt
emblazoned with deer—was in effect an advertisement for the rest of the
collection, a belated synthesis of aughts hipsterism and Midwestern
Americana. Bravado had brokered a deal with eleven brands, which did not
include Timberlake’s own clothing label, William Rast, which was founded
in 2005 and relaunched in 2016. Timberlake may have spent the last
decade two-stepping in European-cut suits, but, wanting to broadcast a
return to some Memphian authenticity, he had chosen to sell flannel from
Levi’s, bandannas and strongboxes from Best Made Co., sunglasses from
Warby Parker, and beard wash and beard butter from Maestro’s Classic.
Not-yet-released sample colorways of resurrected Nike Air Jordans
3s—created in collaboration with the legendary sneaker designer Tinker
Hatfield and corresponding to the fifth track, “Higher, Higher,” on the
album—taunted buyers behind glass. The unfortunate implication was that
the album’s songs of the self were also jingles. (It was Timberlake who
sang “I’m Lovin’ It” for the McDonald’s “urban” ad campaign.) The
album’s closing track—“Young Man,” a letter to Timberlake’s
son—corresponded to a Lucchese workman boot.

A savvy alignment of celebrity and brand can be riveting; the most
innovative thing the artist Lil Yachty, a.k.a “King of the Youth,” has
done, for example, is to accept a role as creative director at Nautica,
placing him in a lineage of black interpreters of prepster script. In
1997, the Gap asked LL Cool J to be a spokesman for the brand in a
commercial. He felt that the representatives at Gap had been
condescending to him, but he did the commercial anyway, inserting what
was essentially a covert advertisement for the hip-hop apparel company
FUBU into his verse. “It made them cool,” he told Oprah, in 2013,
referring to Gap. With “Man of the Woods,” there was little transfer of
cachet, no such productive clash. The collection has the same problems as
the album: it is under-edited, and takes its inspiration too literally.
Timberlake’s face or imprint is nowhere to be found, although some of
the tour clothes features his last name, which already sounds like a
Patagonia-esque heritage brand.

Soren, a physician from Brooklyn, was evaluating one of the five
iterations of the Levi’s “Montana” denim trucker jacket in a
floor-length mirror. “Do I like the album? I think it’s different,” he
said. He appreciated that Timberlake and Pharrell were experimenting
with what he called “Southern guitar riffs.” But he really liked the
jacket, which, at a hundred and ninety-five dollars, was close to
reasonably priced. When he flipped up the collar, the text “Montana,”
scrawled in white, revealed itself against the denim’s light wash.

The fashion critic Matthew Schneier, writing about the hugely popular
paraphernalia from Justin Bieber’s “Purpose” tour, also by Bravado,
which borrowed heavily from eighties heavy-metal T-shirts, recently
wrote that merch is “edging even further from mere memorabilia and
closer to a fully fledged, if single-minded, fashion collection.” Such
collections appeal to non-fanatics; T-shirts and cinched sweats and
roomy hoodies are cozy. More than that, wearing a sweatshirt featuring
the scowling face of Bieber is an acknowledgement of, as well as a
participation in, the inherent fake-ness of the era of artist as
corporation. The stylish—conformist, sardonic—know to join the stunt.

I considered a beautiful flask from Best Made Co., on which “Sauce,” the
name of the album’s third track, had been engraved. I was unconvinced.
The most attractive merch contains its own commentary—like the “Boycott
Beyoncé” shirt released post-“Lemonade.” Timberlake wasn’t always so
self-negating; “Cry Me a River,” a song of extraordinary beauty and
cruelty, in which he enacts a solipsistic revenge fantasy against
Britney Spears, appeared to let the listener in to his personal fury. The
political objection to the Timberlake revival—that he is an entitled
white man who doesn’t get the times—struck me as facile. But what the
aging Timberlake lacks is a compelling fantasy, a frame of
self-reference. “Sometimes the greatest way to say something is to say
nothing at all,” he sings on “Say Something.” The track corresponds to a
yellow Moleskine notebook.