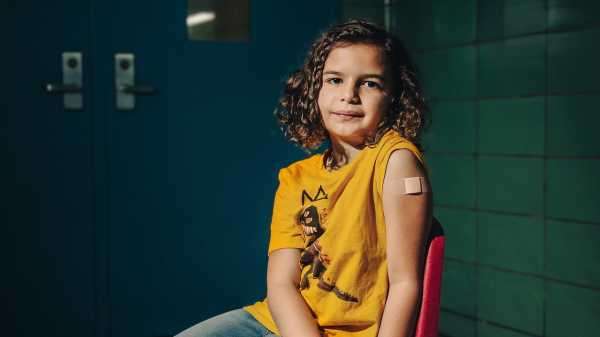 On November 2nd, the C.D.C. endorsed the use of Pfizer’s COVID-19 vaccine for kids between the ages of five and eleven. New York City began to mobilize, distributing a portion of its near quarter-million pediatric doses to doctors’ offices, hospitals, and vaccination centers. On Monday of this week, the city kicked off another part of its plan: meeting kids (and their parents) right where they are, with pop-up vaccination clinics planned for 1,070 schools throughout the five boroughs. P.S. 20 Anna Silver, a public school on the Lower East Side, had the good luck to host a vaccine clinic in the very first time slot of the very first day. A crew started setting up in the yellow-tiled cafeteria at 7 a.m.—one laminate lunch table commandeered for check-in, another for delivering shots, and two for the mandatory fifteen-minute rest and observation period that follows each shot. By the time the school day began, a scraggly line of kids and their parents stretched out the door, down the hallway, and outside into the sunshine. There were constrained shrieks of greeting near the rest tables, occasional twirls and snippets of song, and a perfectly understandable quantity of tears (cried by relieved adults as well as by children).

It would be something of a miracle if a sprawling, thousand-location medical undertaking were to go off without any problems at all. Midway through the morning, reports started circulating of delays and supply shortages at other schools’ pop-up clinics leaving hopeful parents and kids frustrated. (In response, the city health commissioner pointed parents toward the few thousand other places administering pediatric shots.) But things went smoothly at P.S. 20; by eleven o’clock, the flow of kids and parents into the ersatz clinic had stopped, and the vax team was packing up to leave. School employees hovered, ready to turn the room into a cafeteria again: the first wave of hungry students would be arriving soon for lunch.