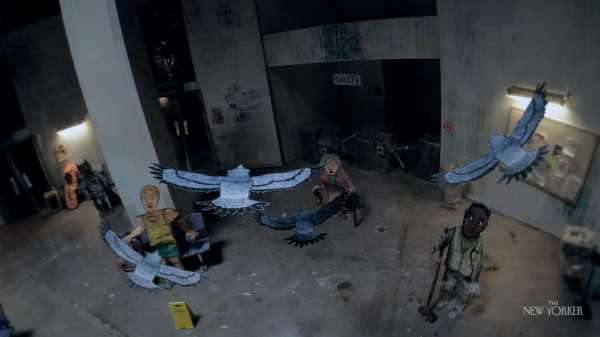 Antonin Niclass and Vladimir Krasilnikov observed people at a London station to create the paper-doll-like cast of “Do Not Feed the Pigeons.”

The director Antonin Niclass has always been drawn to portraying loneliness and ugliness—which is why his latest muse is Victoria Coach Station, a hub of public transportation in London. As someone who recently saw a pack of rats on a subway platform turn their styrofoam-container house into a home, I understood the logic.

“The film is about trying to see beneath the sad and disgusting cold walls of the coach station and find beauty,” Niclass told me, of his stop-motion short “Do Not Feed the Pigeons.” It follows a disparate group of people waiting for a bus that is perpetually delayed in a station that is perpetually filthy, only for them to bear witness to a moment of transcendence that brings them all together, if even for a breath, a beat, an instance. But, before Niclass could make a film about finding the beauty, the transcendence, in a bus station, he would have to search for evidence of it himself. So he and the film’s screenwriter, Vladimir Krasilnikov, followed the siren’s call of Victoria Coach Station and went to observe its comings and goings. “We started drawing and taking pictures of everyone and everything we saw,” Niclass said. “And we also were interested in seeing what was the life cycle there—who is there at six o’clock, who is there at midnight, who is there at 4 A.M., who is living in the station.” The people Niclass and Krasilnikov catalogued during that visit would evolve into the paper-doll-like cast of “Do Not Feed the Pigeons.” In the film, the passengers are distinctly characterized, ranging from inherently interesting but not unusual (a man in a suit who is more neat than freak, or a couple with a healthy stack of luggage at their side) to overtly outlandish (a drunken Batman who staggers in and instantly flops face down, or a person swaddled in a sleeping bag, virtually faceless, looking not unlike Laura Palmer in the pilot of “Twin Peaks”). And yet, no matter how odd any given individual is, all are wordless—their 2-D frames making it so that they’re nearly invisible, much less distinguishable, if they move in a certain way. The people at this station, in their lack of interaction with or even amusement for one another, are situated at the intersection of “it’s really none of my business” and “I really don’t care,” just as the people are at almost any station, platform, or stop the world over. When you’re trying to get to the next place, you stop looking at the place you’re actually in, or the people who are in it.

But, lest we forget: What of the titular pigeons? The “flying rats,” as Niclass jokingly referred to them? How do they factor into all of this?

For much of the film, they’re but breathing set dressing, like fluttery litter. Not as sensational as, say, a literal rat bash on a half-eaten turkey club, the pigeons can, at times, seem as invisible as the people are to one another. Sure, they squat on bird spikes, or hump each other, or bombard a baby feeding on potato chips. Sure, they are regarded like the garbage on the floor, which is mindlessly being shuffled around by a janitor who is not making the station cleaner so much as he’s rearranging the trash. But there’s something a bit auspicious about the pigeons’ dopey yet open stares and their purplish-green feathery façades that will ultimately translate into the beauty, the transcendence. The very thing that the station appeared to have been missing—something pretty—has been there all along, nesting in the rafters. And, for that breath, that beat, that instance, the loneliness and the ugliness are finally gone, and the travellers are finally united.

“I think I didn’t believe in the possibility of people getting together only for a moment,” Niclass said. And then, with a laugh: “So making the film was a way to make it happen.”