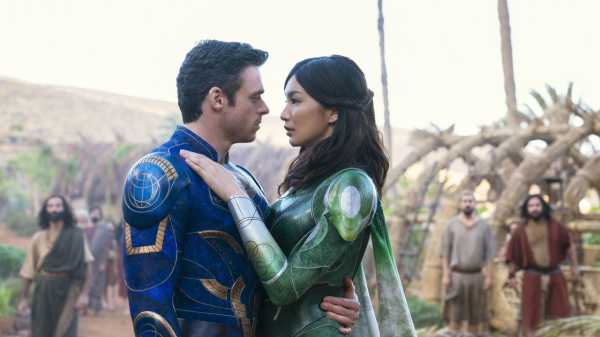 The word “auteur” is used to refer both to independent filmmakers displaying their originality under conditions of artistic freedom and to filmmakers who assert their individuality within the confines of the studio system. Chloé Zhao, the director of “Nomadland,” has always been the first kind of auteur, and with “Eternals,” which opens today, she takes her place among the second. Such a transition can be fascinating. Ryan Coogler’s artistic hand was unambiguously strong in “Black Panther,” as was Peyton Reed’s in the first “Ant-Man.” But directorial personality—and, even more so, originality—is generally hard to come by in the stringently produced, tightly interlocking Marvel domain. Zhao has said that she actively sought out the chance to direct a Marvel film. She was also one of the four writers of the “Eternals” script, and it shows: far from being an impersonal film, it blends her sensibility and the franchise’s, albeit to the advantage of neither.

The problem is hinted at from the start, with an elaborate crawl of text setting forth the backstory of the Eternals. They are introduced as a superhero team whose main purpose is to save the human race from monsters called Deviants. In this mission, the Eternals are under the quasi-divine reign of a group called the Celestials and its head, Arishem, and under the practical leadership of the foremost Eternal, called Ajak (who is played by Salma Hayek). The question of identity and purpose, which the opening text lays out, will ultimately be central to “Eternals” and will provide it with its few jolts of intrigue. Yet, strangely, the extensive world-building that the project demands appears to be no obstacle for Zhao, because she is an essentially expository director. Whether in “Nomadland” or “The Rider,” she tends toward contemplative observation of her characters’ interactions but does so with a tightly focussed sense of dramatic purpose: she rarely stops long enough to hear out her characters, lest she risk perturbing her unambiguous narrative frameworks. The quieter action that Zhao has filmed in the past and the turbulent action inherent to a Marvel movie prove surprisingly similar.