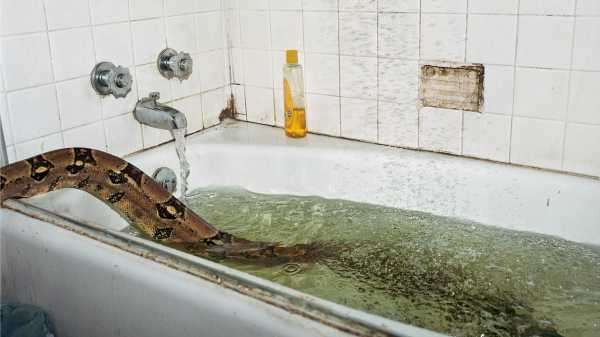 Curran Hatleberg’s photographs were taken in the American South, most in northern Florida—the real Florida, some might say. Once, decades ago, I lived in a trailer just outside Woodville, Florida, on the banks of the St. Marks River. Very little went on in Woodville. The biggest event in my moment there was a total eclipse of the sun in Perry, some fifty miles away. It took place on March 7, 1970, around one in the afternoon, and lasted a bit over three minutes. Residents were excited at the prospect of a large influx of visitors, because not much ever went on in Perry, either. A member of the town’s Chamber of Commerce said, “There hasn’t been anything like this in years and won’t be ever again, I suppose.” But the sky was overcast that day, and many people were disappointed that they couldn’t see the sun being erased in the sky. Still, the phenomenon was pretty unnerving, as the darkest night fell in the middle of the day and the birds ceased their singing. 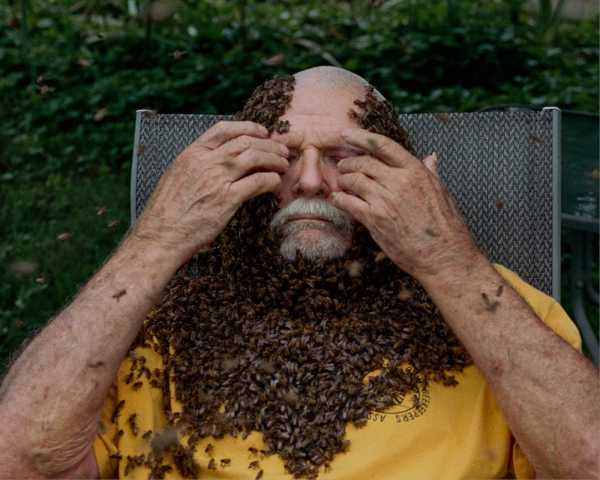 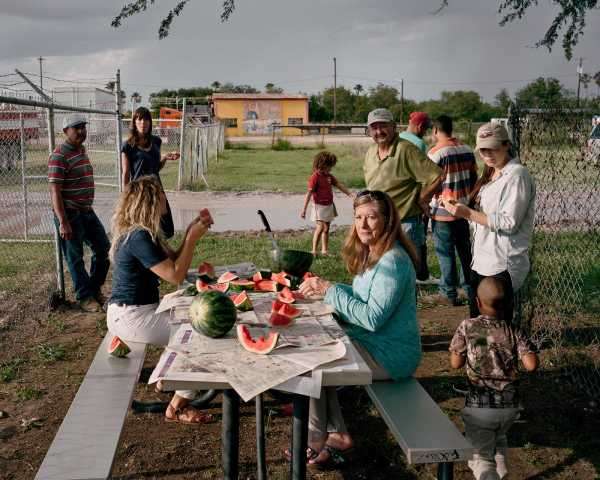 There was stasis; there was silence. Something happened, and then it was as if nothing had transpired after all. Photographs, by their very nature, can capture this frightening, fulsome dichotomy, and the best photographers can capture it again and again. This is Hatleberg’s talent. His images only appear to be forthright, to lack interiority. The depths are all on the surface. The depths have risen to the surface. The photographs testify not so much to “time’s relentless melt” (Susan Sontag’s phrase) as to time’s immutability, containing at once both future and past. Within each moment rests the aftermath. 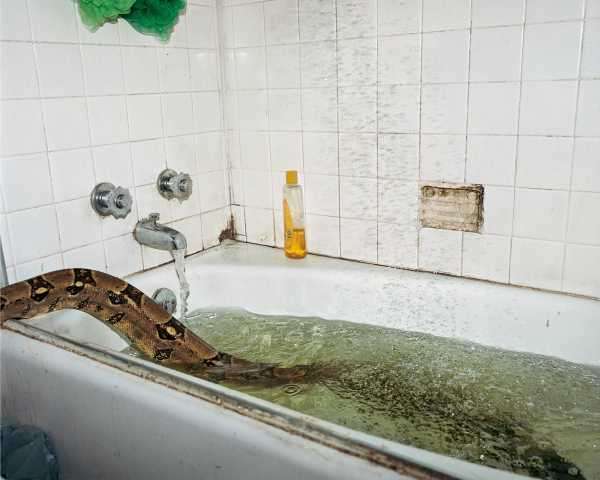 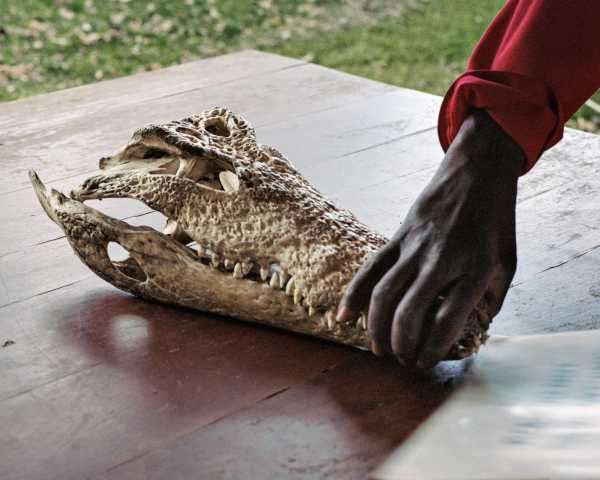 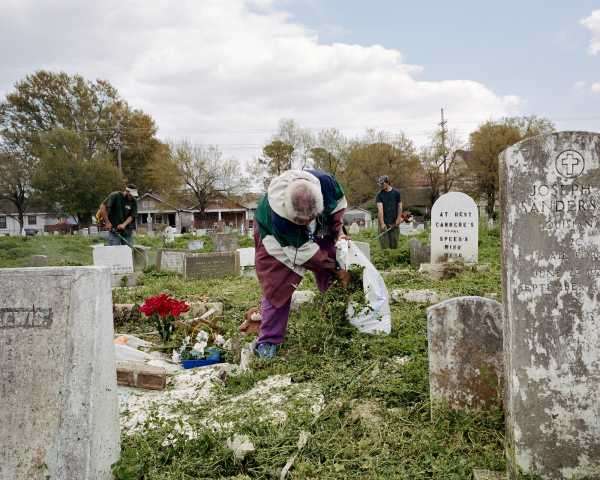 There is the snake making its way through a bit of filthy water, then two snakes in a blue kiddie pool (one appearing somewhat compromised), then a limply malodorous snake being held by a girl in the plein air of concrete rubble. 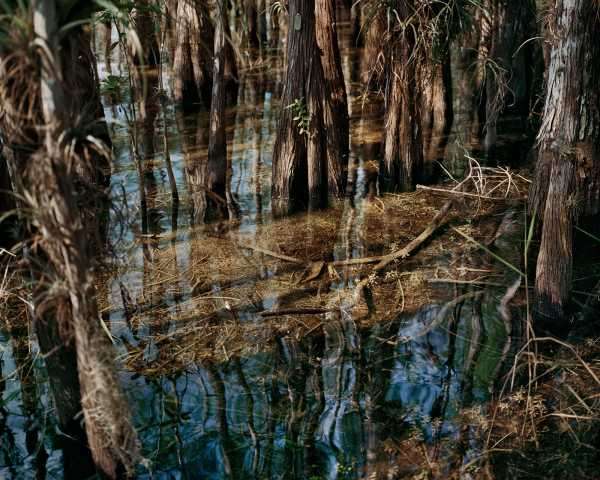 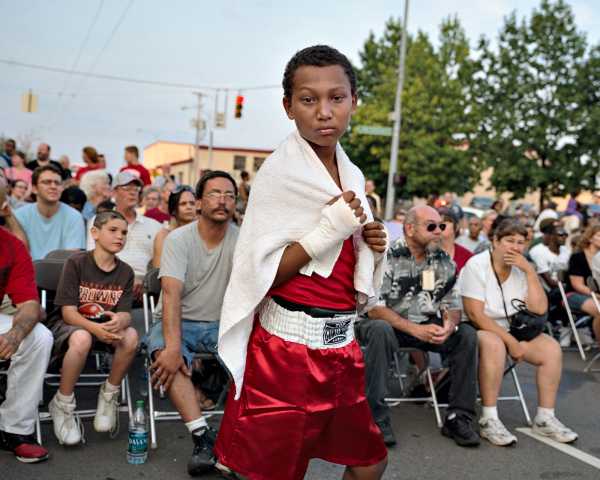 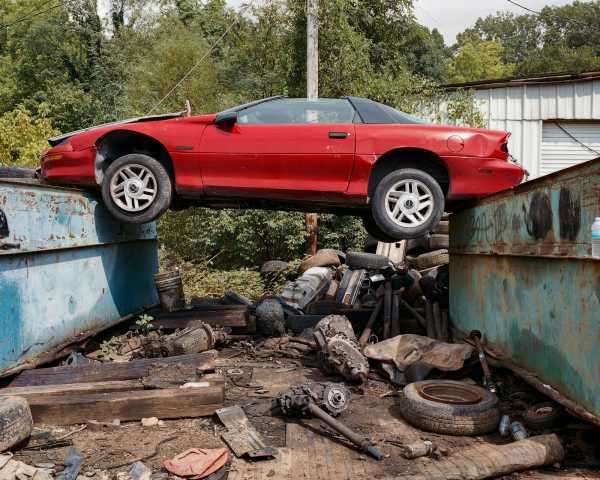 There are the cars. So many cars. Colorful, ruined, inoperable, piled in luxurious disarray in a raw clearing beneath towering trees in that eternal rural mainstay, the junk yard. There is the red sports car, poised between two dumpsters, perfectly aloft, as if, having been driven to this place and knowing its fate, it were attempting to escape. On a bit of earth visible in this smashed metal jungle, men are digging holes, not so much a Sisyphean task as a Gurdjieffian one, a task arduous and unnecessary at once, without its existential honor. The car smacked in the intersection surrounded by those known as first responders will soon be delivered to this thriving dump—the moment has already occurred. The non-future of the establishment that offered pool, billiards, even more (the disclosing letters have fallen away) was assured even when its sign was bright with burning bulbs. 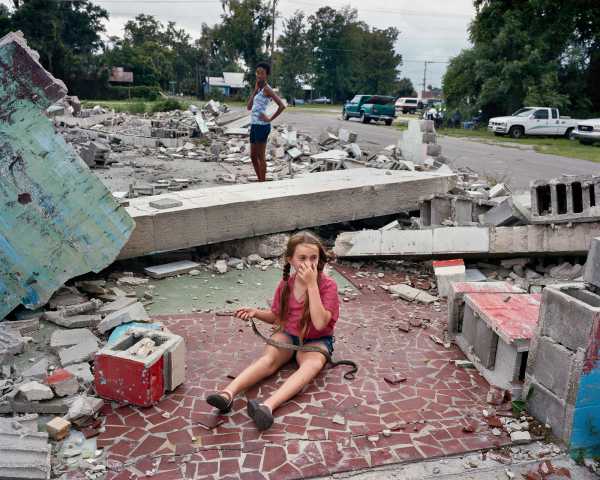 The standing water in these photographs is its own signifier. The water reflected in Hatleberg’s eye, in the world he is chronicling, is slack, slick with torpor. It lies on the compacted soil of the junk yard and the cement steps of homes. Its oily sheen coats the alleys and the marshes. Only once does it appear fresh, alive, sustaining the figure borne on the river at peace, as if in a dear dream. 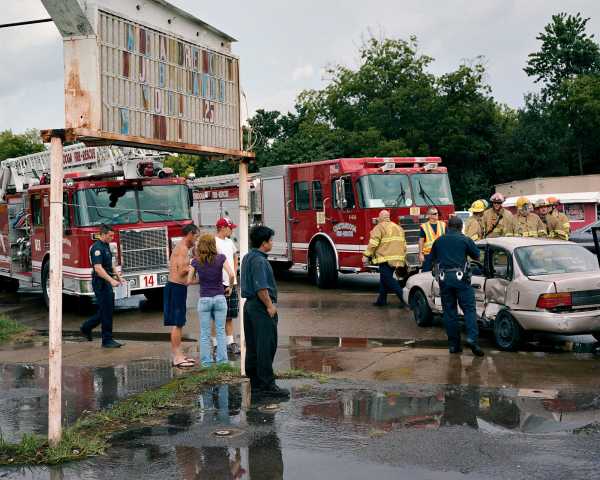 “Untitled (After the Rain).”

Otherwise, nature’s balm or beauty is unencountered. Sullenly, weeds (aftermath for sure) engulf graveyards or littered lanes, though a single insect, a mantis, provides some bemusement as it clings to a woman’s hand. The atmosphere is weary, post-consumerish. No one seems to possess anything. The men and boys are often shirtless, the cars cannibalized. There is beer, and there are bees bearding the faces of men; there is a peeling painted sign offering honey, but there is no honey. There is a picnic, but only watermelon is being served. Carved on the wooden bench is the old, rude, familiar greeting. An ice chest harbors only ice. No one is eating anything or making anything or going anywhere.

The young couple in an unusually well-maintained vehicle, creamily upholstered, appears to be at a particularly peculiar dead end. The photo is beautifully composed—the youth’s slim torso, the light on his face, the young woman’s crisp and haughty profile—but what curiously engages us is the pine-tree air freshener on the rearview mirror. An ironic air freshener, certainly, for this is Perry, Florida, home to an enormous cellulose plant. The land’s commodity here is pine, logged in an eternal hellish cycle of slicing and shredding, producing what is called “specialty and fluff pulp,” essential to a great many useful and disposable items. 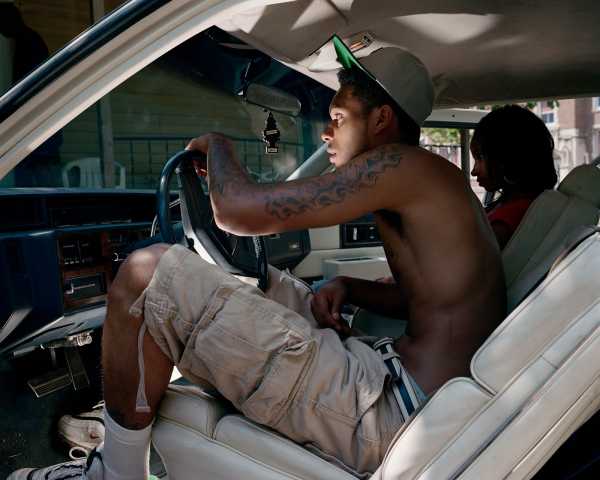 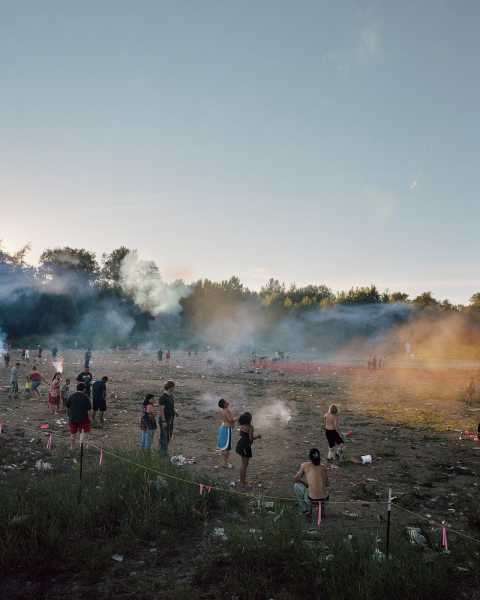 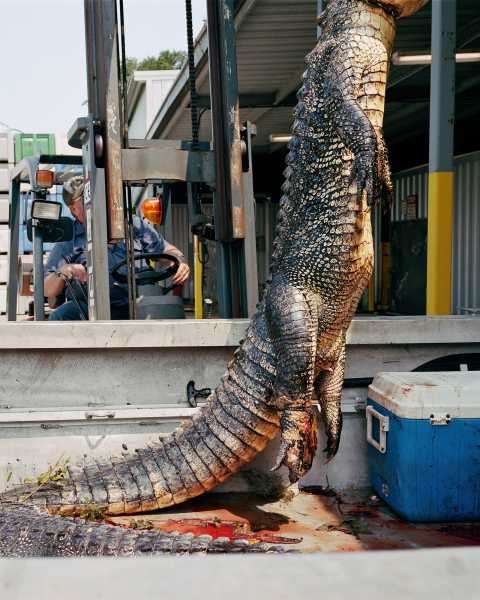 There is an extraordinary sunset in one of these photographs, but the lone human figure is facing away from it, his hand pressed against the blankly white wall of a building. He might be at a door waiting to be admitted, but there is no door. The lack of a door is not much different than the doors elsewhere depicted—the busted and broken ones, their screens keeping nothing out and nothing in, the boarded-up ones. There is a door painted with polka dots. The effect is not merry. Hatleberg doesn’t go within, so we don’t go within. He doesn’t have to, so we don’t. We are here with him in this place. We see only what he sees.

Now we are before three women. One of them wears a key around her neck on a loop of braided cloth. It is neither accessible nor decorative, yet our eye is still drawn to it, as is Hatleberg’s, more than to the sparklers the women are holding, for the sparklers’ modest sizzle is engulfed by the background of gray industrial jumble. Now we are on the edge of a sordid clearing where some manner of fireworks display is being undertaken. But it is still day, and there is no extravagant show of colors—only smoke and the detritus of packaging. 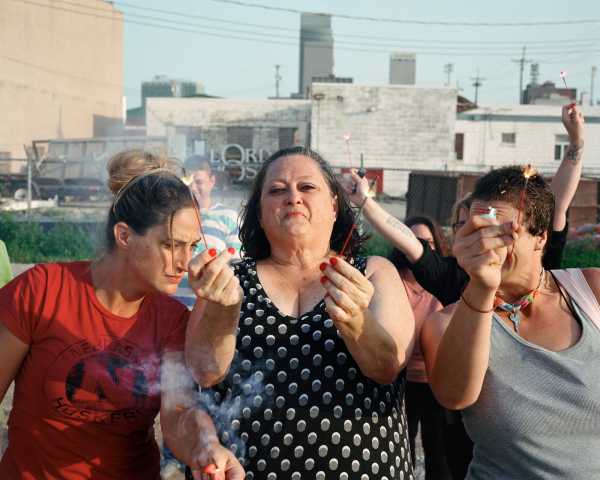 But something has taken place. A celebration of sorts. The streets have been closed off, the light is red, and the audience, seated in rows of folding chairs, is politely waiting. There is a beautiful sloe-eyed boy in red, silk boxing trunks, like a prince ready for engagement, for battle. He even appears to be wielding a staff. But it is only a ubiquitous electric pole, a trick of perspective. The boy looks dramatically, royally, out of place here, but he is part of the program. And what is the program? It is forgotten without ever being quite remembered. Lives can be lived without practice, without involvement or necessity. This is what Hatleberg’s patient eye discloses. Our celebrations have become obscure, our works enervated, our habitations derelict. The plastic flowers adorning our graves have been found to be not so pretty and enduring after all. 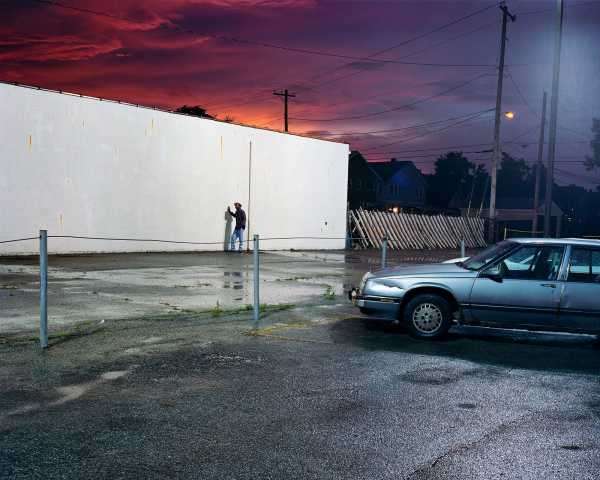 This is drawn from “River’s Dream,” published by TBW Books.