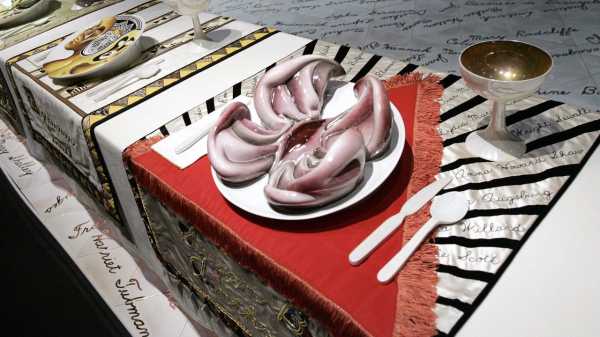 What to do with Judy Chicago’s “The Dinner Party”? Put it on a pedestal, and many will shout it down, as several politicians (all men, all outraged) did, during a televised congressional debate, in 1990, when the art work was offered a permanent home, at a proposed museum at the University of the District of Columbia. Put it in storage, where it languished for the better part of fourteen years, between 1988 and 2002, and the injustice rankles. It’s likely that no one felt it more keenly than Chicago herself, who, when she heard of Elizabeth Sackler’s plans to acquire and build a center around the piece at the Brooklyn Museum, “fell into her soup,” Sackler told me recently.

A new show, “Roots of ‘The Dinner Party’: History in the Making,” which opens today at the Brooklyn Museum, is the first museum show to examine the creative process behind the work and its tortuous path toward acceptance and acquisition. After the exhibition’s début, at the San Francisco Museum of Modern Art, in 1979, it embarked on a nine-year tour across the United States and abroad, where it drew record-breaking crowds and sterling reviews. Yet, from 1979 to 2001, when Sackler purchased the work, Chicago found herself unable to secure for it a permanent platform, which had long been her goal. What gives?

Part of the problem was logistical: “The Dinner Party,” which Chicago completed in 1979, before room-size installations became standard selfie fodder, is enormous. A triangular banquet table, it includes seats for thirty-nine women from across history and mythology. Each side of the table is forty-eight feet long, and each setting includes a large porcelain plate, an embroidered runner and napkin, a chalice, and a clunky set of utensils. Beneath the table, a “Heritage Floor” includes twenty-three hundred and four porcelain tiles bearing nine hundred and ninety-nine additional names (for a total of a thousand and thirty-eight women). Then there are the banners. At the Brooklyn Museum, visitors walk beneath six woven hangings to reach the room where the table resides, each one boldly colored and inscribed with a phrase (“And She Gathered All before Her”; “And She made for them a Sign to See”). Chicago takes a holistic approach to the work’s presentation. “Chicago will not show ‘parts’ of the Dinner Party; it’s all or nothing,” Jane F. Gerhard, the author of “The Dinner Party: Judy Chicago and the Power of Popular Feminism, 1970-2007,” from 2013, wrote to me in an e-mail. “The piece is incredibly big and complicated and requires a large space as well as a specially trained team” to set it up.

The other problem is more obvious to some than to others. Let’s not mess about: the plates look like vaginas. “Vulvar” is the word Carmen Hermo, the curator of the Brooklyn Museum show, uses to describe them. Each fourteen-inch porcelain plate is a unique sculptural object, designed to reflect the woman it represents. The “Emily Dickinson” plate is pale pink, with folds that resemble lace; the “Snake Goddess” plate, named for the Cretan deity, is gold, brown, and ivory, after statues excavated from Knossos and elsewhere. The “Georgia O’Keeffe” plate, which has the green-and-purple coloring of an artichoke, rises so far off the table as to nearly stand on its own. The settings feature deep centers and layers that extend outward, like the interior of a flower or, yes, female genitalia.

All these soft organic lines and shallow impressions were not initially cause for alarm. When Chicago finished the work, with help from a community of women, and some men, five years after beginning it, enthusiastic fans organized dinner parties for real women in its honor. At SFMOMA, where it received more than ninety thousand visitors, thousands waited for hours to see it in person. One visitor, describing the solidarity she found in a three-hour line, recalled a small group in the final waiting hall who were singing “quietly and beautifully” and “were surprised by the applause. Then the singing spread to the people around them—and then everyone was singing.”

Then the tune changed. Two American museums that had been scheduled to show the work pulled out. “It was the first inkling Judy had that this was not going to erase decades of entrenched institutional sexism,” Hermo said. Gerhard describes how Chicago’s team worked with community groups in Houston, Boston, Chicago, Cleveland, and Atlanta to organize showings outside traditional museums. (The Brooklyn Museum was the only other American museum to show the work, in 1980–81.) “After this kind of D.I.Y. hyper-success, it still was not acquired by a museum. I think that really challenged Judy.”

At the Brooklyn Museum, a few days before the show’s opening, a petite Chicago, now seventy-eight, stopped in to check on the installation’s progress. She was wearing a leather motorcycle jacket and a T-shirt which read “EQUAL RIGHTS NOW: CONSTITUTIONAL EQUALITY FOR ALL.” Her hair was dyed a bright pink and she wore chunky silver bracelets on both wrists. Tiny cat earrings dangled from her ears.

“Oh, my God!” she said, standing before a seventeenth-century embroidery from the museum’s collection. “O.K., this is stumpwork. It is one of the kitschiest needle techniques on the face of the earth.” She used the same method for the Mary Wollstonecraft runner. “I wanted to create an environment that represented the kind of constraints a woman like her faced, socially,” she said. “You know, she was called ‘a hyena in petticoats.’ ”

She considered a coffee mug on display, painted with rounded vulva-like shapes. “We take for granted phallic imagery. People don’t walk around New York saying, ‘Oh, look at that prick with a point,’ ” she said. “I was interested in whether or not it was possible to build a universal language based on female experience.” She added, “At the time that I was doing this, people just freaked completely out.” She paused. “Now we live in the age of Instagram sites like Club Clitoris and Vagina China. All these people follow me. You should go on their Instagrams—it’s fabulous what they’re doing.”

In 1990, when the board of the University of the District of Columbia voted to purchase the work, it needed approval from Congress; the resultant eighty-seven-minute congressional debate aired on C-SPAN. (Robert Dornan, a Republican congressman from California, called it “3-D ceramic pornography.”) “It wasn’t really a debate, was it? None of them had seen it,” Chicago said. “I was like, an hour and twenty-seven minutes about ‘The Dinner Party’? When did they run the country?” The work stayed in storage.

Scattered throughout the Brooklyn show are test plates, preparatory drawings, research cards that Chicago’s team assembled on three thousand notable women, and letters from collaborators and admirers, including a facsimile of a handwritten note from Adrienne Rich, dated December 22, 1975. “I am plunged into a swirl of work after a marvelously peaceful 12 days in the sun in Mexico,” she writes. “The last day was very intense, seeing the Frida Kahlo house and her work: do you know her? She deserves to be seated at the D.P. if any woman artist does.” (Kahlo’s name is included on the “Heritage Floor.”)

“We had thousands of them,” Chicago said, bending over a case of file cards, one of which read “Alonso, Alicia, c. 1925, Cuba, Dancer.” “This is the kind of books there were,” she said, as she gestured to a stack of worn hardcovers with titles like “Women Painters of the World” and “Music and Women.” “Everywhere I went, I went to the used bookstore. Nobody cared about these books. I bought them for a dollar.”

In the triangular room where “The Dinner Party” resides, the lighting has been rejiggered for the show, so that the floor tiles reflect light onto the backs of the runners, as Chicago originally intended. “It looks good. Don’t you think?” she said. Her husband, the photographer Donald Woodman, lingered nearby, wearing glasses with electric-green frames and a shirt bearing the word “Feminist.” I asked Chicago why she thought it took so long for the work to be acquired. “The first and single most factor is real estate,” she said. “How much real estate is accorded to women in museums? There was the shock and challenge to the idea that male-centered art is universal. Universal to whom?”

She went on: “ ‘The Dinner Party’ is a triangle, with equal sides to symbolize equality, but it was also intended as a wedge”—she made a triangle with her hands—“into all of those assumptions,” she said. “ ‘The Dinner Party’ tells a very long historical story. The plates rise up, and the plates go down; push forwards, push backwards. Now we’re in a period of pushing backwards. Yes, there have been a lot of changes. Are they sufficient? No. Or Harvey Weinstein couldn’t have gotten away with it for three decades.”

A popular debate after the work’s début revolved around replacing the canon. Could it be done? Chicago let out a joyful laugh. “I’m an artist!” she said. “I don’t think I have enough power in my hand, or my paintbrush”—she held up a small fist—“to disrupt the entire canon of Western art. I do not believe I’m that powerful. If you can do it, knock yourself out. The most I can do is say, ‘Hey, move over, and let us in! Let us in!’ That was hard enough.”