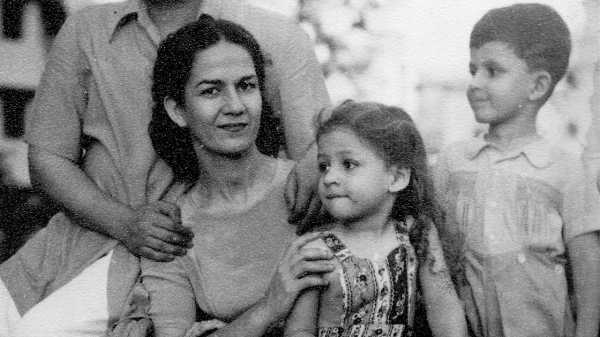 In 1987, the year before the release of Salman Rushdie’s “The Satanic Verses,” the novel that would lead Iran’s Ayatollah Khomeini to declare a fatwah against the author, his younger sister Sameen roped him into a literary project of her own. She had spent the previous four years working on a cookbook modelled, in part, after what the siblings ate as kids growing up in an affluent Muslim household in nineteen-fifties Bombay. As she neared the book’s completion, she needed a recipe tester. “My instructions were to follow the recipes exactly and then tell her if they produced the right taste,” Salman told me recently. He used a kitchen mallet to flatten and tenderize slices of beef for their late father’s favorite dish, “Steak à la Passandé,” a whimsical French name for a North Indian dish called beef pasanda (derived from the Urdu word for “favorite”). He doused lean chunks of lamb in coconut milk from a can to make a Mangalorean recipe given to Sameen and Salman by their childhood ayah, or nanny.

“Sameen Rushdie’s Indian Cookery” was released in the United Kingdom in August of 1988, a month before “The Satanic Verses.” The siblings both lived in London at the time, and had maintained a close bond even as the rest of the family had dispersed. (Their estranged younger sister moved to Berkeley, California; the youngest, Nabeelah, and their mother, Negin, settled in Karachi.) They were born only a year apart—Salman first, in 1947, the year of India’s Partition, the bloody national cleaving that he would allegorize in his magical-realist magnum opus “Midnight’s Children.” The secular Rushdies felt little impulse to follow their fellow-Muslims to Pakistan. “I was a post-partition child of parents who hadn’t yet crossed the border,” Sameen writes in her book. “We lived in cosmopolitan Bombay and had no orthodox training or identity.” In his 2012 memoir, “Joseph Anton,” Salman characterizes his sister as a “naughty girl” whom he’d often have to rescue from trouble with his parents. “Salman was the more serious of the two of us, always excelling academically at all he did, obedient and honest, a gift of a child to any parent,” Sameen told me. “I was a rebel at home and at school. I thought of rules as provocations, waiting to be challenged.”

Sameen’s cookbook, too, was a rebellion of sorts, born of her frustration with the food she encountered in restaurants in the U.K.—chicken tikka masala the color of radioactive orange sludge, flavorless and pallid biryanis. Indian food, she wrote, had been “shrouded in mystique and subjected to a mockery which has served to alienate many Westerners” from the cuisine. Her compact volume was accessible and pragmatic, featuring more than a hundred and fifty recipes from India, Pakistan, and Bangladesh which she’d encountered throughout her life. The book, whose cover featured Rushdie wearing a white-and-crimson-colored sari, smiling as she sits before a spread of bhindi and koftas and prawns, found a cult following among home cooks. British food writers such as Nigella Lawson and Alan Davidson have referenced Sameen’s recipes through the years. But the book fell out of print, and Sameen, who trained as a lawyer, went on to a career in adult education. Now, after three decades, her book has been released in the United States for the first time. It includes preparations for such unusual delicacies as nargissi kofta, a hard-boiled egg encased in an ovular meatball, which is native to Muslim pockets of northern India and Pakistan and is now seen as the progenitor of the Scotch egg, or maghaz, an offal masala made with calf or lamb brains, eaten in Pakistan and Bangladesh. But the main goal of the book, Sameen told me, was to re-create the feeling of her mother’s kitchen, and the everyday gastronomic experiences that she and her siblings enjoyed growing up.

The Rushdie children were never welcome in the family kitchen. “You’ve got the rest of your lives to cook,” Negin, their mother, would tell them, in Urdu, when they asked to help wash lentils for dal or peel away the knobby, scaly skin of bitter gourds for a side dish of squash with onions. “You will do it well when you have your own homes.” A teacher by day, Negin was skilled in the kitchen, though not in the hands-on way of most home cooks; like other well-off Bombay families, the family employed a bavarchi, a full-time cook, to whom Negin would dictate instructions. Negin firmly believed that the best cooking showed restraint, that only careless cooks used spices in large quantities, as if to camouflage other undesirable flavors in their food. It was a philosophy that guided nearly every dish, in Sameen’s memory, from karahi bhindi, okra stir-fried with half a teaspoon of red chili powder, two or three whole red chillies, and a half teaspoon of turmeric, to hari chutney main gosht, a delicately spiced lamb cooked in yogurt and flavored with a bright coriander chutney. Somehow, these became Sameen’s first cooking lessons, well before she went off to college, in Lahore, and began to cook on her own. 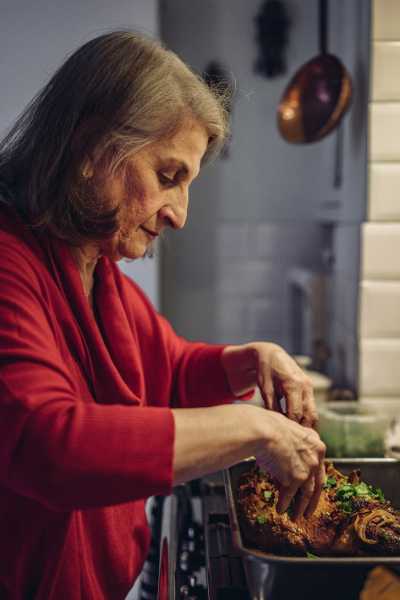 Sameen Rushdie prepares sabut raan, her family's version of a whole roasted leg of lamb, at home in London.

Despite their secular leanings, the Rushdies observed basic halal principles; their diet, heavy on red meat, in keeping with Negin’s Kashmiri roots, made them a minority among Bombay’s Hindu vegetarians. On weekends, the family would eat lunches together, often on family picnics that included dishes like cold shami kababs (patties of minced meat cooked with channa dal and spices) and paratha (an Indian flatbread). Sameen includes those recipes in her book, as well as one for kulfi, another weekend treat. A vender would arrive at the family’s doorstep with a wide-mouthed, round thermos flask filled with the Indian ice cream, flavored with cardamom, pistachio, and slices of mango. For evening meals, the children usually ate earlier than their parents, with their ayah looking after them. Much of what the kids liked best, Sameen told me, was what they called “English food,” which was actually a hybrid of Anglo and Indian cuisine—minced goat-meat cutlets and patties, or murgh, an Indian roast chicken that is mildly spiced, made on top of a stove, in a large, heavy-bottomed saucepan, rather than in an oven. Thumbing through Sameen’s book, one is reminded of what Saleem, the narrator of “Midnight’s Children,” called the “impregnation of food with emotions.” Like Salman, who in his fiction describes chutney “green as grasshoppers” and the scent of pakoras, fried vegetable fritters whose “spicy sweet fumes rose from a street-snack barrow,” Sameen is interested, she said, in food’s ability to trigger memory and deliver, through its familiar flavors and smells, a “sudden charge” of human feeling.

Like many children with roots in the Indian subcontinent, Sameen struggled somewhat to translate her family recipes into regimented, replicable techniques. “My mother’s relationship to quantities, weights, and measures was, to say the least, inexact,” Salman writes in a foreword for the new edition of his sister’s book. The volume’s first recipe is aloo gosht, a potato stew that Sameen first learned to cook during her teen-age years, when she still didn’t even know how to wash rice. The recipe is structured as an exchange between Sameen and Negin. Take “a few onions” and chop them, Negin instructed. Fry “about half” in ghee until they turn a pinkish-almondy color. The teen Sameen presses her mother for more exact measurements: How many onions? How much ghee? Negin may not be precise, but she is particular. She warns Sameen not to let the onions get too dark in the ghee, or they will change the final color of the dish, turning the gravy as dark as the kind served in roadside cafes.

Sameen has remained in London for four decades; Negin died in Karachi in 2003. Indian food, aided by culinary figures like Madhur Jaffrey and Julie Sahni, has come far in the decades since Sameen’s book was first published. “There is now a much greater willingness in people about cooking food from different countries, and home cooks are much more adventurous in their kitchens,” she told me. “There is also a much easier access to ingredients.” But Sameen is still guided by a mission to preserve her own family’s food traditions. “The globalization of communities means there are generations of people of Indian descent living in different countries in the West who are at risk of losing their home cuisines if they only eat Indian restaurant food,” she said. “My own daughters are two of them, and I can’t let this happen.” Salman has lived in New York City for nearly twenty years, but whenever he visits London he and his sons will gather with Sameen and her daughters at Sameen’s home. Sameen always does the cooking, and she always cooks Indian. “I once made the mistake of cooking an Italian meal,” she said. “The collective disappointment was very vocal.”