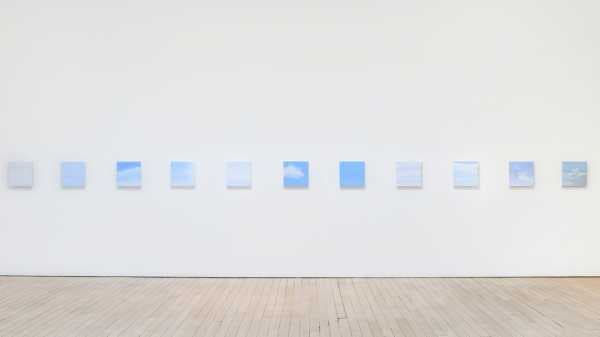 On January 7, 2001, the artist Byron Kim made a painting of a clear blue
sky. The blue is, more precisely, a deep, powdery periwinkle—a twinge
darker at the lower left corner of the composition than at the upper
right. The not-quite-monochrome painting looks like pleasure: a day
spent laid out on an off-season California beach, fingers nested behind
your head, gazing upward. Below the blue, on a naked stripe of wood
panel, are a few words written by Kim. “Clear, snow melting dripped into
the painting,” he wrote. “Every Sunday?”

That question quickly became a practice. On just about every Sunday for
the past seventeen years, Kim has made a painting of the sky,
accompanied by a few lines of diaristic rumination. (He isn’t
perfect—“Despite carrying a panel in the car all day yesterday, I forgot
to do a Sunday Painting,” he wrote on May 7, 2012, a Monday.) Now a
selection of more than a hundred of the paintings, arranged
chronologically, can be viewed at James Cohan Gallery in Chelsea. Until
the show’s closing, in early February, a fresh painting will appear
every Sunday, giving the exhibition some of the inexhaustible
iterability that characterizes Kim’s subtle, intelligent, and quite
moving project.

An installation view of Byron Kim’s Sunday Paintings at James Cohan Gallery in Chelsea. A new painting will appear every Sunday through the exhibition’s run.

Some of the fun of the Sunday Paintings is in their variance. The blue
sky is an ineradicable trope, but Kim’s minute, almost excruciating
attention to coloristic detail shows how much bounty the cliché
flattens. He deals in whites, grays, and subtle yellows and purples when
rendering clouds; his blues run, sometimes within a single painting,
from pale to near-royal—sometimes easy and weightless, sometimes thick
with approaching storm. Long brushstrokes suggest the direction of the
wind. Once or twice in his notes, Kim lets slip the intellectual
grounding behind his attention to the relationships among colors, and to
our groping efforts to perceive and to name them. Here he is on one
milky day: “White without context seems brighter than a blue sky unless
I call it grey. Then I would have to paint it darker. So
Wittgensteinian. Maybe someday I will be considered the idiot savant of
the abstract sublime.” In another entry, Kim mentions Wittgenstein
again, first quarreling with the philosopher’s contention that the sky
is “lighter than white paper,” then conceding that “he does, however,
have me questioning assumptions about matte and shiny. For instance,
what color, really, is my eye?”

This extends a career-long investigation: in Kim’s work, color is often
tethered to other, more abstract realities. His most famous painting,
“Synecdoche,”
was unveiled at the bombastic, self-consciously political 1993 Whitney Biennial.
The work, which now lives in Washington, as part of the permanent
collection of the National Gallery, is a mural-sized collection of
panels, each representing some skin tone. Together, the hues hint at a
heretofore unrealized racial utopia, modelled after various attempts at
coalition politics—Jesse Jackson’s Rainbow Coalition, or David Dinkins’s
“gorgeous mosaic,” or Martin Luther King, Jr.,’s Beloved Community. More
recently, Kim has presented a series of paintings that at first appear
to be entirely abstract: greens and russets and browns swirl and
commingle on the canvases; they look like psychedelic Rothkos, or
studies for murkier versions of Sam Gilliam’s curtain-like drape
paintings. The works turn out, however, to be closeup, hyperrealistic
renderings of actual bruises—suddenly, the aforementioned abstract sublime, coined in 1961 by the curator Robert Rosenblum to describe the emotional
effects of Expressionism, gives way to the solidity of physical pain.

Given Kim’s talent for games of rapid visual-notional association like
these, the Sunday Paintings might accrue all kinds of meaning:
meteorological, ecological, geographical. Place certainly matters: Kim
tends to mark where each painting was made—it’s usually Brooklyn, where
he lives with his family, or the greater San Diego area. On one gorgeous
painting, untroubled by clouds, he remarks, “I just realized these
Sunday Paintings will be really monotonous if we move back to Southern
California.”

A little more than a century ago, Wallace Stevens published “Sunday Morning,”
a poem that enacts, through sensual detail and religious symbol, a
classic post-Enlightenment pattern of conversion: away from Christendom
and toward a church of art. It
is possible to read lines like these as accompaniment to Kim’s
paintings: “The sky will be much friendlier then than now, / A part of
labor and a part of pain, / And next in glory to enduring love, / Not
this dividing and indifferent blue.” There are signs in the Sunday
Paintings of an effort to marry the passage of time, overseen by each
day’s “indifferent blue,” to the artistic, domestic, and emotional
exertions of a single individual. Work and life begin to resemble
devotion. (One running theme is Kim’s halting meditative practice.) “I’m
working on a painting about the light in Hopper’s ‘Sun in an Empty
Room,’ ” he writes on one canvas; the toss-away update, with that
wonderful article, “about,” speaks to painting’s utility not only as
art-object but as a vehicle for criticism, and it brings to mind another
iconic Hopper, “Early Sunday Morning,” in which light falling on an
empty avenue might be a comment on secularity: so much enchantment
without a form of worship to contain it.

Sometimes, in his notes, Kim discloses his impatience with his children,
or difficulties with his wife, and fumbles toward some correlation with
the weather, and with seasonal change. “Maybe I am more able to bury my
petty jealousies now that winter is lifting,” he wrote one March
afternoon. Early on in the series, he switched from wood panels to more
traditional canvases, and began to write directly onto the paintings,
instead of in a caption below; the effect is a further blurring of
contingent mental states and irreversible planetary facts. At one point
he declares himself “unseasonably depressed.” He mourns Michael Jackson
(“I guess the 70’s are officially over”) and grieves for the thousands
lost on September 11, 2001. “World Trade Ctr and Pentagon attacked on
Tuesday. Too sad for words,” he writes. Even sports commentary makes its
way in: “J. Lin just dropped 28 pts. and 14 assists in a win over the
Mavs. This guy’s for real.” This emphasis on the everyday makes the
Sunday Paintings cousins to the “autofiction” of contemporary writers
such as Rachel Cusk, Teju Cole, and Ben Lerner, which tries to make
reality, in all its boredom and tragedy, shimmer almost metaphysically.

It can be surprisingly mesmerizing to read Kim, painting by painting,
catalogue his life as an artist. He worries about shows, complains about
studio space, and hopes his paintings don’t get messed up in the rain.
Most hearteningly, maybe, he appreciates his co-laborers. After seeing
Martin Wong’s 2015 retrospective at the Bronx Museum, he rhapsodizes:
“What a great artist. It doesn’t need to be so complicated or sensational to be so good.”

Posters in the interior