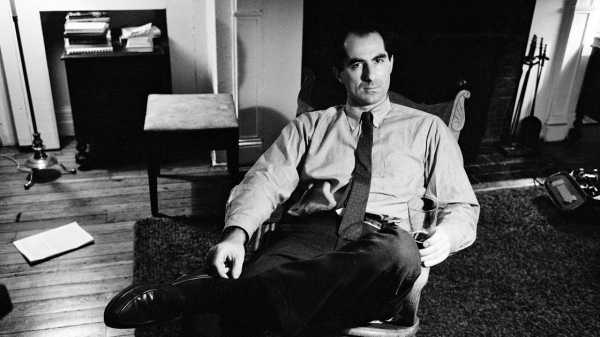 I walked to the mailbox and pulled out a sheaf of envelopes that included a letter from Philip Roth. I was twenty-nine and pregnant. I had written a book but assumed that no one would read it—and, anyway, I was preoccupied with three older children, a passel of miserable cats, barn spiders in the eaves of the house, and a pot of rice. I set down the pile of mail and didn’t open the letter. Assuming that it was an invitation to join a famous person for a cause or a favorite charity, I forgot about it.

As it turned out, the envelope contained a bona fide letter of appreciation from Philip Roth, a response to a story of mine that The Atlantic had just published, “Saint Marie.”

The day before, I’d bought a bag of shrimp that cost eight dollars. I had never spent that much money on an item of food. I had just stirred the shrimp into the pot of hot buttered rice when I opened the letter. I put the lid on the pot and tried to understand what I was reading. I was reading a letter from Philip Roth. He had typed it out and signed his name. It did not seem forged. I read the letter over and over.

Roth’s earliest works were fearless and fearlessly funny—then came the subtler beauty of “The Ghost Writer.” His work had struck down self-consciousness for me. I would write what I would write.

My guests, intimidating faculty from Dartmouth, arrived. When I took the lid off the pot, the shrimp had dissolved into the rice. Someone asked what the dish was called, and I said, “Mexican shrimp and rice.”

“Where’s the shrimp?” the professor said.

I pointed at some faint pink specks.

I had a letter from Philip Roth. He had taken the time to write. I felt that things might change.

That letter is somewhere in my accumulated stacks of paper. He also sent a quote for my novel “Love Medicine,” which I keep in a cardboard folder on my desk. For years, I occasionally saw Philip and Claire, then, after their divorce, just Philip. Life had thrown him around. Famously thrown him around. I had landed hard, too. It was a relief to talk to someone who made the worst stuff funny. We started talking more often, on the phone. Conversation with Philip was sometimes like being grilled by a precocious child. He zeroed in on something he didn’t know and would not stop asking questions. He wanted to know everything about Native-owned casinos, about tribal law, tribal citizenship, history. What it was like to grow up in North Dakota. Eventually, I gave him a book list, cautioning him to read it slowly so that he wouldn’t get depressed. “All right, Louise of the Dark Knowledge,” he answered. I never made a list for myself of the books he was reading, because they were so monumental—historical series that required intense and sustained concentration. I knew I couldn’t manage that, yet. Maybe once I was not living on the school calendar. Anyway, he showed me the way to age: read your way up the mountain. He was becoming ever more brilliant.

Last February, my daughter Kiizh and I visited Philip. He wrote down what I was reading—“Nomadland,” by Jessica Bruder. He was trying to understand what had happened to our country. I wish he had lived to see someone better in the White House. We got to talking about his early years. He described his first apartment in New York, a basement apartment. As he wrote, people walked by constantly. He could see their feet from his desk. Back and forth. And he had a cat, which would sit on his manuscript. I found it hard to believe that he’d had a cat. Suddenly, Philip pointed out that, when you get to a certain age, people see you and the first thing they say is “You look great!”

“That’s exactly what it means,” he said.

“The only one here who really looks great is Kiizh,” I said.

Philip looked at me, dumbstruck. I looked back at him, also dumbstruck. For once, he had no questions. There really wasn’t anything to say. Seventeen! Kiizh is good at silence. After a while, he gathered himself.

“What are you reading?” he asked her.

He smiled the most wonderful, euphoric smile.

“Oh! To read ‘Huckleberry Finn’ for the first time!”

“Seventeen. And already a copy editor!”