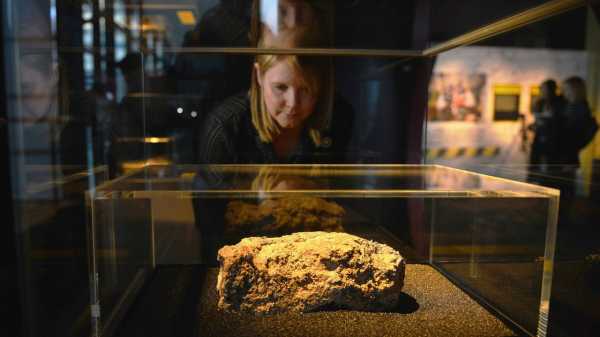 The piece of fatberg was slightly smaller than a loaf of bread and
looked like it might have come from the moon. It was putty-colored and
marked everywhere with geological-looking indentations, including a
cluster of fingerprints from when it was removed from a sewer in east
London, last October, and lifted through a manhole. On the surface,
there was also a dark fragment from an autumn leaf, which must have
slipped down the drains and into its maw. Emerging through the
congealed, calcified fat was the purple and orange perforated edge of a
Double Decker chocolate-bar wrapper. Every detail of the hideous object
was starkly visible because it was resting on a bed of black granules
under a spotlight in a glass box at the Museum of London, at the opening
of its new exhibition, “Fatberg!” I stared at it for a while, and while
I did so a tiny dark speck on the fatberg became animate and started to
move. A fly the size of a pinhead flew up and battered against the
glass.

Every large city in the world has fatbergs. They are horrible lumps of
fat and grease, often knitted together with wet wipes, condoms, and
other bits of plastic junk. In the U.S., they are known as FOGs—fats, oil, and grease—or, occasionally, FROGs, when they contain
roots as well. But no city has set out to own and revel in its fatbergs
quite like London has. The city’s sewer workers, who call themselves
“flushers,” came up with the name about ten years ago, when they began
to encounter the large, dense blockages in the capital’s Victorian
pipework. In 2013, a fatberg the size of a London bus was removed from a
sewer in Kingston-Upon-Thames. Two years later, forty tons of sludge
broke a sewer in Chelsea. The capital has a hundred and nine thousand
kilometres of sewers, and there are thought to be about five large
fatbergs in the system at any one time. It was after the discovery of a
fatberg in Chinatown, last summer, that curators at the Museum of
London, which has objects in its collection from Roman cesspits onward,
decided to try and get hold of a sample.

They got their chance in the fall, when a team of sewer contractors
stumbled on the capital’s largest fatberg to date, under Whitechapel
Road, in east London. “The beast,” as it was named by Thames Water, was
two hundred and fifty metres long and weighed a hundred and thirty
tons. TV crews arrived from around the world. Whitechapel is not far
from where I live, and, one morning last October, I stopped by during the
clearance operation. Several flushers were putting on white disposable
covers over their orange overalls, and preparing to don ear protectors
and breathing apparatus. (Fatbergs can emit sudden belches of hydrogen
sulphide, carbon monoxide, and methane.) In the underworld, fatbergs
undergo a chemical process known as saponification, which is how soap is
formed, and become extremely hard, scouring bricks and mortar from the
sewer walls. A health-and-safety worker at the site named Tracey Warne
told me that the team had initially tried to clear the Whitechapel
fatberg with high-pressure water jets, known as bomb hoses, but that it
hadn’t gone well. “One of them is still down there,” she said. “It has
gone sort of . . . in, and we can’t get it out.” The flushers had
switched to shovels and, at one point, a saw.

The artifact on display at the Museum of London is smaller than a loaf of bread but was cut from a fatberg that was two hundred and fifty metres long and weighed a hundred and thirty tons.

On October 4th, two pieces of the fatberg were cut off and placed in
Tupperware boxes at the city’s main sewage plant, which is
the largest in Europe, for the Museum of London exhibition. Andy
Holbrook, from the museum’s conservation department, was in charge of
making sure that they were safe to display. At the “Fatberg!” opening,
Holbrook was sitting next to large X-ray images of the specimens. “There
wasn’t really a road map for this at all,” he said. The X-rays showed no
sign of needles or anything sharp, which was good news, but the other
fatberg health risks included death from Weil’s disease, which is caused
by infected rats’ urine. At first, the museum considered showing the
fatberg Damien Hirst-style, in formaldehyde, but later opted to slowly
dry the pieces out over several weeks. Some red worms crawled out,
probably drain-fly larvae—of the type I saw, fluttering inside the box.
Mold grew. Holbrook, who is used to worrying about the museum’s other
sensitive artifacts, such as firearms, asbestos, and skeletons, was the
only member of the team to handle the fatberg directly. “It feels like
pumice stone,” he told me. “It’s lighter than you think.”

We were talking at the edge of the display, which included a pickaxe, a shovel, and a mannequin
dressed as a flusher. “The size and foulness of fatbergs makes them impossible to ignore and remind us of our failings,”
one of the captions on the wall read. London has always had disgusting
things in its drains. In 1846, fetid gases in the city’s river Fleet,
which had been covered over and filled with sewage for about a century,
detonated and destroyed three houses in Clerkenwell. The impetus for the
city’s Victorian sewer construction was the Great Stink of 1858, when
the House of Commons was almost forced to evacuate. I asked Holbrook how
he explained London’s contemporary fascination with its fatbergs.
“British toilet humor has got something to do with this,” he said.
“Fatberg!” is on display for the next six months, but Holbrook was
unsure how long the sample would survive after that. “I think we will
wait and see,” he said. “It might explode. It might turn into a hundred
million flies. We don’t know.” He paused. “I don’t think we are
completely committed to keeping it.”