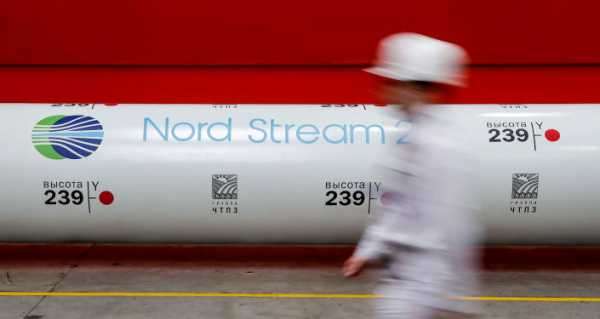 The $10.5 billion, 1,230 km long pipeline network – the first leg of which was completed last week, has been slapped with two rounds of US sanctions, the first of them temporarily disrupting construction. In late May, the Biden administration announced that it would partially waive restrictions on the pipeline’s operator and its CEO.

Russia does not attach much significance to the latest remarks by US Secretary of State Antony Blinken to the effect that the Nord Stream 2 sanctions waiver could be withdrawn, Deputy Foreign Minister Sergei Ryabkov has said.

“Regardless of further possible decisions by the US side, I think this project, which ensures the supply of the most environmentally friendly gas in the world to Europe (here I am addressing the US Secretary of Energy and her comments about ‘dirty gas’) – deliveries will begin and will work to the benefit of strengthening the energy security of the countries that receive it,” the diplomat added.

Ryabkov also stressed that Russia would not engage in any negotiations on the ‘conditions or criteria’ for the easing or lifting of US sanctions. “Time will pass, and I am confident that the United States will understand how flawed, senseless and useless their sanctions policy is, not only in relation to Russia, but also in relation to other countries,” he said.

Ryabkov’s remarks follow comments by US Secretary of State Blinken on Monday warning that the recently introduced sanctions waivers against Nord Stream 2 could be rescinded.

On 4 June, Russian President Vladimir Putin announced that the first of two parallel pipelines in the Nord Stream 2 project had been completed, and said that Russia was prepared to negotiate new energy projects with its European partners.

On Saturday, Geza Andreas, Germany’s ambassador to Russia, said that Berlin would not be changing its stance on Nord Stream 2, and that remaining US sanctions against the projects constitute a violation of international law. “Our stance on the matter is clear, and it will not change: we are convinced that the energy security of Europe, as well as European energy policy, should be determined by Europeans only, and not by foreigners,” he stressed.

Once completed, the Nord Stream 2 pipeline network, which runs from Russia to Germany along the bottom of the Baltic Sea, will be able to carry up to 1.9 trillion cubic feet (55 billion cubic meters) of gas per year, doubling the capacity of the existing Nord Stream network, which went online in 2011. In addition to pumping gas, the network will be able to carry clean hydrogen – a prospective fuel resource. Germany is one of the leaders of hydrogen fuel cell development in Europe, and is experimenting heavily with using the clean fuel for buses, trains and automobiles. Over the next decade, Europe as a whole is expected to set up some 3,700 hydrogen refuelling stations, with Berlin expecting to move away from the use of traditional internal combustion engine vehicles entirely by 2040.

While it has stood in step with its US allies on most other issues, Germany has consistently defended Nord Stream 2 despite Washington’s attempts to torpedo the project, citing its economic benefits and expected safeguarding of European energy security. The country’s interest in Russian natural gas is chiefly associated with its vast and growing requirements for clean fuel as the industrial powerhouse of Europe, and its move away from coal and nuclear power. Berlin and other European countries have also resisted US efforts to strong arm it into the purchase of US natural gas supplies, citing both its expense and the environmental damage caused in the process of obtaining and shipping it.