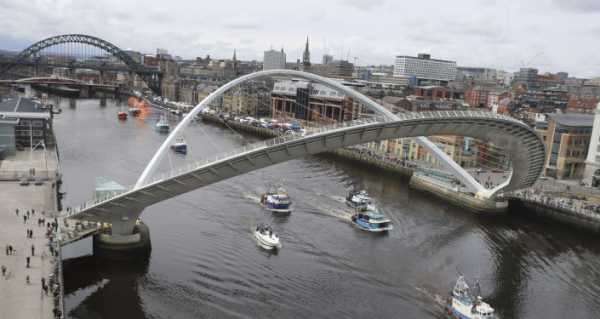 Liz Truss hailed a bright future in tech industries for north-east England the day before she signed a bilateral free trade deal with Japan, the first since the UK left the EU this year. Japanese carmaker Nissan employs 7,000 people at its Sunderland plant.

UK Trade Secretary Liz Truss has said post-Brexit trade deals could transform the north-east of England into a booming “Singapore-on-Tyne”.

Truss said 27 years of European Union (EU) membership had left the UK stuck “in the trade slow lane” and northern cities like Newcastle upon Tyne could become thriving hubs of the tech sector.

British trade with non-EU countries has grown ten times faster than the UK’s commerce with the 27 remaining members of the block over the past decade. More than half of British exports in both goods and services now go outside the EU.

In Tokyo on Friday, Truss and Japanese Foreign Minister Toshimitsu Motegi signed the finalised trade deal between the two countries. The British minister, who called the signing a  “landmark moment for Britain”, presented her Japanese colleague with a wry gift of a jar of Stilton cheese from posh London department store Fortnum and Mason.

Abolishing tariffs on the pungent blue-veined English delicacy had been a sticking point of talks towards the deal over the summer.

Truss said it was appropriate for “the land of the rising sun to welcome in the dawn of a new era of free trade,” calling the east Asian power a “key ally and major investor in Britain.” Japanese carmaker Nissan employs around 7,000 people at it’s plant in Sunderland, near Newcastle, which produces about 2,000 vehicles per day.

“This is a manifestation of the determination of Japan and the United Kingdom to carry on vigorously promoting free trade,” Motegi told reporters, stressing that the agreement had taken only four-and-a-half months to negotiate.

Talks on a post-Brexit free trade agreement with the EU almost collapsed last week. But European Commission envoy Michel Barnier returned to London on Thursday after conceding that the UK should be treated as a sovereign nation since leaving the bloc in January.