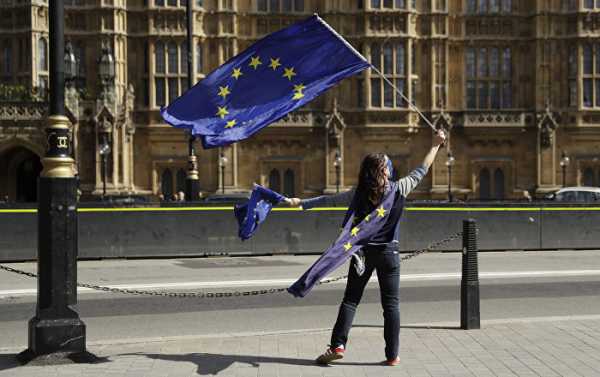 Several UK financial services enterprises have urged the government to strike a deal with the EU allowing British banks, insurers, and wealth managers to do business on the continent free of any possible restrictions.

Kristian Rouz — The British financial sector is ramping up its lobbying effort for a Brexit deal that would include provisions to maintain the existing rules on capital flows. The UK has enjoyed a boost in exports of financial services over the past few months, and lenders, institutional investors and wealth managers say losing such a source of income could hamper their business.

Brexit talks have resumed last week, and the City of London — particularly, the financial enterprises of Canary Wharf — are voicing their concerns that a ‘no deal’ Brexit could thwart their growth prospects. The bankers have said a ‘hard Brexit’ could result in the EU raising taxes on British capital, rendering the UK’s investment and loans to European companies less profitable — and less competitive in the continental market.

On the other hand, some have argued that the British government could cut taxes and deregulate the financial sector to boost business activity at home — a move that could potentially offset the losses associated with the loss of profits coming from Europe.

Amid this uncertainty, the majority of British financials say a Brexit deal on financial services would be a preferable outcome, making the post-Brexit environment more predictable.

“The EU is already talking about how it needs to amend equivalence rules,” Brian Polk of PwC in London said. “It is hard to understand why they would not engage with the UK’s suggestions. It feels like there is plenty of room to cut a deal.”

The cabinet of Prime Minister Theresa May has proposed the so-called ‘enhanced equivalence’ as a model for post-Brexit relationship between the UK and EU. The proposed system is akin to the framework that exists between the EU and several non-member countries. It would allow British financials to do business in the EU under the EU rules without facing excessive regulatory or fiscal hurdles.

The risk is, that under EU law, the European Commission can revoke equivalence recognition within 30 days after a written notice — meaning if British financials turn out to be more competitive than their European peers, Brussels could move to protect its market at any time. This makes London’s proposal less encouraging for Canary Wharf.

Meanwhile, many experts have little doubt that the UK’s financial sector is more sustainable and efficient than that of the EU, not least due to the global presence of British financials which have done lucrative business in East and South East Asia, North America, and Australasia for decades.

The European banks only have their presence in Eastern Europe to counterbalance the influence of British financials. Meanwhile, tthe banking sectors in Italy, Greece, and even Spain and France are to a certain extent facing capitalization woes and high levels of non-performing loans (NPLs).

“The harder Brussels makes it for London firms to do business with EU firms under EU rules, the more likely it becomes that London remains the EU’s financial center and the place where EU firms have to go to raise capital and manage risk, while remaining entirely outside the EU’s regulatory ambit,” Simon Gleeson of London-based Clifford Chance LLP said.

However, British lenders, insurers and wealth managers have also said that despite their sustainable position and fairly bright prospects at home, they are facing the risk of a mild capital flight from Canary Wharf to the EU’s financial hub of Frankfurt. This comes as some American and European banks have opted to move their thousands of workers to Frankfurt since the 2016 referendum.

But such a trend also makes it easier for British banks to do business at home, as competition for British customers is poised to become less severe.

The UK’s bankers also said that out of their £200 bln in yearly revenues, roughly half comes from domestic customers, while the other half is split between various regions — the EU being just one amongst them.

In this light, Canary Wharf, while somewhat in favor of a Brexit deal, is essentially easy when it comes to the post-divorce business landscape. The bankers’ prospects look good either way, particularly as the May cabinet has promised fiscal stimulus in case the Brexit talks do fall apart.