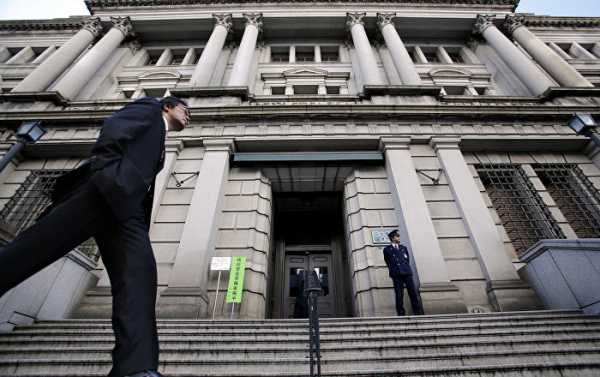 Last week’s rout in emerging market (EM) currencies and other financial assets has produced an influx of capital into safe-haven assets – including Japanese governmental bonds (JGBs), which could possibly thwart Japan’s plans to normalize its monetary policies at home.

Kristian Rouz — Japanese government bond (JGB) futures gained some ground amid capital flight from emerging markets (EMs), driven by last week’s depreciation of the Turkish national currency, the lira. Other safe have assets firmed as well, while the euro softened — despite the Turkish government reassuring investors that it has a plan to support its ailing currency.

The rise of Japanese bonds is poised to suppress the yield, adding downward pressure to the Bank of Japan’s (BOJ) base interest rates. This could potentially hinder the BOJ’s plans to exit its unconventional stimulus policies of negative- and zero interest rates (NIRP and ZIRP).

“In an environment like this, people sell currencies of countries that have relatively small foreign reserves and big external debt,” an anonymous currency trader in Tokyo said, as quoted by Reuters.

This suggests yet another wave of EM turmoil is hardly in the interest of the Japanese authorities, who have struggled to spur inflation and economic growth for the past several years.

Last month, JGBs hit their lowest point since January 2017 due to the expectations the BOJ would alter its policy by wrapping up bond purchases or tweaking interest rates. However, at this point the unsustainable influx of EM capital is expected to thwart any possible BJ plans to do so.

The turmoil in Turkey also dragged on the currencies of other countries facing similar challenges of elevated levels of foreign debt and low reserves — such as Mexico and South Africa. This happened despite these two countries having additional structural issues at home, which aren’t helping currency stability either.

But the yen, a safe-haven asset itself, is expected to appreciate against its major peers — hardly good news for the Japanese exporters, who typically enjoy higher profits overseas whenever the yen is weak.

“The yen is likely to continue to outperform even among the major currencies,” Tohru Sasaki of JPMorgan Chase & Co. said.

But the rout in emerging market currencies might wear down this week, as the Turkish government took step to reassure traders and investors of the sustainability of its economy. Turkish Finance Minister Berat Albayrak said Ankara has a plan to support the lira — the success of which could reverse the capital flight from emerging markets.

“From Monday morning onwards, our institutions will take the necessary steps and will share the announcements with the market,” Albayrak said.

The statement comes after the lira lost some 45 percent of its value this year, not least due to President Erdogan’s call for lower central bank interest rates against the backdrop of elevated inflation and sluggish GDP growth.

But the US sanctions and the Federal Reserve’s tightening of its interest rates have curbed the influx of dollar liquidity into the Turkish economy.

Albayak said the cabinet would implement a fiscal package aimed at supporting both the economic expansion and financial stability, while also complimenting the tight central bank policy.

“We will be entering a strong period in terms of fiscal policies,” he stressed.

Following his statements, Japanese government bonds (JGBs) slid 0.03 percent, but EM investors remain on high alert, awaiting further details from the Turkish government. Some say this week could be decisive for the EM economies, as an extended rout in developing nations’ assets could spark an international financial crisis akin to the Asian crisis of 1997.