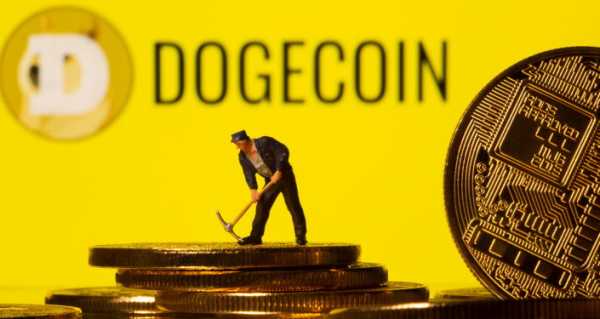 Dogecoin, which was launched in 2013 as a joke in a nod to the “doge” meme circling the internet at the time, has since become the fifth-largest cryptocurrency in the world. Tesla and SpaceX CEO Elon Musk has taken a particular interest in the digital currency, referring to himself as the Dogefather.

The much-touted appearance of Elon Musk, the CEO of Tesla and founder of SpaceX on NBC’s “Saturday Night Live” (SNL) had investors selling off dogecoin sharply after the tech guru spoke about it on the show.

Trading at around 70 cents and was selling for about 66 cents just before SNL went on the air at 11:30 pm ET on Saturday, it was soon down 24 percent and trading as low as 54 cents.

​Stealing the spotlight from other popular cryptocurrencies, like Bitcoin and Ethereum, the meme-based virtual currency Dogecoin soared to an all-time high this week ahead of the teased SNL appearance of the business magnate known for far-flung business ventures.

From self-driving cars to rockets bound for planet Mars, Elon Musk’s interest in a venture is sure to contribute to any buzz.

About 14 minutes into the show, as he brought his mother, Maye Musk, up to join him during his opening monologue, the tech billionaire joked about Dogecoin.

Elon Musk is known to be one of the biggest fans of the cryptocurrency, created as a parody.

Launched in 2013 as a satirical twist on the cryptocurrency frenzy, it features the face of the Shiba Inu dog from the “Doge” meme, and has since become the fifth-largest cryptocurrency in the world, with a market value close to $70 billion, according to Coinbase.

Dogecoin traders were reportedly anticipating that Musk’s appearance on SNL might be a market-moving event, according to Bloomberg.

Later onto the show, during the Weekend Update segment, Musk took on the role of financial expert.

“It (Dogecoin) started as a joke based on an Internet meme but now it has taken off in a very real way,” explained Musk. The host then produced a one dollar bill out of his pocket, which he waved at Musk, questioning whether the cryptocurrency was even real.

“Its about as real as that dollar,” said Musk, adding:

He then proceeded to explain to the co-hosts that the cryptocurrency can be traded for cash, with Michael Che responding, “Oh it’s a hustle.”

As to what prompted the dogecoin selloff, some suggest investors were holding out for Musk to say something more supportive of the cryptocurrency.

Others hinted at the likelihood of a “buy the rumour / sell the news” strategy in operation, according to CNN.
This would see attempts to capitalise on investors’ predictions coming true by selling high.

Ahead of the show, frenzied Dogecoin trading led Robinhood app to announce early Sunday morning it was having issues processing crypto trades.

Dogecoin had rallied in the lead-up to Musk’s appearance on SNL, after having been on a tear throughout the year. Up more than 12,000 percent since January, it gained 800 percent over this month alone, worth more than FedEx, General Motors and Nintendo.

The two aimed to create a peer-to-peer digital currency to ostensibly reach a broader demographic than Bitcoin. It was officially launched in December 2013.

The value of the Dogecoin (DOGE) cryptocurrency over the five days prior to January 29, 2021

Musk has been the loudest and most prominent supporter of the cryptocurrency, often tweeting about it in his typically “bizarre” manner.

​Despite being a strong advocate for Dogecoin, Musk has urged people to “invest in the cryptocurrency carefully”.