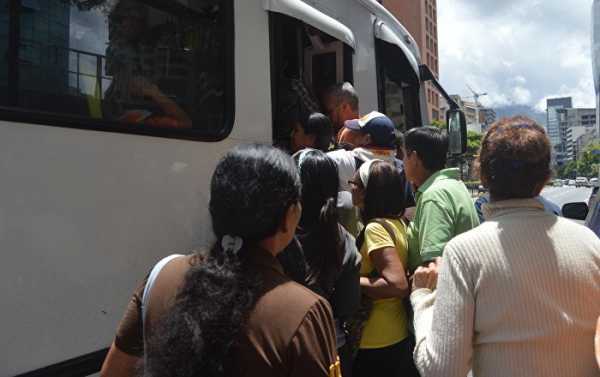 WASHINGTON (Sputnik) – The ongoing crisis in Venezuela will continue to take a toll on the country’s economy, resulting in accumulated GDP losses of more than 50 percent since 2013, the International Monetary Fund projected on Friday.

“Real GDP is projected to decline further in 2019, bringing the cumulative decline since 2013 to over 50 percent,” the IMF said in its newly published Regional Economic Outlook for Latin America and the Caribbean.

The IMF cited plunging oil production and worsening conditions in the non-oil sector as the primary reasons for the country’s GDP decline.

The IMF also projected a new wave of hyperinflation, as well as another surge in outward migration.

“Evolving political developments add another layer of uncertainty to the country’s outlook,” it said.

Commenting on the report, IMF Western Hemisphere Department Director Alejandro Werner said in a press briefing that the IMF has not yet seen a sense of changes in Venezuela’s economic policy in the last several months.

“It is very difficult to forecast what may lie ahead in terms of growth,” Werner said.

The statement was made amid the ongoing political crisis in the country: on Tuesday, the opposition-run Venezuelan National Assembly adopted a statement declaring President Nicolas Maduro a usurper. The day later,  opposition leader Juan Guaido proclaimed himself the country’s interim president at a mass rally in Caracas.

The United States, Argentina, Brazil, Canada, Chile and Colombia, among others, have recognized Guaido as Venezuela’s interim president, while other countries, including Russia and Mexico, have expressed support for incumbent Maduro as the country’s democratically elected leader.