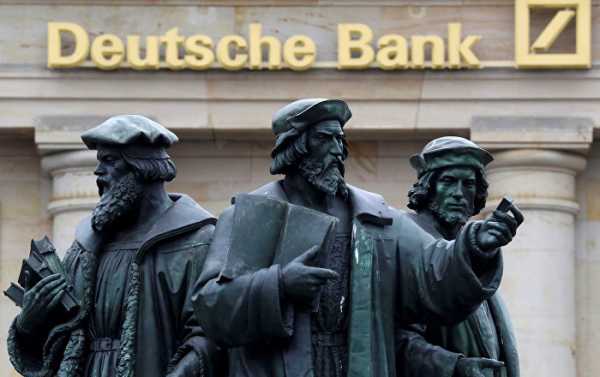 The German government is expecting a dramatic slowdown in the nation’s GDP growth rate this year due to a decline in business confidence, weaker consumer demand, and mounting overseas risks.

Kristian Rouz — The German economy is under pressure, and government officials are expecting a dramatic slowdown this year. Recent reports suggest that weakness in Germany’s manufacturing sector, subdued business and investor confidence, along with expectations of a ‘no-deal’ Brexit could derail the robust expansionary cycle that has lasted five years.

According to the German government, its official forecast of GDP growth this year is in for a downward revision, to 1.0 percent from the 1.8 percent projected previously. Officials also said they expected the German economy to expand by 1.6 percent in the year 2020.

The report comes amid the concern that the German economy could be losing its momentum due to the lingering Brexit uncertainly, international trade tensions, as well as a slight deterioration in domestic demand.

A separate report from the Munich-based Ifo Institute found Germany’s business confidence has declined in January. Ifo’s index of business sentiment dropped to 99.1 points this month from 101.0 points in December.

The think-tank’s index is based on the feedback of 9,000 German enterprises in the services, manufacturing, trade, and construction sectors of the economy. This latest weakening could reflect a widening caution that is spreading across the German private sector in the face of a possible slowdown in the global economy, and the upcoming Brexit.

Meanwhile, the German government also said the nation’s GDP growth rate for 2018 is expected to come in at 1.5 percent, compared to 2.2-percent annual growth in both 2016 and 2017.

Amid the alarming report, officials in Berlin appear to be seeking ways to minimise risks to the economy, as German Economy Minister Peter Altmaier suggested the EU could ‘seriously consider’ re-opening Brexit talks with the UK.

The EU previously said the proposed Brexit deal could not be renegotiated, but after the British Parliament rejected the accord, while also expressing confidence for the cabinet of Prime Minister Theresa May, the prospect of a no-deal Brexit became more realistic.

“The increasing danger of hard Brexit has proven to be a mood-killer,” Alexander Krueger of the Bielefeld-based bank Bankhaus Lampe said. “This is mainly a reflection of falling expectations, which is not surprising, given it is also the result of global trade disputes.”

In this light, Altmaier said a ‘hard Brexit’ could still be avoided.

“A no-deal Brexit must be avoided. This is the priority, the key priority,” the German Economy Minister said.

He added that a ‘hard Brexit’ would damage the UK’s economy, but it could also affect GDP growth in the Eurozone, including Germany.

Meanwhile, some economists say German business confidence was also hit by the ongoing dispute between the EU and the US over imbalances in bilateral trade, disproportionate customs tariffs, and the trade in industrial metals and high-tech equipment.

German exports have fallen after US President Donald Trump urged reciprocity in bilateral EU-US trade. While a Trans-Atlantic trade deal could still be a possibility, it is likely months, if not years, away, as Trump’s main focus is currently on China.

In the meantime, Germany has to find new exports markets elsewhere to support its GDP expansion.

However, some experts are still optimistic about the state of the German economy. They say Berlin has avoided a recession, while the recent weak data could reflect brief confusion among consumers and businesses, caused by the mostly-negative or contradictory news cycle.

“Looking ahead, we think consumption will pick up. Real wage growth is firm, and the recent plunge in growth of goods spending won’t be sustained,” Claus Vistesen of Pantheon Macroeconomics said.

Overall, economists say, the German economy remains on a solid footing and is unlikely to plunge into a recession anytime soon.