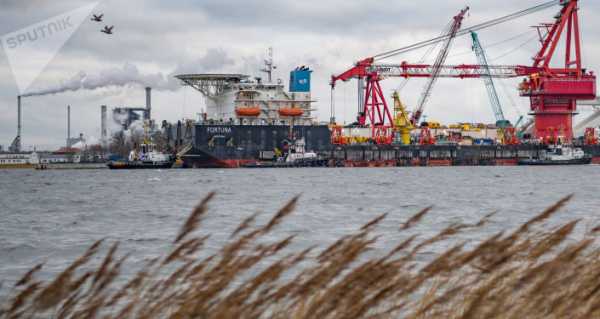 Previously, the United States passed legislation paving the way for new sanctions against Nord Stream 2, which is already under sanctions, with some contractors forced to withdraw from the joint Russian-European project.

Germany’s stance on the Navalny case should have no bearing on the construction of the Nord Stream 2 gas pipeline, German Economy Minister Peter Altmaier told Bild.

On 23 and 31 January, several unauthorised rallies in support of vlogger Navalny rocked Russia. He recently returned to Russia from Germany where he was being treated after allegedly being poisoned with Novichok.

Meanwhile, three diplomats from Germany, Poland, and Sweden who took part in the illegal protests in Russia have beemn expelled from the country.

The protests resumed on 2 February after Navalny was imprisoned for violating probation terms linked to an embezzlement conviction.

The previous US administration urged the EU to buy American liquefied natural gas instead of Russian pipeline gas. The bloc ignored the call and proceeded with the construction of the joint project with Russia – Washington then threatened to impose sanctions against some of the contractors working on the pipeline. The US also passed legislation ordering sanctions against any entity helping to build the project.

President Joe Biden has described the pipeline as a “bad deal for Europe,” and his administration is expected to impose further sanctions.