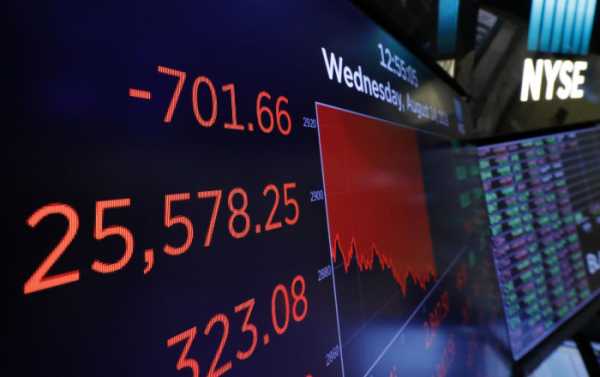 Wednesday trading saw the US’s largest stock index plunge by well over 700 points amid the escalating US-China trade spat, along with the geopolitical conflict in the Persian Gulf, the Hong Kong protests and the UK’s looming exit from the European Union.

The Dow Jones Industrial Average sank by 731 points on Wednesday, shedding 2.78 percent of its total value as of shortly after 2pm EST, with the S&P 500 Index taking a similar hit, dropping 80 points, or 2.74 percent, and the Nasdaq losing 237 points, or 2.96 percent.

All three indexes showed a decline after short and long-dated yields for US Treasury bills inverted for the first time in over a decade, with analysts taking the inversion as a potential sign of an imminent recession.

“The markets are really worried now. Germany and the UK will almost certainly go into recession in the next quarter and the US bond yield curve inversion is a strong indication that the US could follow suit next year,” Yannis Koutsomitis, a Belgium-based political and economic analyst, said.

“But also the data from China are not looking good, with industrial production hitting a multi-year low,” the analyst added. According to Koutsomitis, the Dow’s drop may be confirmation that the Trump administration had “shot itself in the foot” with its trade war with China, with other factors, including the conflict brewing in the Persian Gulf, the protests in Hong Kong, and the UK’s coming exit from the European Union, also playing a role.

Earlier Wednesday, new figures from Germany’s Federal Statistics Office showed second quarter growth falling by 0.1 percent, with total 2019 growth projected at just 0.5 percent, down from 1.5 percent in 2018. Last week, the British Chamber of Commerce in Germany, a UK-German business association, warned that a no-deal Brexit come October would wreak havoc on both countries’ economies, and plunge Germany into a full-fledged recession by the fourth quarter.

According to Polleit, investors may have “become spooked” by the inverted yield curve for the 10 year and 2 year bonds, given that “in the past,” this type of thing “often preceded a recession.”

“However, this time may well be different for two reasons. First, bond yields in general have become highly distorted by central banks’ market interference. As a result, movements of the yield curve should have lost pretty much any predictive power. Second, monetary policies have become increasingly obsessed with the idea of pushing interest rates into negative territory – and the long-end of the US Treasury market seems to be responding to the forthcoming ‘new monetary policy regime’,” the economist explained.

“One thing is pretty certain, though,” Polleit stressed. “Central banks are about to debase the purchasing power of the currencies by making yields negative in real terms in the coming year. By doing so they presumably hope to reduce the economies’ debt burdens, in particular providing financial relief for ailing governments and banks in particular –while telling the general public that such a policy would be good for the economy.” 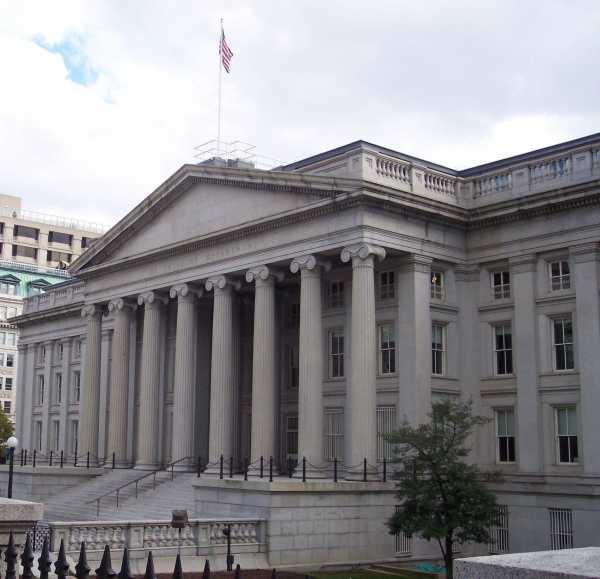 Michael R. Englund, chief economist at Action Economics, a California-based financial services company, similarly suggested that Wednesday’s drop in the markets was nothing to be concerned about, saying the “risk on”/“risk off” oscillations seen today “appear to have little correlation with economic activity and prospects.”

“Note that, overall, US stock indexes have risen dramatically over this expansion, and over the last three years in particular, despite the recent downswing. And, nearly all US consumer confidence surveys show near-record highs, despite earlier all-time highs for some measures in late-2018,” the economist explained.

According to Englund, although the market has expressed uncertainty regarding the US-China trade war, Hong Kong and Brexit, “US macro data keep showing persistent growth, and weekly and monthly labour market measures show that jobs continue to grow and the labour market continues to tighten.”

“The expansion has proven quite long, and longevity alone may suggest a recession over the coming year or two, but I wouldn’t take daily stock market swings as providing much insight on the timing,” Englund stressed. 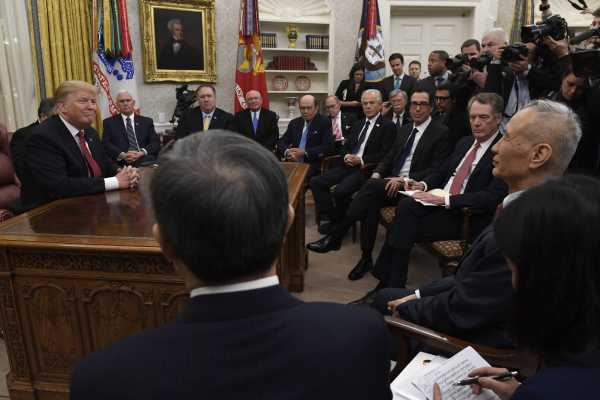 President Donald Trump, left, holds a meeting with Chinese Vice Premier Liu He, right, in the Oval Office of the White House in Washington, Thursday, Jan. 31, 2019

Wednesday’s stock slump hit despite President Trump’s announcement earlier this week that he would be delaying the introduction of new 10 percent tariffs on the remaining $300 billion in Chinese imports into the US, saying he didn’t want to hurt US shoppers ahead of the Christmas holidays. Previously, Trump had promised to slap the tariffs on Chinese goods effective September 1. Instead, tariffs will now be slapped on items including certain toys, cell phones, laptops and videogames starting December 15.

The US-China trade war began in 2018, when the US slapped tariffs on some $50 billion in Chinese goods, and escalated since then into a multi-trillion dollar trade conflict. Trump and his economic advisors have maintained that the US can “win” its trade war with Beijing.