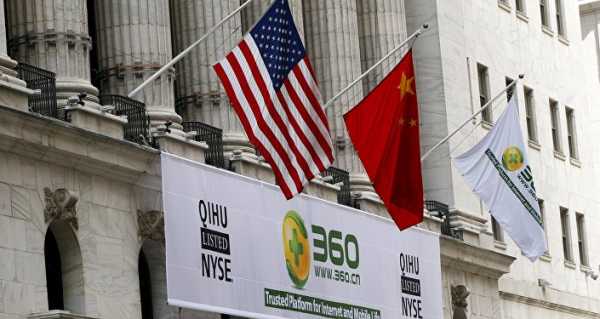 Chinese companies began a careful foray into the US stock market in the early 2000s, tantalised by the prospects of picking easy cash from American investors eager to invest in the world’s new economic powerhouse.

Two loopholes which have enabled Chinese companies to thrive on Wall Street may soon be closed, threatening to deprive US markets of much of the $2+ trillion in market capitalisation accrued by the nearly 250 Chinese firms listed on US exchanges, Business Insider reports.

Chinese media giant Sina Corp became the first to experiment with VIEs, establishing one in 2000 to allow it to be listed on the Nasdaq. PRC regulators initially threatened to crack down on the company over the manoeuvre, but reportedly reneged after realising the possibilities that VIEs opened to Chinese firms looking to obtain foreign capital and the corporate prestige that came with being listed on US exchanges.

General view of downtown Shanghai on a hazy night January 25, 2015

In the two decades since, VIEs have became a major market force, and have been used by Chinese companies not only in the US, but across the globe. Late last year, an analysis by the South China Morning Post found that VIEs accounted for some $4 trillion in capitalisation on the MSCI China Index. $700 billion of that was investment from US-based investors.

Earlier this month, Bloomberg reported that the China Securities Regulatory Commission was working on regulations to close the VIE loophole, with the new rules reportedly expected to allow regulators to stop companies from listing on stock markets abroad even if the entities formally selling the shares are incorporated outside China.

However, analysts watching Chinese markets believe any changes to VIE will be gradual to avoid the potential consequences of a sharp and immediate ban.

“They are not going to immediately say, ‘All VIEs are just illegal and foreigners don’t actually own anything,’” Anne Stevenson-Yang, research director at J Capital Research, told Business Insider.

Chinese President Xi Jinping applauds above a giant portrait of late Chinese chairman Mao Zedong at the event marking the 100th founding anniversary of the Communist Party of China, on Tiananmen Square in Beijing, China 1 July 2021.

Candle Burning at Both Ends

Beijing does not allow the US Public Company Accounting Oversight Board (PCAOB), a congressionally-mandated nonprofit corporation tasked with protecting investors, to inspect the audits of Chinese  companies listed on Wall Street, citing national security grounds.

The new rules come following last year’s passage of the Holding Foreign Companies Accountable Act, which requires companies publicly listed on US exchanges to declare that they are not owned or controlled by any foreign government, and to allow themselves to be audited by the PCAOB or risk removal from the market.

In the short term, new restrictions by both economic giants’ governments are likely to cause or contribute to market instability. Long term, the measures would add to bitter, years-long breakup in the decades-old special political and economic relationship between the US and China. That relationship began in the 1970s under Richard Nixon and Mao Zedong, and started to come crashing down in 2018 through the tech and trade war launched by Donald Trump and continued by the Biden administration.