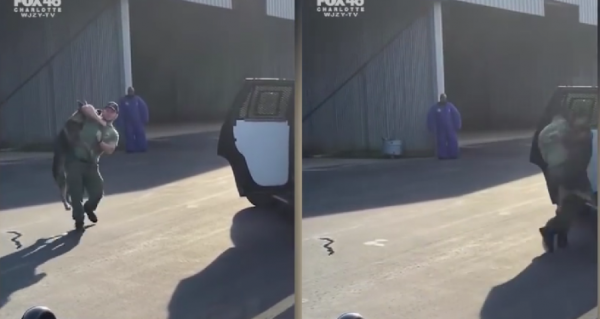 Last month, a video went viral showing an October 2020 incident in which a Salisbury Police Department (SPD) officer was observed choking and hitting a K-9 during training practice. While announcing an investigation into the viral footage, the SPD argued K-9 “training tactics and corrective measures can sometimes be alarming out of context.”

The SPD announced in a Friday news memo that its extensive, third-party investigation concluded that SPD Officer James Hampton engaged in “inappropriate discipline of Zuul,” the K-9, and violated department policy by exhibiting behavior “inconsistent with his K-9 training.”

“As a result, he was recommended for termination,” the memo read.

“The Police Department did not incentivize or otherwise request Officer Hampton’s resignation, which he tendered as a matter of right,” the SPD claimed, also noting it will continue to make changes to its K-9 training operations, policies and procedures.

“We’re good, no witnesses,” someone is overheard saying as Hampton continues to dangle Zuul by his collar. Another person is heard chuckling in the background.

“Is your camera on?” asks someone, after the officer punches Zuul and commands him to sit.

Be advised, the footage below contains scenes some may find disturbing.

“Can you go flip my cameras off? Just the front camera,” an officer asks.

In addition to negative backlash from the public, People for the Ethical Treatment of Animals (PETA) President Ingrid Newkirk also got involved in the matter, penning an op-ed in the Salisbury Post on March 24 calling for humane K-9 training – as opposed to domination-based training.

“A dog who is yelled at — let alone hit — is demoralized and starts to distrust human interactions,” she wrote. “Today, we know, or should know, that dogs like humans break down mentally if they are bullied.”