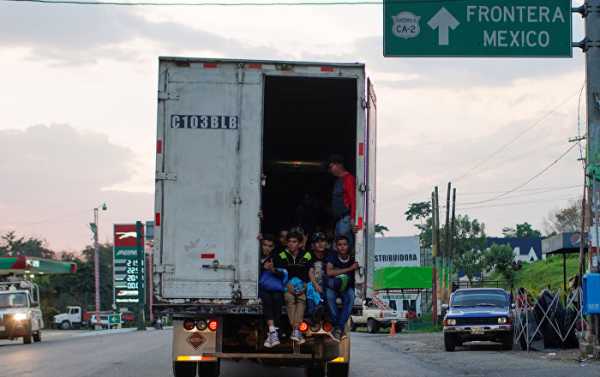 In the 2016 presidential election, Donald Trump campaigned on a promise to adopt tough measures to tackle illegal immigration, which he insists is linked to drug dealing, human trafficking and other crimes. He stands by his push for a border wall with Mexico, but Democratic lawmakers have so far refused to meet his demands for funding.

US President Donald Trump has made more claims of his nation suffering from undocumented immigrants. He took to Twitter to note that illegal immigration has cost the United States just shy of $19 billion so far this year.

He went on to claim that the number of “illegal aliens” staying in the country is as high as 25.7 million. This by far exceeds estimates by the Department of Homeland Security, which reported an approximate 12 million illegal immigrants in 2015, the most up-to-date data available.

While the POTUS did not reveal where he got his numbers from, his statement was in line with his previous remarks.

“Illegal immigration costs the United States more than 200 billion dollars a year,” he tweeted last month. “How was this allowed to happen?”

Earlier in December, he claimed the US was losing $250 billion a year “not including the terrible drug flow” — something that many experts on migration consider to be an exaggerated figure.

One of Trump’s key campaign promises was to go tough on illegal immigration. His hard-line stance, however, has been challenged by the Democrats, who repelled his push for $5.7 billion in funding for a border wall. This led to a lapse in federal spending and a month-long shutdown of a quarter of government agencies, which was temporarily ended as late as this Friday.

Analysts have argued that the shutdown cost the government much more than the wall itself. According to estimates by Standard & Poor’s Chief US Economist Beth Ann Bovino, for example, each week of the shutdown cost the federal budget approximately $1.2 billion in direct and indirect damage.