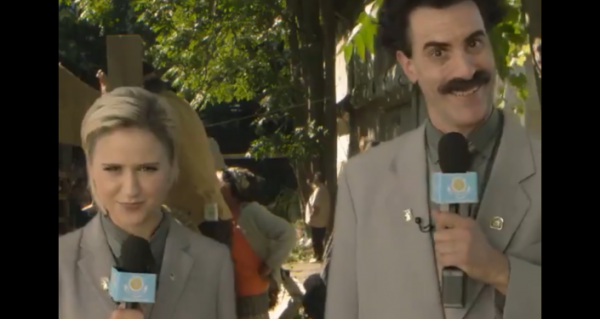 Sacha Baron Cohen, whose roster of fictional characters includes Borat, Ali G, and Bruno, is well known for dressing up as various characters in order to hoodwink celebrities and political elites into making embarrassing comments in front of rolling cameras. And as Trump made clear to reporters, he is no stranger to Mr Cohen’s trickery.

President Donald Trump has slammed comedian Sacha Baron Cohen as a “creep” following the release of the new Borat movie, which sees individuals close to the White House portrayed in a rather embarrassing light.

Aboard Air Force One on Friday, a clearly agitated Donald Trump told reporters of Mr Cohen, “I don’t find him funny. To me, he’s a creep.”

In the new Borat mockumentary, titled Borat Subsequent Moviefilm: Delivery of Prodigious Bride to American Regime for Make Benefit Once Glorious Nation of Kazakhstan, the fictional Kazakh journalist brings his daughter played by 24-year-old Bulgarian Mara Bakalova, to the US to meet with Trump administration officials.

In one scene that has been the subject of much critical attention, Trump’s lawyer Rudy Giuliani, goes to a hotel room with Bakalova, in which he is filmed laying on the bed and touching himself in an apparently sexually suggestive way. He also asks for Bakalova’s number and home address before Borat bursts into the room, causing Mr Giuliani to flee.

In his defence, Mr Giuliani claimed that the Borat footage is “a complete fabrication” and claimed that his hand was not down the front of his trousers in any compromising way, but that he was only tucking in his shirt.

On Air Force One, Mr Trump reminded reporters of his own encounter in 2003 with Mr Cohen, who at the time was playing his well-known character, Ali G. Trump walked off the scene after just 60 seconds of the interview.

“You know, years ago, he tried to scam me,” Trump said.

“And I was the only one that said: ‘No way. This guy is a phoney guy…I don’t know anything about him other than he tried to scam me.’”

In another scene of the film, Bakalova, who is supposed to be playing Borat’s 15-year-old daughter Tutar Sagdiyev, comes within feet of President Trump in what was said to be a room in the White House, and shakes hands with his son, Donald Trump Junior.

Earlier on Friday, Baron Cohen also Tweeted footage which shows that Bakalova managed to gain admission to the White House grounds in late September, seemingly only feet away from the Oval Office.

The character Borat then mockingly Tweeted out, “Trump very careful who he let into his events and house. No Covid test necessary – High 5!”