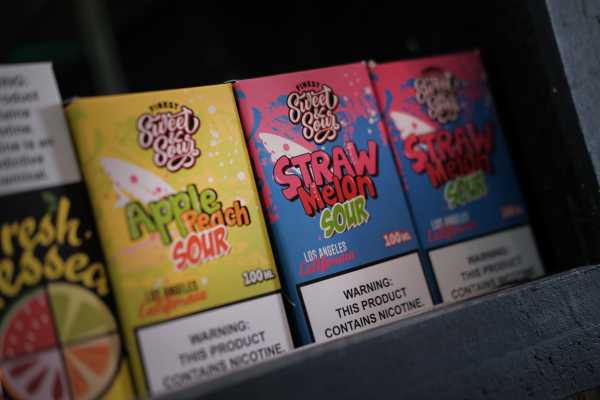 Vaping was introduced into the US market as a tool for helping adult smokers quit. But that’s not who has been buying e-cigarettes in mass.

The latest survey data on adolescent substance use, published Wednesday in the New England Journal of Medicine, shows another year-on-year surge in nicotine e-cigarette use among teens.

According to the survey findings, which were released early this year, one in four 12th graders reported using nicotine e-cigarettes in the past 30 days. Among 10th graders, that rate is one in five, and among 8th graders, it’s one in 11. Even greater numbers of kids reported vaping in the past year.

These figures, from the National Institutes of Health Monitoring the Future survey, represent “significant increases” in each of the three grade levels tracked between 2018 to 2019, the researchers wrote.

And last year’s survey findings were already pretty staggering. Between 2017 to 2018, the researchers found, the number of high school seniors who say they vaped nicotine in the past 30 days doubled — from 11 percent to nearly 21 percent. That was the largest increase ever recorded in any substance in the survey’s 43-year history. It was also the same year Juul, a device designed to deliver a mega dose of nicotine, that was marketed at youth, took over the greatest share of the US e-cigarette market.

It’s led to this: At a time when smoking cigarettes was on its way out in youth, adolescents as young as 13 have picked up a new nicotine device — the long-term health effects of which remain a mystery.

Meanwhile, another newly published study, in JAMA, shows e-cigarette use is staying stable or even declining in adults. Again, that’s the group that was supposedly the intended targets for e-cigarettes. Just 2 percent of adults ages 45 to 64 reported using e-cigarettes in 2018, according to the study. The number is even lower — 1 percent — for adults 65 and older.

The new youth survey data was released amid a vaping-related respiratory illness outbreak that’s killed seven people across the country and sickened at least 380 in 36 states and the US Virgin Islands since April.

Health officials don’t know exactly what’s causing the illness, but they do know all patients reported using e-cigarette products, and many had vaped THC-containing products and/or nicotine-containing liquids.

Another fact is also clear: The outbreak is mostly affecting young people. The majority of patients are in their late teens and 20s with no underlying health issues, the CDC said.

The outbreak, together with the youth survey data, prompted White House to announce that it’s planning to ban flavored e-cigarettes in the coming months. There’s ample evidence that flavors are among the top draws to vaping for adolescents. And that’s why states across the country are also cracking down. They hope by banning flavored vapor, the products won’t be as attractive to young people.

Michigan became the first state to approve a ban on e-cigarette flavors, but it hasn’t yet enacted the new law. Over a week later, New York pushed ahead and enacted a similar ban. Massachusetts and California are eyeing similar measures, according to the New York Times. And influential public health advocates, including Mike Bloomberg, have come out in favor of banning flavors as a way to curb the youth vaping epidemic.

But even before the appearance of the mystery illness, researchers have been finding that vaping — while less dangerous than smoking — certainly isn’t risk-free. Though it’s long-term health effects remain unknown, it’s already been been tied to seizures, an increased risk in wheezing, and potential cardiovascular toxicity.

Recent studies have also shown that puffing on e-cigarettes increases concentration of these microscopic pollutants — in particular, PM2.5 and ultra-fine particles — in indoor environments. Researchers don’t yet know what risks e-cigarette aerosol particles carry, but these tiny particles have been studied extensively in the context of air pollution and tobacco smoking. In those studies, exposure to small particles has been linked with a range of bad cardiovascular outcomes, including heart attacks, high blood pressure, and coronary artery disease.

Subscribe on Apple Podcasts, Spotify, Overcast, or wherever you listen to podcasts.