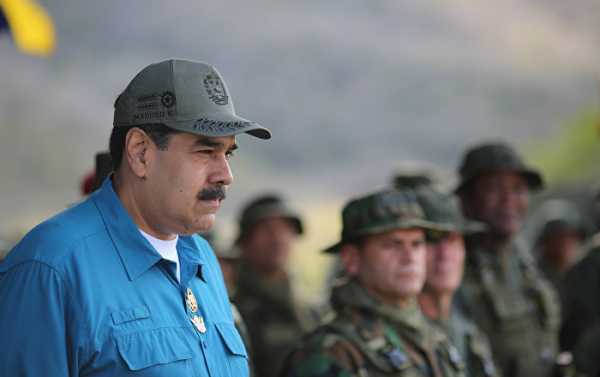 Venezuelan President Nicolas Maduro accused the United States of trying to “fabricate a crisis” to start a war in South America in his first interview with an American broadcaster in years.

“Everything that the United States government has done has been doomed to failure […] They are trying to fabricate a crisis to justify political escalation and military intervention in Venezuela to bring a war to South America”, Maduro told ABC News in an interview made in Caracas.

Maduro also slammed the recent Lima Group meeting in Bogota as “part of that politics to attempt to establish a parallel government in Venezuela”, stressing that the US “wants Venezuela’s oil” and is “willing to go to war for that oil”.

The Venezuelan president also told ABC News that US President Donald Trump needs to fix his policy over Venezuela.

“Venezuela has the right to peace, Venezuela has legitimate institutions. I, as President of Venezuela, am prepared for a direct dialogue with your government and with you to look for, like the Americans that we are. We are South Americans, you are North Americans. To look for 21st century solutions not Cold War solutions. The Cold War should stay behind”, Maduro said in an interview with ABC News.

Last month, Maduro accused Washington of trying to orchestrate a coup after US-backed Venezuelan opposition leader Juan Guaido declared himself interim president. Russia, China, Cuba, Bolivia and a number of other states reaffirmed their support for constitutionally elected Maduro as Venezuela’s only legitimate president after the United States and several allies recognized Guaido.

The United States has imposed numerous rounds of sanctions on Venezuela. In January, Washington blocked around $7 billion in assets belonging to Venezuela’s state oil firm PDVSA. Venezuelan President Nicolas Maduro said that the restrictions were tantamount to illegal seizing. Earlier on Monday, the US Treasury Department sanctioned four Venezuelan governors.

The US Department of State said earlier in a separate statement that the designated governors “prevented desperately needed international humanitarian assistance from entering Venezuela and/or engaged in corruption to the detriment of the Venezuelan people, in some cases involving human rights violations”.

On Saturday, attempts to bring in unauthorized aid into Venezuela led to clashes between Venezuelan police officers, who tried to prevent aid-filled trucks from crossing the country’s border without permission, and protesters. Venezuelan President Nicolas Maduro has refused to allow any US-sponsored aid into the country, calling it a “fake show” and accusing Washington of trying to use it as a ploy to oust him from power.

Venezuelan Vice President Delcy Rodriguez has dismissed allegations about a humanitarian crisis in the country and recalled that international law provides for deliveries of foreign humanitarian aid only in cases of natural disasters and armed conflicts. Caracas has also warned that the illegal entrance of any vehicle into Venezuelan territory would be considered an offense by the country’s military officers.

Meanwhile, US Vice President Mike Pence has said that Washington would announce another set of sanctions against Venezuela’s government in coming days.