Pursuing political correctness at the expense of realpolitik, he says, is a recipe for decline. 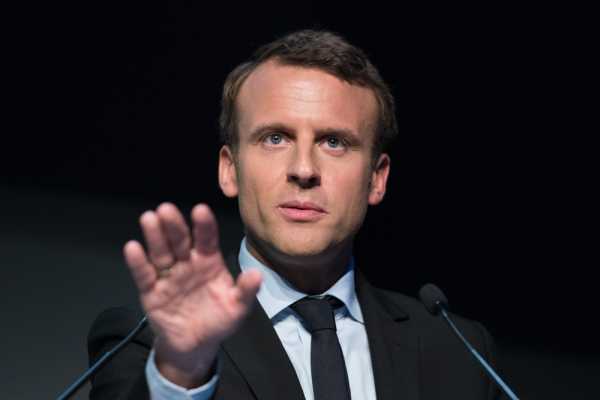 
On the edge of a precipice’: Macron’s stark warning to Europe.” That was the headline on the cover of the latest issue of The Economist.

French president Emmanuel Macron told the magazine, “If we don’t wake up…there’s a considerable risk that in the long run we will disappear geopolitically.” The “we,” in this case, is Europe. In other words, if Europe wishes to play the role of a great power, it will have to be a great power, complete with military mojo.

The magazine summarized Macron: “The underlying message is brutal.” That is, Europe’s current path—pursuing prosperity and political correctness at the expense of realpolitik—must change.

As with so many things these days, the action-forcing change-agent is Donald Trump. In Macron’s words, “We find ourselves for the first time with an American president who doesn’t share our idea of the European project.” To put that another way, with apologies to Ben Franklin, Macron is saying that if the European countries don’t hang together, they will each hang separately.

Of course, to quibble with Macron, it must be said that for most of U.S. history, American presidents were little interested in European affairs. That disengagement changed, of course, with Woodrow Wilson, but continuous American focus on Europe began only in the 1940s.

In fact, the continuation of pre-1989 policy, post-1989, has had three detrimental effects. First, it was costly for the U.S.; second, since America’s military burden was Western Europe’s non-burden, the Europeans enjoyed a “free lunch” that encouraged their daydreaming focus on utopianism; and third, it antagonized Russia, especially as the imperative of bureaucracy-creep pushed NATO eastward.

Trump, in his inimitable way, has been the first post-Cold War president to truly understand that this is the post-Cold War era, and to think accordingly. Indeed, since he is disdainful of the accreted pieties of policy, he is free to wonder whether old allies have become liabilities, and whether old enemies might yet become new partners.

It’s in that fresh spirit that Trump has raised the issue of higher “burden sharing” payments from NATO members. In 2017, he reportedly handed German chancellor Angela Merkel an “invoice” for nearly $400 billion. (Across the world in Asia, meanwhile, recent reports indicate that he seeks higher payments from the rich dependencies of Japan and South Korea.) So we can see: for three years now, Trump has injected a hard-nosed quid pro quo way of thinking into U.S. policy.

And as an impeachment-related aside, we might add that Trump’s transactional thinking overlaps with the Tea Party ideology of many Republicans, starting with acting White House chief of staff Mick Mulvaney. Together, Trumpists and Tea Partiers are deeply skeptical of foreign aid. So the hiccup in arms shipments to Ukraine ought to be seen at least partially through this prism: the Trump administration simply doesn’t like foreign aid. And that sentiment, of course, is far more loathsome to the Washington establishment than any detail about a phone call to Kyiv.

Okay, so back to Macron. He has made a great effort to connect with Trump, thus far having more of a relationship with him than almost any other foreign leader. Yet it’s also clear that Macron thinks that the current trend of trans-Atlantic distancing will continue past the 45th president. That is, the 46th president will likely carry on, even if more artfully, this geopolitical de-coupling. After all, the U.S. has much bigger concerns in Asia, and there’s the looming reality that the country next door, Mexico, is at risk of becoming a failed state.

So if Europe is to be on its own, Macron is right to believe that it needs to get serious about its military might. This is not an argument for recklessness: one can respect—even admire—France’s decision, 16 years ago, to stay out of the Iraq war. We can also recall, with the exception of a certain British prime-ministerial poodle, that other European countries wisely kept their contributions to token (if still tragic) levels.

Yet the prudent must always be puissant. By contrast, fey dream-talk about being a “humanitarian superpower” might play well in Berlin—but the real world operates by sterner rules. Rich and high-minded territories that can’t defend themselves have a way of being swallowed up by tougher customers; that’s been the fate, for example, of such opulent enclaves as Vatican City, Goa, Hong Kong, and Macau. And so today, rich little Singapore should be thinking a lot about how to become a high-tech, high-powered garrison state, such as Israel.

Europe, boasting a population of half a billion and a sixth of the world’s GDP, might seem safe enough. Yet its difficulty in providing for even the basics of frontier defense is a sign of lassitude—and perhaps even a prefiguration of doom.

Still, as this author has noted in the past, France didn’t come all this way these past 1,500 years so it could climb up some ivory tower and evanesce into the atmosphere. The iron spirit of Charlemagne still abides in Gallic heads, and in Macron, one hears the realpolitique echoes of Richelieu, Talleyrand, and DeGaulle.

It must be said all the same that Macron is the leader of France, not Europe. Moreover, if Brexit happens, and the European Union shrinks by a member, it will crimp the grand ambitions of both Macron and the EU.

Yet even a Brexited Britain won’t be going anywhere geographically; it will still, by necessity, share Europe’s concerns. Yes, some Brits might think fondly of an Anglosphere as an alternative to the Eurosphere, yet a look at the globe reminds us that the Anglos are spread too far to make consolidation much of a prospect. (Plus, of course, so long as Boris Johnson is at Number 10 and Nigel Farage is lurking about, the Democratic Party in America will block anything that might vindicate them. Indeed, many Democrats would no doubt prefer to join the EU over any Anglosphere.)

So it’s likely that Macron and his confreres will find some way to keep the English in the European orbit; Macron did, after all, just make his pitch to The Economist, a citadel of anti-Brexitism. Remainers, numbering half of the UK’s population, will no doubt continue to agitate for the closest possible relationship with Europe. Moreover, in this chill world, the European countries might yet crowd closer together for warmth.

Meanwhile, Macron will be pushing for a more bottom line-oriented EU, based on the mercantilistic principles outlined three and a half centuries ago by the French minister Jean-Baptiste Colbert. That could mean the repurposing of existing EU policies to achieve more explicitly economic goals. For instance, the EU’s General Data Protection Regulation (GDPR) has been focused on privacy, yet shrewd observers have noted that the GDPR can also be a kind of trade barrier against America’s Silicon Valley. And if GDPR hasn’t done that trick yet, it can be pumped up further, until Europeans, sheltered from the Americans, figure out how to make their own versions of Google, Facebook, and whatever comes next artificial intelligence-wise.

In that same vein, green policies can become even more of an industrial policy than they already are. By this reckoning, Greta Thunberg becomes an unwitting asset, because her Cassandra spiel could force the EU to spend big to figure out how to make some non-carbon energy system succeed. And the French, of course, always happy with nuclear power, would love to sell their reactors to the rest of Europe, and to the world.

Many will say, of course, that such statist policies don’t work, that the free market knows best, even if it’s agnostic about geopolitical power. Such agnosticism is notably popular among writers for The Economist, as the Macron article makes clear.

Of course, the Asian tigers, big and small, have a differing view—they are believers in state leadership. They have all willed themselves into industrial muscle, and at least one of them, China, has gained enormous military power as well.

More to the point, Macron can look back at the Colbertian traditions that helped make his own country great and his continent rich. To be sure, the European Way is not the American Way, but that’s the point: Macron and the Europeans are going to have to find their own path.

James P. Pinkerton is a contributor to the Fox News Channel and a regular panelist on the Fox “News Watch” show, the highest-rated media-critique show on television. He is a former columnist for Newsday, and is the editor of SeriousMedicineStrategy.org. He has written for publications ranging from The Wall Street Journal, The New York Times, The Washington Post, The Los Angeles Times, USA Today, National Review, The New Republic, Foreign Affairs, Fortune, The Huffington Post, and The Jerusalem Post. He is the author of What Comes Next: The End of Big Government–and the New Paradigm Ahead (Hyperion: 1995). He worked in the White House domestic policy offices of Presidents Ronald Reagan and George H.W. Bush and in the 1980, 1984, 1988 and 1992 presidential campaigns. In 2008 he served as a senior adviser to the Mike Huckabee for President Campaign. Married to the former Elizabeth Dial, he is a graduate of Stanford University.

All materials on this site are taken from open sources - have a link back to the material on the Internet or sent by visitors to the site and are provided for informational purposes only. Rights to the materials belong to their owners. Administration of the site is not responsible for the content of the material. If you found materials on our website that violate copyrights belonging to you, your company or organization, please let us know.
Contact us: 1newsda[email protected]