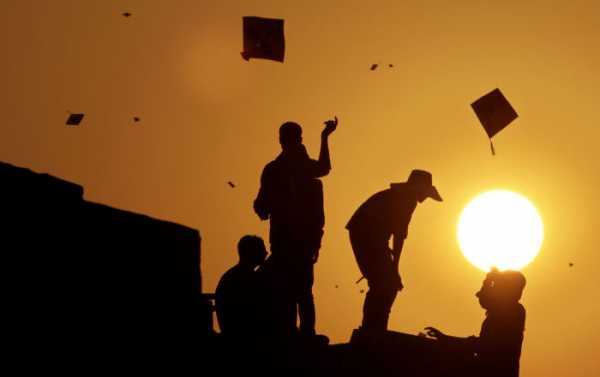 New Delhi (Sputnik): India has a rich culture of traditions and festivals: every year over 30 major festivals marking significant days from diverse religions are observed across the nation.

On Tuesday, Indians woke up to coloured kites soaring in the sky on the occasion of the festival of “Makar Sankaranti” also known as “Uttarayan” – which marks the end of the winter season and welcomes the summer. Hindus offer prayers to Lord Surya, who is symbolised by the Sun.

Known as the Indian version of “Thanksgiving”, Sankaranti is a harvest festival that gathers friends, neighbours and families together to celebrate the day with early morning dips in holy rivers, flying kites, exchanging sweets made of sesame seeds and evenings lit up with bonfires. Legit Kite-flying competitions are organised in neighbourhoods across the country.

Netizens took to Twitter to wish each other a happy Makar Sankaranti with pictures of kites.

​The festivities associated with Sankaranti are known by different names from region to region. The festival is called “Lohri” in North India, “Pedda Pandaga” in the states of Maharashtra, Goa and Andhra Pradesh, “Magh Bihu” in north-eastern state of Assam and “Pongal” in South India.

People from various regions in India dress up in their traditional ethnic attires as part of the festivities.

On Twitter, #MakarSankaranti, #Pongal, #Lohri and #Bihu are also trending in India.

However, as gathered from previous years, hundreds of birds get injured on Uttarayan in India by the glass-shred coated strings called “Manjha” used for flying kites. This year, netizens are urging people to be careful not to hurt birds while enjoying the festivities.