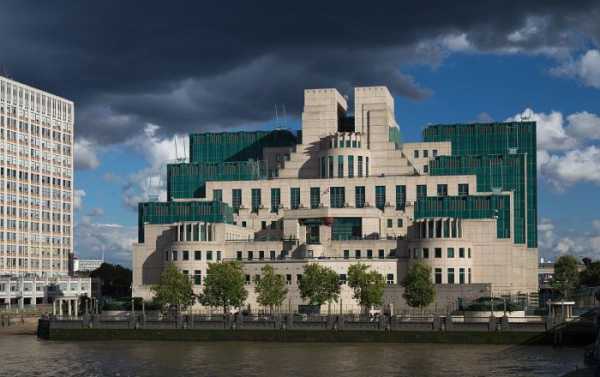 Beijing has been facing increasing pressure to explain how COVID-19 first began to spread late last year in Wuhan, amid attempts by US President Donald Trump to label the novel respiratory disease a “Chinese virus”, and US Secretary of State Mike Pompeo claiming there was “enormous evidence” that the virus was man-made.

Sir Richard Dearlove, former head of the British Secret Intelligence Service (MI6), has said on The Telegraph’s Planet Normal podcast that a scientific report published this week by a Norwegian-British research team suggests the COVID-19 pandemic is the result of the respiratory virus “escaping” a laboratory in China.

An aerial view shows the P4 laboratory (C) at the Wuhan Institute of Virology in Wuhan in China’s central Hubei province on 17 April 2020. – The P4 epidemiological laboratory was built in co-operation with French bio-industrial firm Institut Merieux and the Chinese Academy of Sciences. The facility is among a handful of labs around the world cleared to handle Class 4 pathogens (P4) – dangerous viruses that pose a high risk of person-to-person transmission

According to the “important” new report, cited by Sir Richard Dearlove, 75, clues have been discovered within the genetic sequence of the virus, seeming to suggest that its key elements were man-made, and “inserted”, writes the outlet.

The report cited by the outlet is likely to feed into claims that China should pay “reparations” for the global death toll and economic fallout from the pandemic, as Beijing has been taking efforts from the beginning of the outbreak to “lock down” debates over the origins of the virus, the ex-intelligence chief is quoted as saying.

Suggesting that Chinese scientists were possibly carrying out clandestine gene-splicing experiments on bat coronaviruses when the virus escaped due to biosecurity flaws, Dearlove said:

While stopping short of accusing Beijing of intentionally releasing the virus, in the interview Dearlove does accuse China of subsequently covering up the scale of the epidemic.

According to the new peer-reviewed research entitled “A Reconstructed Historical Aetiology of the SARS-CoV-2 Spike”, spearheaded by Professor Angus Dalgleish of St. George’s Hospital at the University of London and Norwegian virologist Birger Sorensen, the team claim to have identified “inserted sections placed on the SARS-CoV-2 Spike surface” that shed light on how the virus finds its way into human cells, writes The Telegraph.

The report is cited as warning that the SARS-CoV-2 spike differs greatly from any other Sars virus studied previously, and, accordingly, it is doubtful that efforts to develop a vaccine will result in success. The scientists are suggested as believing the true aetiology of the virus has been “misunderstood”, which has spurred them to develop their own vaccine, produced by Immunor AS, a Norwegian pharmaceutical company led by Sorensen.

The analysis offered by Professor Dalgleish and his colleagues, scheduled for release in the coming days, claims the virus possesses “unique fingerprints”, “indicative of purposive manipulation”, thus calling into question the theory that the coronavirus evolved naturally.

The research suggests COVID-19 is a “remarkably well-adapted virus for human co-existence”, and was likely engineered via a Wuhan lab experiment to develop “chimeric viruses of high potency”.

The current report, says the outlet, was earlier rejected by several journals, including Nature and the Journal of Virology, which deemed the research “unsuitable for publication”.

The report had been rewritten a number of times ostensibly to remove accusatory claims about China before being published in the Quarterly Review of Biophysics Discovery, a journal chaired by scientists of Stanford University and the University of Dundee.

A previous version, cited by The Telegraph, suggested the novel respiratory disease should be dubbed the “Wuhan virus”, while claiming to have proven “beyond reasonable doubt that the COVID-19 virus is engineered”.

A chief scientific adviser to the Norwegian military and one of the original co-authors, John Fredrik Moxnes, reportedly asked for his name to be removed from the report.

According to the publication, scientists from the Francis Crick Institute and Imperial College London earlier dismissed the conclusions of the report.

Nevertheless, hailing the new study as “a very important contribution to a debate which is now starting about how the virus evolved and how it got out and broke out as a pandemic”, Richard Dearlove says:

China has been under global pressure to explain the details of how the novel respiratory virus first originated in its city of Wuhan in late 2019.

Last month, the US Secretary of State, Mike Pompeo, claimed there was “enormous evidence” that the coronavirus outbreak originated in a Chinese laboratory, with US President Donald Trump repeatedly pointing the finger of blame for the pandemic at China, and designating COVID-19 the “Chinese virus”.

There is currently near-unanimous consensus among the global international community that the respiratory virus that caused the COVID-19 pandemic first emerged in animals, most likely bats or pangolins, and subsequently jumped to humans.

This Saturday, Feb. 22, 2020, photo released by Xinhua News Agency, shows medical workers in protective suits at a coronavirus detection lab in Wuhan in central China’s Hubei Province. The fresh national figures for the disease that emerged in China in December came as the number of viral infections soared mostly in and around the southeastern city of Daegu, where they were linked to a local church and a hospital.

In a statement made on 30 April, the US National Intelligence Director’s office said it believes the COVID-19 virus that first originated in the Chinese city of Wuhan was not man-made or genetically modified, adding:

Earlier, the World Health Organisation (WHO) said on 21 April that all available evidence point to the fact the coronavirus originated in animals in China late last year and was not man-made in a lab.

The Chinese government has vehemently dismissed all speculations regarding the origins of COVID-19, claiming the outbreak began in a “wet market” in the city of Wuhan late last year.

Earlier this week, Liu Xiaoming, the Chinese ambassador to the UK, said Beijing would welcome an international investigation into the origins of the pandemic, insisting his country had nothing to hide.