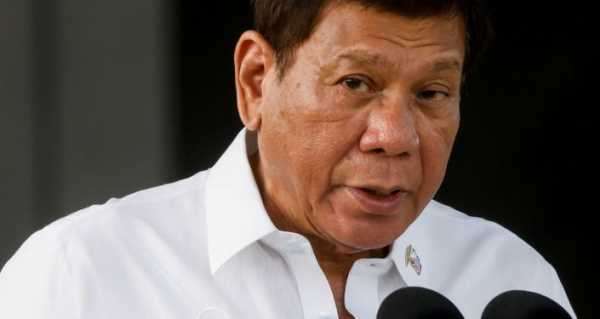 Last month, Rodrigo Duterte underscored the need to strengthen the Philippines’ “own defences” as he instructed the government to consider scrapping the Manila-Washington Visiting Forces Agreement.

President Rodrigo Duterte has pledged to be quick to scrap a Washington-Manila military deal if US nuclear weapons are deployed in the Philippines.

The conference was held after the president attended a ceremony to welcome the arrival of the initial 600,000 doses of Sinovac Biotech’s CoronaVac, delivered by a Chinese military aircraft to Manila earlier in the day.

April 19, 2018 file photo, Philippine President Rodrigo Duterte, right, jokes to photographers as he holds an Israeli-made Galil rifle which was presented to him by former Philippine National Police Chief Director General Ronald “Bato” Dela Rosa at the turnover-of-command ceremony at the Camp Crame in Quezon city northeast of Manila

When asked about the possibility of US nukes being stored in his country, Duterte recalled that the Philippines Constitution prohibits the deployment of nuclear weapons on the Asian nation’s soil.

The statement comes after presidential spokesman Salvador Panelo said in early February that the president had instructed the government to terminate the VFA, saying the time has come “to rely on ourselves”.

The Philippine leader has repeatedly slammed American politicians for criticising his war on drugs and even banned several US lawmakers from entering the country.

He rejected their accusations of human rights violations by Philippine police that allegedly took place during the campaign, stating that his country doesn’t require any interference by the international community.

The VFA, which came into force on 27 May 1999, regulates relations between the US military in the Philippines and Manila. The US has maintained a military presence in the Philippines since the country gained formal independence in 1945 and has permitted US Naval, Air Force, and Army bases to be stationed throughout the islands.