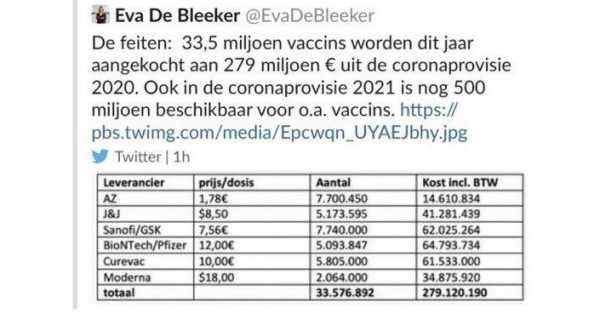 Belgian minister Eva De Bleeker’s list left out the Russian Sputnik V vaccine, which is already on the market and priced competitively with its Western rivals. Joint trials with the cheapest on offer, AstraZeneca’s “Oxford” vaccine, were announced this week.

A Belgian government minister has leaked the prices of various COVID-19 vaccines after revelations the European Union (EU) turned down Pfizer’s offer of 500 million doses over price.

US transnational Pfizer reacted on Friday to State Secretary for Budget and Consumer Protection Eva De Bleeker’s apparently careless tweet on Thursday, saying the price it charges for the vaccine made at its facility in Belgium and co-developed with German foirm BiNTech.

However, she was not quick enough on the delete button to avoid other Twitter users taking screen captures of the revealing chart.

The so-called “Oxford vaccine” developed by Britain’s AstraZeneca comes out cheapest by far, even taking into account that it also requires a two-dose regime. AstraZeneca and Gamaleya announced this week that they were conducting clinical trials into combining the two vaccines, with one as the initial dose and the other as a booster. If successful, the combined treatment would cost just €10 per person vaccinated.

De Bleeker’s careless tweet came after Reuters reported the European Commission would use its option on up to 100 million doses of the Pfizer BioNTech vaccine on top of its existing order of 200 million.

But internal documents obtained by Reuters showed the bloc had turned down an offer of 500 million vaccines in July because the price was too high. Since then the death toll from the pandemic has risen to almost half a million across the EU.

The British National Health Service has already given more than 140,000 jabs of the Pfizer vaccine after the UK became the first country to approve its use.