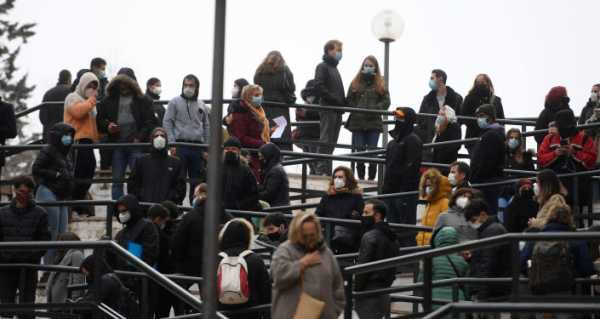 MOSCOW (Sputnik), Valentina Shvartsman – The passing year may be remembered for many things, but the novel coronavirus pandemic — the most devastating global health crisis in recent history — has been by far the most impactful event of 2020.

This previously unknown pathogen has already claimed the lives of more than 1.5 million people, disrupted the livelihoods of millions of others and undermined the global economy, and yet we still have a long path to recovery ahead of us.

These 12 months were so unprecedented that the Oxford English Dictionary could not choose just a single word to describe it and instead published a whole list of them, with many of those that we have heard painfully often in the course of this pandemic: “coronavirus,” “COVID-19,” “face masks,” “lockdown,” “social distancing,” “reopening,” “superspreader” and others.

Sputnik offers a recap of the pandemic — from the moment that it was just a small outbreak of an “unknown pneumonia” in a Chinese city until today when it has become the health emergency at a scale that is unprecedented in nearly a century after the Spanish flu pandemic.

The Emergence of New Pathogen in China

The world first learned about the new virus on December 31, 2019, when health authorities in the Chinese city of Wuhan issued a statement about cases of “viral pneumonia of unknown cause.” It was picked up by the World Health Organization’s (WHO) Office in China, which tweeted about the cluster of pneumonia cases and shared more detailed information with member states in early January.

From there, the situation evolved rapidly.

On January 9, the UN health agency reported that the pneumonia cases were caused by a novel coronavirus. On January 11, WHO said that it received a genetic sequence of the new virus. That same day, Chinese media reported the first death from the disease caused by the virus. In two days, the first case of infection was detected outside of China – in Thailand.

On January 14, WHO held its first press briefing about the novel coronavirus, recognizing the possibility of “limited human-to-human transmission,” but tweeted that Chinese officials had found no evidence of it so far. Between January 20-21, WHO carried out its first mission from Wuhan, saying there was indeed evidence that suggested human-to-human transmission of the novel coronavirus.

Around that time, the first cases of the new disease were reported in Japan and France, and disturbing videos were circulated on social media showing people collapsing in the streets of Wuhan. The health system in the city was soon pushed to the brink, with hospitals overwhelmed and patients and doctors alike falling victims to the new virus. On January 23, local authorities imposed a strict lockdown on Wuhan and other cities in the Hubei providence in an attempt to curtail rising infections.

On February 11, the UN health agency announced that the disease caused by the novel coronavirus would be named COVID-19.

Despite countries restricting or banning travel to China, the cases continued to grow rapidly outside China. By early March, the number of infections surpassed 100,000 globally, while China itself managed to gain control over the disease in affected areas.

On March 11, amid snowballing infections, WHO declared COVID-19 a pandemic — the first one caused by a coronavirus.

In the search for “patient zero,” Chinese officials announced in March that the first person was infected with the novel coronavirus on November 17, 2019. Later, however, evidence emerged of cases in Italy dating back to as early as September 2019.

To date, it is still unclear what the zoonotic origin of the novel coronavirus was, but WHO launched an international mission to identify it. In particular, the team was expected to travel to Wuhan, where the transmission of the virus was first detected.

Globalization and the connectivity of the modern world backed up by the slow action of governments resulted in the virus quickly spreading from one nation to another, even reaching remote areas and war-hit regions.

In March, the world watched in horror as new hotspots of the virus emerged across the globe; as the virus’s victims quickly overwhelmed morgues in northern Italy and a Bergamo newspaper published 10 pages of obituaries; as surging cases and deaths forced the Iranian government to temporarily free thousands of prisoners; as South Korea struggled to contain an exponentially growing cluster of cases in a Christian sect.

The first wave of the pandemic was ruthlessly sweeping through the world. Travel restrictions, increased testing and disease prevention measures, such as wearing masks and handwashing could not effectively suppress the transmission of the virus and cases continued to soar in the Americas, Europe and Asia. Governments rushed to stockpile protective equipment for their frontline workers, and ordinary people rushed to grocery stores, hoarding food, supplies and toilet paper. Health systems were collapsing under the pressure, even in developed countries, exposing inadequate funding and under-preparedness.

In April, when Wuhan lifted its months-long lockdown, it was now the rest of the world’s turn to confine their citizens to their homes. The suspension of international travel, stay-at-home orders and the closure of businesses dealt a huge blow to the global economy, resulting in the worst crash of the stock markets since 1987 and hundreds of millions of lost jobs. World Bank estimates that the global GDP will contract by 5.2 percent in 2020.

Towards the summer, the number of new cases started to decline in different regions, resulting in the relaxation of measures and even reopening of some countries for travel. However, starting in September, new daily cases started to rise again in Europe and other regions, signalling a second wave of infections. Despite being much better prepared this time around, many countries were still forced to tighten health measures and even impose temporary stay-at-home orders to suppress mounting cases.

However, global daily rises in cases are now surpassing the spring peak figures. In late November, the global tally of coronavirus cases surpassed 60 million cases – it took only 17 days to go from 50 to 60 million.

As Christmas and New Year approach, new infections are continuing to pick up globally, and governments around the world are struggling to strike a delicate balance between allowing citizens to celebrate the upcoming holidays and preventing further spikes in cases.

A Glimpse of Hope in Race for Cure

At the onset of the virus outbreak, there was no known treatment for the disease apart from oxygenation and ventilation, no sufficient diagnostic tools to ensure adequate testing and no vaccine to prevent the virus from spreading.

Now, ten months into the pandemic, we have multiple test systems, including rapid antigen testing that offers results in 15 minutes. We know that convalescent plasma and a steroid called dexamethasone can save the lives of critically ill patients, while studies of another innovative treatment with monoclonal antibodies continue. And it seems as if we are now about to have vaccines too, as four candidates have shown an efficacy of over 90 percent in late-stage clinical trials.

Two are adenoviral vaccines, one developed by Oxford University and British pharmaceutical giant AstraZeneca, and another – by Russia’s Gamaleya Institute. Two others were developed by US pharmaceutical companies Moderna and Pfizer and use a new emerging mRNA platform.

Additionally, China alone has five vaccines in late-stage phase III trials, and the total number of vaccines in different stages of clinical evaluation exceeds 50 globally, according to the WHO landscape of candidate vaccines.

The United Kingdom, The United States and Russia have begun vaccination, prioritizing health workers and the vulnerable population.

But health experts warn against rosy optimism. First of all, even though manufacturers are working around the clock to increase their capacities, the production and distribution of vaccines will take a long time.

“In spite of all of this work [by manufacturers], certainly in the short term, in 2021, the vaccines will be in limited supply. We know that,” Dr. Kate O’Brien, the director of WHO’s Department of Immunization, Vaccines and Biologicals, said in mid-November.

Additionally, there are still too many questions to be answered about the leading vaccine candidate, as clinical trials continue.

“Firstly, does the vaccine protect from a severe infection and a fatal infection? Preventing cough or fever is not crucial now. Secondly, will vaccinated subjects have the capacity to infect others? If the vaccine only converts a moderately symptomatic into an asymptomatic spreader, the benefit in a disease such as COVID-19 will not be sufficient. This is key to fight against the spread of the pandemic,” Professor Santiago Mas-Coma, the president of the World Federation for Tropical Medicine and an expert member of the World Health Organization, said in late November.

World Urged to Brace for Next Pandemics

Some observers have mistakenly described the COVID-19 pandemic as a black swan event, as something completely unexpected. However, the world was warned about the possibility of such a pandemic multiple times but chose to ignore it.

There is a high probability that new deadly pathogens will continue to emerge and cross the species barrier from animal to human. WHO and other health experts are now warning governments against stopping at just vaccination and forgetting the lessons painstakingly learned by this pandemic. As the world recovers from this crisis, it is crucial to invest in healthcare systems, the training of frontline workers and pandemic preparedness.