From Iran to Egypt, the Middle East is on fire and for once the U.S. has nothing to do with it. Let’s keep it that way. 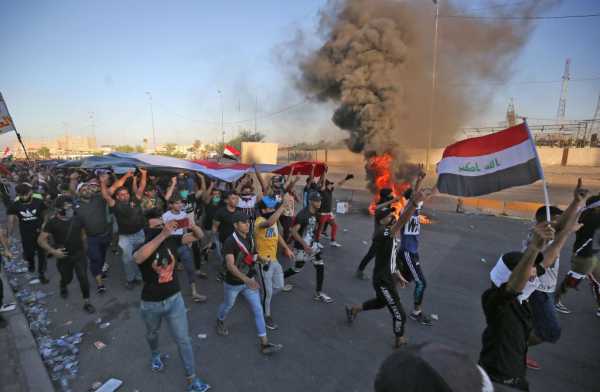 The Middle East is erupting again, as angry youths lead demonstrations in Egypt, Lebanon, Iraq, and Iran. In fact, protests reach much further: Hong Kong and Chile have been similarly convulsed. If nothing else, political elites around the world are sleeping a little less soundly.

In 2011, popular discontent swept the Arab world, but only Tunisia looks remotely successful. Syria and Libya were convulsed by devastating civil wars. Egypt ended up ruled by an even more brutal despot. Bahrain’s Sunni royal family relied on the Saudi military to ensure the subservience of the Shia majority. The other Gulf kingdoms bought political peace, increasing welfare payments to their largely dependent populations. No country in the region looks particularly stable.

The most striking though least noted demonstrations may be those in Egypt. In September, several thousand people took to the streets in Cairo and a half dozen other cities demanding the ouster of President Abdel Fattah al-Sisi. The regime arrested some 4,300 protesters. About them, the Trump administration said nothing, since President Donald Trump likes the brutal new pharaoh.

Sisi has jailed and tortured more people than his predecessor and closed down NGOs that monitored Cairo’s human rights abuses. Yet despite the near-certainty that they’d face extended prison terms, demonstrators turned out against his regime. Their courage demonstrated his fragility. People are angry over the continued lack of economic growth and jobs. Corruption rages unabated: Sisi represents the statist commercial class, dependent on government favors. Moreover, he has reinforced the armed services’ extensive control over the economy, which has turned soldiers into a privileged class. He no longer makes any pretense of political liberalization, having crushed all activism, and not only that of the Muslim Brotherhood.

In the short term, he is unlikely to be ousted. However, his long-term survival is less certain, since he is widely hated and seen as vulnerable. Even the military has put distance between it and the president; he had to arrest and intimidate officers to prevent them from running against him. His supposed friends might prove to be his most dangerous foes.

Lebanon’s demonstrators, who started by opposing new taxes, are challenging the region’s most convoluted and perhaps least efficient political system. The only Middle Eastern nation with a generally Christian culture, Lebanon has constructed a bizarrely sectarian government. The president is a Maronite Christian, the prime minister is a Sunni, and the parliamentary leader is a Shia. Religion has become as much a matter of politics as of faith. During the 15-year civil war, alliances madly twisted and shifted. Recently, the presidency remained open for nearly two years as a onetime Christian warlord backed by Hezbollah battled a onetime Christian warlord backed by the Sunnis. Eventually the former triumphed.

In such a system, competence and efficiency matter little. When I visited Lebanon in 2015, the country was in the midst of a trash crisis. Sectarian politics had blocked landfill use, causing garbage to pile up all over Beirut and beyond. Irregular electrical power has been an issue of late. The country is overwhelmed with refugees. Good jobs are few, and Lebanon’s young go abroad in search of work.

Hundreds of thousands of people from across the country’s many divides turned out, chanting “all of them means all of them” should resign and “we are the popular revolution, you are the civil war.” Shia demonstrators even targeted Hezbollah, angry over its involvement in the Syrian conflict, support for the government, and complicity in corruption. The government offered concessions and the prime minister and several other cabinet members resigned. Still the crisis rages.

However, the interests that benefit from the current corrupt system remain strong. That includes outsiders, particularly Iran and Syria. Before its civil war, Lebanon was a liberal oasis and commercial safe zone. However, that conflict, which killed hundreds of thousands, continues to hang like a specter. Sectarianism makes some Lebanese reluctant to attack “their” representatives. The protesters seek to overcome such divisions, but the population remains small, divided, and threatened.

Washington’s greatest recent policy failure was the invasion of Iraq. The expected cakewalk turned into a bloody sectarian civil war. Hundreds of thousands died. Al-Qaeda in Iraq and the Islamic State were created. Iran was empowered. The U.S. enabled sectarian Shia rule, which inflamed a vicious Sunni insurgency and encouraged the disempowered minority to rely on radical groups such as ISIS for protection.

Earlier popular protests in Iraq had illustrated the significant gulf between the public and the elites. Now, economic problems have triggered another round. Government incompetence and corruption have led to poor, even non-existent public services, such as clean water and reliable electricity. Sectarian control of ministries has turned them into sources of religious influence and employment. As elsewhere in the Mideast, jobs for the young are scarce.

Finally, the reassignment, meaning demotion, of a popular counter-terrorism official who challenged Iranian-backed militias further intensified the protests. The largely Shia protesters criticized sectarian governance and outside influence over Baghdad. Indeed, an Iranian consulate in the south was attacked. However, the antagonism is broader than that.

The Trump administration is pleased that Tehran is a target, but demonstrators are angry with Washington as well. Reports independent analyst Ahmed Twau, the “protests are against any foreign interventionism in Iraq, be it Iranian, American, or Saudi.” Growing Iraqi nationalism is no friend of the U.S. Some protesters have been chanting “No America, no Iran.” Iraqi commentator Bassil al-Qazmi complained that when the U.S. invaded, it “thought Iraqi politicians would only follow and be loyal to Washington.” When the moderate Shiite cleric Ayatollah Ali al-Sistani warned against the demonstrations “becoming an arena for score settling between some international and regional countries,” he meant both the America and Iran.

Moreover, the most important political exponent of Iraqi nationalism is the radical Islamic cleric Muqtada al-Sadr, whose bloc received the most votes in the last election and whose militias targeted U.S. forces during the occupation. In May, Sadr organized demonstrations urging the government to stay out of any U.S.-Iran conflict. If Prime Minister Adel Abdul-Mahdi falls, his successor, whatever his attitude towards Tehran, is unlikely to be Washington’s friend. Jeffrey Martini and Ariane Tabatabai of the Rand Corporation warn that the revival of “Iraqi nationalism leaves the United States’ ability to operate in that country just as exposed as the protests leave Iran’s presence.”

Of course, thoroughgoing reform is desperately needed. Nevertheless, the protesters face an uphill struggle. The Abdul-Mahdi government has responded with force; the pro-Iran parliamentary bloc remains his strongest supporter and Iranian-backed militias buttressed the security forces. After initially denigrating the protesters and demanding that the demonstrations cease, Abdul-Mahdi acknowledged their legitimacy and offered to quit—once a successor is agreed upon, which might prove impossible, as he well knows. Nor is it clear that the demonstrators represent a majority. After all, the voting public chose the MPs who approved the current government.

The most recent round of demonstrations in Iran, which have hit 100 cities, were set off by gas price hikes. The Trump administration believes sanctions have succeeded in creating enormous economic hardship, which will be blamed on Tehran. However, while the protesters are angry with Iran’s rulers, that does not mean that they share the Trump administration’s perspective. The share of the population that supports negotiating with the West over its nuclear program has fallen as U.S. sanctions have expanded. Apparently, the administration claiming to stand with the people while it impoverishes and starves them has proven less than persuasive.

The regime obviously feels threatened; hence the internet shutdown to thwart opposition coordination. However, so far the protests have been smaller than those of two years ago. Anyway, despite Washington’s triumphalism, the belief that a collapse would yield a liberal, democratic system reflects the triumph of hope over experience. Protesters who circulated an open letter denouncing “the Iranian sectarian regime that backs all the corrupt politicians, criminals and murderers in our corrupt government” would not necessarily view a secular Western regime as the best alternative. Nor would the more traditional rural population.

So far, the protests remain mere precursors for future transformations. Indeed, urban unrest, though important evidence of dissatisfaction, may be a misleading indicator of popular sentiments. The West tends to pay disproportionate attention to the opinions of English-speaking, liberal-minded city-dwellers. But they aren’t the only people in Iran. The rural population is more traditional, religious, and conservative. Moreover, it matters who is taking to the streets. Despite the latest disruptive unrest, the Mideast still looks far from a democratic revival.

We see through the glass darkly, observed the Apostle Paul. The Middle East again is proving to be perennially unstable, even without a new blundering American intervention. Hopefully popular aspirations for democracy and prosperity will have a better end this round. However, no one should have any illusions about the likelihood that nationalistic Arab sentiments will coincide with pro-American and especially pro-administration sentiments. Washington should be careful what it wishes for: new, democratic, nationalistic regimes might be less willing to tolerate future U.S. meddling.

Doug Bandow is a senior fellow at the Cato Institute and a former special assistant to President Ronald Reagan. He is the author of Foreign Follies: America’s New Global Empire.