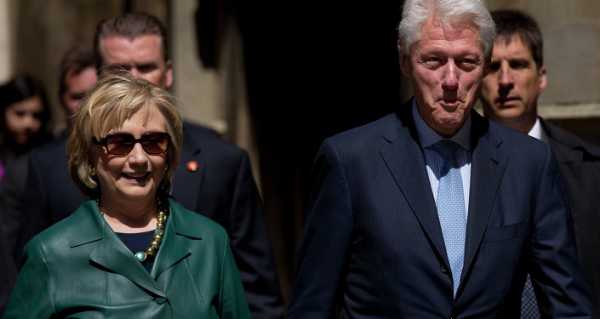 Although the DoJ and FBI are actively chasing Donald Trump’s supporters, they have never demonstrated a similar hardball approach when it came to the Clintons and other establishment politicians, says Wall Street analyst Charles Ortel, who has investigated the Clinton Foundation’s alleged fraud for several years.

On 20 July, Thomas J. Barrack, a billionaire businessman and longtime friend to former president Donald Trump, was arrested in Los Angeles being charged with illegal lobbying for the United Arab Emirates (UAE) between April 2016 and April 2018. The indictment also charged Barrack with “obstruction of justice and making multiple false statements during a 20 June 2019 interview with federal law enforcement agents.” The businessman pleaded not guilty on 26 July.

Barrack is the second Trump ally to be arrested this month. Previously, the Trump Organisation and CFO Allen Weisselberg were charged with 15 counts relating to an alleged tax fraud scheme on 1 July. Like Barrack, Weisselberg pleaded not guilty.

The recent arrests show that the anti-Trump “resistance” campaign launched in 2015 never ended, according to Charles Ortel, a Wall Street analyst and investigative journalist. The DoJ and FBI were quick to indict and detain many of the former president’s loyalists; however, when it came to prominent establishment figures, like the Clintons or their associates, the US justice machine appeared to be completely out of whack, he believes.

Ortel, who has been investigating the Clinton Foundation’s alleged fraud for several years, presumes that Trump and his allies “pose existential threats to globalists who are pulling strings at crooked foundations” as Team Trump may, potentially, return to the helm of the country and strip the establishment of many powers.

US President Bill Clinton (L) and presidential advisor Ira Magaziner (R) greet guests during an electronic commerce event 01 July at the White House in Washington, DC on July 1, 1997. Clinton hosted the event which promotes commerce on an international scale using the internet

The Wall Street analyst referred to an episode involving the Clinton Foundation, which remains largely unnoticed in the media and was reported by Australian investigative journalist Michael Smith in November 2016. In his op-ed, Smith referred to an email sent by Erskine Bowles, an American businessman who served as Bill Clinton’s chief of staff, to his former boss on 17 February 2015. The email discusses documents related to the Clinton Health Access Initiative (CHAI) and allegedly “lost” $23 million of restricted grants.

According to Smith, the “CHAI overspending” rings alarm bells: he wonders how the non-profit and tax-exempt organisation “lost” $23 million of restricted grant money so that it had to be “bailed out.” The Australian journalist did not rule out that the aforementioned funds were “misused.”

The investigative reporter forwarded his detailed concerns about the Clinton Foundation and CHAI financial management issues to the FBI and to Australian authorities, but, apparently, to no avail at that time.

The Clinton foundation has been mired in controversy since its inception; however, it has never been caught red-handed by the FBI or DOJ, according to Ortel.

First and foremost, “the William J. Clinton Presidential Foundation never legitimately secured authority to expand the scope of its geographic focus beyond a small park in Little Rock, Arkansas – the legal entity was formed solely to house records created or received during the Clinton presidency, and to allow scholars and other visitors to study these Presidential Records,” the Wall Street analyst explains.

However, starting in 2001, “Bill Clinton opened one office in New York City that did not register validly with local authorities and embarked upon an expansive mission to fight, in theory, global challenges including HIV/AIDS and ‘climate change.'”

While Hillary Clinton was US Secretary of State, The Clinton Foundation received millions of dollars from foreign governments, and at least one contribution was in violation of a State Department ethics agreement, the Washington Post reports.
Lobbyism & Pay-to-Play Schemes

In addition to allegedly cashing in on their charities, the Clintons have also been accused by conservative observers of engaging in “pay-to-play” schemes with foreign lobbyists and government officials while Hillary Clinton served as a senator and secretary of state. It appears that the Clintons concealed these grants for quite a while, the Wall Street analyst says.

By 2003, however, Bill Clinton and Ira Magaziner started issuing press releases announcing massive government grants from nations including Ireland, Canada, Norway, Australia and others, according to Ortel.

“By the time Hillary Clinton became a senior cabinet member, overseeing gigantic foreign aid flows, the Clinton Foundation was seriously flouting a raft of disclosure laws, for which, small charities without political connections are severely punished,” he notes.

However, unlike Trump associates, the Clintons and their charities have never been properly investigated and brought to justice, although there’s enough evidence, including in public domain, deserving IRS, DoJ and FBI’s attention, according to Ortel.