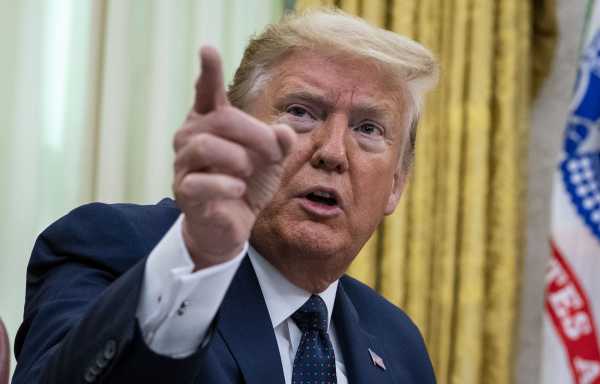 Despite President Donald Trump’s threats that Republicans might shut down social media companies in retaliation for fact-checking his tweets, the executive order he signed on Thursday unsurprisingly doesn’t come anywhere close. Even in the order’s more limited scope, legal experts say it will be difficult to enforce.

Trump’s new order aims to limit social media companies’ legal protections if they don’t adhere to unspecified standards of neutrality. It comes just two days after Twitter fact-checked two of his tweets that made misleading claims about voting by mail in the 2020 elections.

“Twitter is completely stifling FREE SPEECH, and I, as President, will not allow it to happen!” Trump tweeted on Tuesday. On Wednesday, Trump followed up by threatening to “strongly regulate social media companies” or close them down altogether, and cautioned that a “big action” is coming.

The order calls for limiting protections that a law called Section 230 offers tech companies like Twitter, Facebook, and Google by not holding them responsible for what users post on their platforms. (Recode’s Sara Morrison explains everything you need to know about Section 230 here.) To do this, the order tasks regulators at the Federal Communications Commission and the Federal Trade Commission to create new rules that could pull back some of those protections, potentially opening them up to a litany of lawsuits for libel, defamation, and other complaints.

“Currently, social media giants like Twitter receive an unprecedented liability shield based on the theory that they are a neutral platform, which they are not,” Trump said in the Oval Office on Thursday. “We are fed up with it. It is unfair, and it’s been very unfair.”

It argues that companies like Twitter, Facebook, and YouTube “are engaging in selective censorship that is harming our national discourse” that allegedly favors certain political viewpoints over others. Some conservatives have long argued — without real evidence — that social media platforms are biased against their politics.

Critics — including reportedly, some of Trump’s most conservative advisors — have warned the order could set a dangerous and unconstitutional precedent that the President can use executive powers to effectively censor companies for political reasons. Many legal experts say the order is largely toothless and will be challenged in court.

“The most obvious thing I would say about this order is that it’s not enforceable — it’s kind of a piece of political theater,” Kate Klonick, a professor of internet law at St. John’s University told Recode (Klonick was speaking about a draft of the order which was similar to what ended up being signed on Thursday).

Still, the order is being viewed as a symbolic threat to social media companies, particularly as they continue to grapple with moderating contentious speech.

Conservatives accusing the social media companies of liberal bias point to times when these platforms have banned conservative figures, such as far-right commentator Alex Jones and right-wing activist Laura Loome, after they repeatedly violated the sites’ harassment policies.

Many liberals, meanwhile, have argued that these platforms aren’t doing nearly enough to moderate the conspiracy theories, hoaxes, and politically misleading content shared on their sites — such as President Trump’s Facebook ads that purported to be links to the US census but instead directed people to a survey for his reelection campaign. After Recode and others reported on the misleading ads, Facebook eventually took them down.

Another unintended side-effect of Trump’s executive order could impact his own tweets: Tech companies might become “more aggressive about policing messages that press the boundaries,” as The New York Times reported, to protect themselves from being sued without the protection of Section 230.

“This is a hopeless quagmire to enter,” Former FTC chairman Bill Kovacic, who was appointed by President George W. Bush, told Recode. Kovavic said the order presents immediate legal challenges, and that the bipartisan FTC and FCC will likely be hesitant to enforce this. “There should be conservatives objecting too, because what happens if a future President who’s a Democrat gets tired of listening to Fox — or can’t stand the National Review anymore?”

The FCC and the FTC did not immediately respond to a request for comment.

As I previously explained, aside from getting the FTC and FCC onboard, Trump also has serious challenges ahead in trying to enforce this order, primarily because it arguably violates the First Amendment.

Trump can, however, try to get legislation passed that would selectively cull tech companies’ legal protections unless they follow certain standards of neutrality, and his executive order tasks the Attorney General to draft a proposal for such a law. But Democrats — some of whom have also been pushing for reform to Section 230, though not in the way Trump is suggesting — would need to also get on board in order to tally enough votes to pass the legislation through the Democrat-controlled House of Representatives.

In the meantime, the big question is what happens next for social media companies. Will they start to roll back the new policies they’ve incrementally put in place around policing hate speech, harmful posts, and misleading information?

“I don’t think [social media companies] will change their content moderation policies overnight. It really depends how the public reaction to executive order is,” said Klonick. Twitter and other companies could “play a little bit of chicken,” to see if people pursue legal action against them — or they could try to seek a court injunction to stop enforcement of the order.