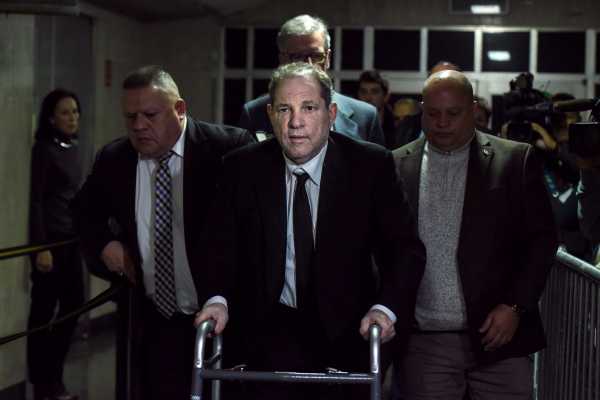 Harvey Weinstein arrived at Manhattan Criminal Court on Monday morning to stand trial on sexual assault charges. Using a walker after recent back surgery, he passed by dozens of protesters, some bearing signs with messages like “justice for survivors.”

It was the latest chapter in what’s become one of the defining stories of the modern Me Too movement. More than 80 women say the producer and former Weinstein Company head sexually harassed or assaulted them. While the reports go back decades, Weinstein never faced criminal action — until now.

Weinstein faces multiple charges of sexual assault and rape in connection with allegations by two women: one who says he raped her in 2013, and one who says he forcibly performed a sex act on her in 2006. Several other women will testify as well, in an effort to establish a pattern.

Weinstein has pleaded not guilty and denies allegations of nonconsensual sex. But the trial will be a chance for some of the women who say he assaulted them to speak in court for the first time.

While their stories have become front-page news, the women who have spoken out against Weinstein have gotten little closure so far. Under a tentative settlement deal reached late last year, more than 30 women would split about $24 million from the Weinstein Company, with many getting less than $500,000 — a paltry sum, to many, especially when some women say their entire careers were derailed by their experiences with Weinstein. Meanwhile, the women who came forward have faced considerable fallout, with one telling the Cut she “felt stripped of my right to privacy” after her name was in the New York Times.

Through all this, Weinstein himself has been defiant and largely unrepentant, telling the New York Post in December that “I made more movies directed by women and about women than any filmmaker” and complaining that “my work has been forgotten.”

His trial, which could take several months, will decide whether he continues to walk free or whether he will face a penalty of up to life in prison. It will also serve as a marker of how, if at all, the Me Too movement has affected the criminal justice system. A few high-profile men, like Bill Cosby and Larry Nassar, have been sentenced since the movement entered its most public phase. But it was the allegations against Weinstein that helped bring that movement to nationwide attention in 2017. The way those allegations are handled will say a lot about how much has changed since then, and how well, if at all, the American public listens when people come forward to report sexual assault.

Weinstein, a producer who became famous for award-winning films like Good Will Hunting and Shakespeare in Love, has been accused of dozens of acts of sexual assault and harassment, some dating back to the 1990s.

He’s come close to facing charges in the past — in 2015, model Ambra Battilana Gutierrez reported to New York police that Weinstein had grabbed her breasts and tried to reach up her skirt. But Manhattan District Attorney Cyrus Vance declined to press charges. (A few months later, Weinstein’s lawyer David Boies made a donation to Vance’s reelection campaign, though Vance, who is still DA, says that was unrelated to his decision in the case.)

Then came an explosive story by New York Times reporters Jodi Kantor and Megan Twohey, in October 2017, in which actress Ashley Judd and seven others described being victimized by Weinstein. More reports followed, Weinstein lost his job at the head of the production company he founded, and in May 2018, the producer was arrested in Manhattan.

The charges are in connection with reports by two women: one, Mimi Haleyi, has stated publicly that Weinstein forcibly performed a sex act on her in 2006. Another, who has not spoken publicly under her name, says that Weinstein raped her in 2013.

Four other women will also testify to help bolster the prosecution’s case that Weinstein had a pattern of sexual assault and harassment. The most high-profile of these is actress Annabella Sciorra, who says that Weinstein raped her in the early ’90s.

These are only a few of the women who have said Weinstein harmed them. However, many women have reported assaults or harassment that took place outside the jurisdiction of Manhattan prosecutors.

Weinstein could face consequences for allegations outside of New York as well. On Monday, the Los Angeles County District Attorney’s office filed four sexual assault charges against the producer.

People who reported misconduct by Weinstein have struggled to get closure

For those who have spoken out against Weinstein, his trial is the latest step on an uneven road that may or may not end in justice. In addition to the criminal proceedings, Weinstein and the Weinstein Company have also been fighting civil suits by many women. In December, the now-bankrupt company reached a tentative deal in which 18 women would split a $6.2 million settlement, with none of them getting more than $500,000, Kantor and Twohey reported. A separate fund of $18.5 million would be set aside for plaintiffs in a class-action suit and any future claimants.

It’s a far cry from a $90 million victims’ compensation fund that had been discussed in 2018, according to Kantor and Twohey. One attorney for the accusers called it “one of the worst settlements I’ve ever seen” in an interview with the Cut. Under the deal, Weinstein will not have to admit wrongdoing or pay anything himself.

Meanwhile, the women who came forward with reports of assault and harassment by the producer continue to grapple with the consequences. Lauren O’Connor, who wrote a 2015 memo describing a “toxic environment for women” at the Weinstein Company, told the Cut last year that after she was named in the Times, she had constant nightmares and “felt like all control that I had over my own life was taken from me.” She spent six figures on therapy and lawyers to help get photos of her taken off the internet.

“I do not know to this day whether change was made,” she said.

Weinstein, for his part, enters his trial with apparently little remorse for the acts of which he’s been accused. In October, while out on bail, he showed up at an event for young actors at a New York comedy club. When an actor confronted him, they, not the producer, were asked to leave.

“Harvey Weinstein was out with friends enjoying the music and trying to find some solace in his life that has been turned upside down,” a spokesperson for the producer said at the time. “This scene was uncalled for, downright rude and an example of how due process today is being squashed by the public, trying to take it away in the courtroom too.” (The representative also said Weinstein’s team had not asked the actor to leave.)

Then, in December, Weinstein gave an interview to the New York Post while recovering from back surgery in an “elite wing” of a Manhattan hospital. He bragged about giving a lucrative contract to Gwyneth Paltrow, one of the actresses who has accused him of misconduct. He also trumpeted films like Transamerica and Paris Is Burning that he said tackled “social issues.”

“I want this city to recognize who I was instead of what I’ve become,” he said.

Over the next several weeks, Weinstein’s past and present will be evaluated by a New York jury. Selection of jurors alone is expected to take up to two weeks.

The trial will be a referendum on the producer himself. As the Me Too movement gained steam nationwide, he was often held up as the worst of the worst — someone who could never be forgiven or allowed a comeback. And yet he clearly believes he deserves one, and he has some defenders apparently willing to help make that happen. Now a trial will determine whether he will serve prison time — or walk free to pursue a second act.

The trial will also be, in many ways, the most high-profile Me Too case so far. While both Cosby and Nassar were tried and sentenced after the movement reached its most public phase, both were the subject of allegations that had become public years before. Weinstein’s case in many ways defined the current era of Me Too, and his trial will show how much, if at all, that movement has affected the criminal justice system.

For example, defense lawyers for Cosby, both in his initial 2017 trial and in the 2018 retrial that put him behind bars, resorted to blaming and smearing the women who reported crimes by him.

“She wanted to be a star,” defense attorney Kathleen Bliss said of Heidi Thomas, who said Cosby drugged her and tried to force her into oral sex in 1984. “She’s living the dream now.”

Whether attorneys try this at Weinstein’s trial, and how the jury and the media receive it, will be one measure of how much progress has been made since 2018.

Ultimately, however, Weinstein’s trial can only do so much when it comes to the larger problems of sexual assault and harassment in America. While there’s evidence that Me Too has increased reporting of sex crimes, the vast majority are not reported to police. Survivors have many reasons for not reporting, from a fear of not being believed to the fact that police officers, too, commit sexual misconduct.

Even when survivors do report, only a small fraction of those reports ever make it to trial, let alone leading to a conviction. And an increasing number of anti-sexual violence advocates are looking for responses to sexual assault that are outside the conventional criminal justice system, such as restorative justice.

Regardless of what happens with Weinstein’s trial, America’s struggles to prosecute and prevent sexual misconduct will be far from over. Still, the process is important. Critics of Me Too have long argued that sexual misconduct cases should not be adjudicated in the “court of public opinion.”

Now, such a case — and one of the most high-profile, at that — will be adjudicated in court. For the first time, women will be testifying against Weinstein in front of a judge and jury — the most formal and officially sanctioned venue there is for relating one’s experiences. Whether the jury and the American people actually listen to them will say a lot about how far Me Too has come, and how far it has yet to go.