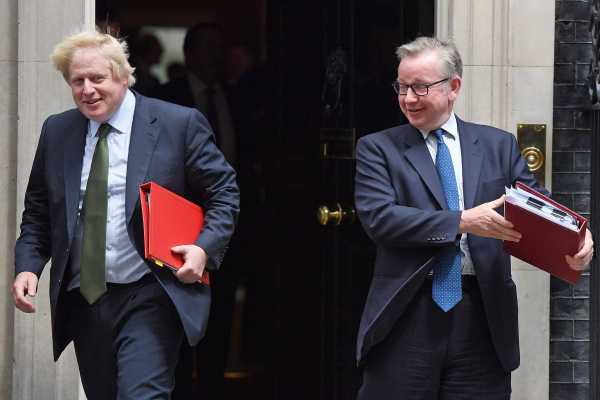 And then there were three.

That’s how many contenders still have a chance to replace outgoing British Prime Minister Theresa May.

Boris Johnson, the former foreign minister, once again confirmed his frontrunner status on Thursday, commanding first place after the fourth round of voting by Conservative members of Parliament.

Johnson won 157 votes, building on his support from Wednesday. He finished far ahead of the rest of the field. The runner-up, environment minister Michael Gove, secured just 61 votes. He overtook foreign minister Jeremy Hunt, who came in third this time with 59 votes.

Sajid Javid, the home secretary, got knocked out. Javid, one of the most pro-Brexit of the remaining contenders, had barely eked out wins in the previous rounds — so his elimination isn’t that much of surprise.

There will be one more round of voting Thursday to select the two finalists. Barring a stunning upset, Johnson will almost certainly make it through. Hunt and Gove — who ruined Johnson’s chances of becoming prime minister in 2016 — will be battling for what looks like a distant second.

A total of 10 candidates were vying to be the next leader of the Conservative Party and the future prime minister of the United Kingdom. Three were eliminated in this first ballot and one dropped out shortly afterward. Former Brexit Secretary Dominic Raab got ousted in the second round. International secretary Rory Stewart lost in the third round, and now Javid follows him.

Whoever wins the still-crowded contest will be faced with the daunting task of trying to finalize the UK’s break up with the European Union, which is currently scheduled for October 31.

Brexit is dominating the race, and each candidate is trying to promote their Brexit bona fides and make the case that they have the best strategy to steer the UK through its divorce with the EU.

This leadership contest is expected to stretch on for weeks, with a new prime minister taking over around the second half of July. Here’s what to expect, and what to know about the candidates competing to be the UK’s next leader.

A brief guide to the Conservative leadership contest

Prime Minister Theresa May formally stepped aside as leader of the Conservative Party on June 7, allowing the contest to replace her to begin on the 10th. May will remain as prime minister until the next leader is selected, likely sometime in July.

The next prime minister will also come from the Conservatives (or Tories, as they’re called). That’s because the actual makeup of Parliament isn’t changing, and the Conservatives will retain control of government. The next general election isn’t scheduled until 2022, so presumably, whoever takes over for May will stay in power at least until then. (Earlier elections can’t be ruled out, of course, but they’re not an option right now.)

This also means the Conservatives — specifically, Conservative members of Parliament (MPs) and party members — will select the next prime minister.

Conservative MPs vote in secret ballots. In the first round of voting last week, candidates who didn’t get backing from more than 16 MPs were eliminated from the contest. Three of the 10 contenders didn’t make the cut. One, Health Secretary Matt Hancock, made it through to the next round, but decided to end his candidacy anyway.

In the second round, which took place Tuesday, candidates had to win the support of more than 32 MPs. All except one — Dominic Raab — made the cut.

Starting in the third round, the lowest vote-getter was automatically eliminated. On Wednesday, that was Rory Stewart. On Thursday, Javid lost.

MPs will now vote one last time on Thursday to decide the two finalists. After they’re selected, the Conservative Party’s 160,000 or so official members will vote. Whoever wins will become the next Conservative leader and prime minister.

Who are the candidates?

The contenders range from moderate Conservatives to more hard-right Brexit champions, or “Brexiteers.”

Brexit is by far the biggest challenge facing the next prime minister. It’s currently scheduled for October 31, 2019 — just a few short months after the next leader takes over.

Conservatives are also under pressure from the rising Brexit Party, which dominated the European parliamentary elections on the single issue of the UK leaving the EU. The Conservatives have taken the Brexit Party’s success as a warning that if they can’t deliver Brexit under a new leader, it may doom the party altogether.

But the next prime minister, whatever his or her position, will inherit the same Brexit deadlock that ultimately ended May’s premiership.

May’s Brexit deal failed in Parliament three times. But right now it’s the only deal on offer, and the EU has insisted it will not renegotiate the agreement, no matter who the next prime minister is.

That hadn’t stopped most candidates from claiming they’d be successful at persuading the EU to come back to the negotiating table, despite the EU saying the opposite.

And a few Brexiteer Tory candidates — most notably the current frontrunner, Boris Johnson — have also said they’d be willing to pull the UK out of the EU without a deal on October 31.

Whether any candidate will actually follow through on a no-deal Brexit and risk the potentially catastrophic economic consequences is another question entirely. But here’s a brief look at the remaining candidates fighting to be prime minister, with some details on where they stand on Brexit. They’re listed in order by the number of votes they received on Thursday, and noted below who’s been eliminated:

Still in the race

Out of the running