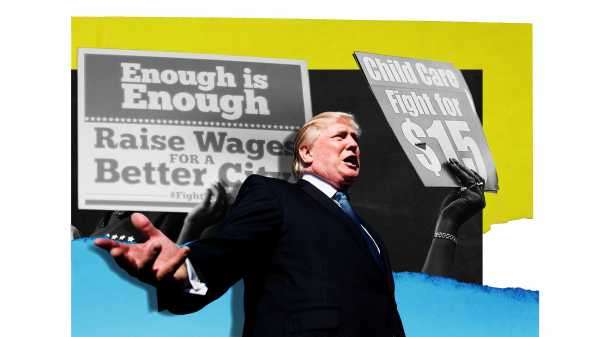 Joe Biden supports an increase to the national minimum wage; Donald Trump does not. Biden’s is a widely popular position, but one that he and many other Democrats often fail to highlight. During the final presidential debate, “wages” was the most-searched term on Google, as viewers seemed surprised to see that the issue was really even in play.

In the 2020 election, Florida voted 60-40 in favor of Amendment 2, a ballot measure to increase the state’s minimum wage to $15 by September 30, 2026, even as it also voted to keep President Donald Trump in office. Beyond signaling that people just aren’t ideologically consistent, there is another — and perhaps more important — read into Florida’s results: Increasing wages is an attractive proposition to a lot of people, and it’s a position Democrats should embrace and highlight more.

“Across the board, it is not necessarily a left or right issue. Voters across the aisle actually know that it is impossible in Florida and around the country [to] actually survive on $8.56 and what the current minimum wage is,” Allynn Umel, national organizing director of the Fight for $15, a group that advocates for a $15 minimum wage and a union, said on a call with reporters Wednesday.

Democrats put a $15 minimum wage into their platform in 2016, thanks to years of activism and a big push from Sen. Bernie Sanders (I-VT). Along with issues such as Medicare-for-all and the Green New Deal, a higher minimum wage is something progressives tend to talk about quite a bit — but for mainstream Democrats, it’s less so. On the night of that final debate, even political junkies were surprised to see the wage conversation and be reminded of Biden’s position.

In the days, weeks, and months to come, Democrats are likely going to do a bit of soul-searching with regard to the 2020 election and why they fell short in some House, Senate, and local races they expected to win. There are no easy answers, but one place to look might be putting more popular ideas, including a $15 minimum wage, front and center.

What Florida voters just did for themselves in approving a minimum wage ballot measure, Republican lawmakers in the state wouldn’t have — in fact, they outright opposed it. But Democrats would have, and more voters should be aware of that.

Florida’s Amendment 2 will increase the state’s minimum wage from the current $8.56 to $15 by September 30, 2026. The change is incremental, requiring employers to increase their wages annually by $1 for the next several years; after it hits the $15 mark, wages will be adjusted to inflation.

This is a big deal: Florida is just the eighth state in the country and the first state in the South to raise its minimum wage to $15 an hour. The left-leaning Florida Policy Institute estimated that Amendment 2’s passage will result in a wage increase for 2.5 million workers in Florida.

The drive toward a $15 minimum wage in Florida was a bit of a peculiar one in that it was, in part, spearheaded by a very rich man: John Morgan, a wealthy personal injury lawyer who previously financed a medical marijuana initiative in the state. He formed a political committee, Florida for a Fair Wage, to help drive the effort, and teamed up with University of Florida law professor Jon Mills to draft the proposed constitutional amendment. He also spent millions of dollars trying to get it passed.

To be sure, Morgan did not act alone. Workers, unions, and other groups from inside and outside of Florida worked on the issue, knocking on thousands of doors and sending millions of texts to voters. Fast-food workers in Tampa, Orlando, and Miami went on strike in support of the ballot measure’s passage. The editorial boards of the Miami Herald, the Orlando Sentinel, and the Palm Beach Post, among others, endorsed the measure.

“This is something that is monumental. We have made history once again,” Alex Harris, a fast-food worker at Waffle House in Tampa Florida, said in the Fight for $15 call on Wednesday. “We’ve got to continue to fight on the federal level until every worker — every worker — across the United States of America has the opportunity to make a living wage.”

Faith Booker, who works at both McDonald’s and Burger King, emphasized the broader context in a statement issued by Fight for $15, pointing out that millions of low-wage workers have suddenly been deemed “essential” during the Covid-19 outbreak. “We turned cheers for essential workers, who have risked their lives during the pandemic while being paid poverty wages, into power,” she said. On the press call, Booker said she believes a higher wage “will mean a better future for myself or my kids.”

On the flip side, the Florida Chamber of Commerce and the Florida Restaurant Lodging Association came out in strong opposition to Amendment 2. Ahead of the vote, Republican Gov. Rick DeSantis warned voters that “now is not the time” to raise the state’s minimum wage. (To be clear, Amendment 2 does not raise the minimum wage to $15 overnight, it will happen gradually over the next six years.) Florida Republican Party Chair and state Sen. Joe Gruters, as well as incoming Florida House Speaker Chris Sprowls, also spoke out against the amendment.

While Fight for $15, unions, and workers celebrated Tuesday’s ballot measure vote, opponents of the measure lamented the outcome. The Florida Restaurant & Lodging Association said in a statement that the amendment’s passage means “putting jobs at risk and businesses in jeopardy of closing,” citing a study it commissioned in the lead-up to the vote suggesting Amendment 2 would cost the state more than 150,000 jobs. Florida Chamber of Commerce President and CEO Mark Wilson said in a statement that the amendment is “bad for Florida and even worse for Floridians.” The chamber has argued that it will result in an increase in the cost of living.

On the Fight for $15 call, Sammy Conde, a Starbucks worker based in Orlando, reacted to the cost argument: “Prices have already gone up. Our wages haven’t.”

Some people have expressed concern that Amendment 2’s passage will go the way of 2018’s Amendment 4, a measure to restore voting rights for ex-felons in Florida. Voters approved the measure, only to see the state’s Republican-controlled legislature put in place a law requiring ex-felons to pay outstanding court fees before voting — a maneuver opponents of the law have said essentially amounts to a poll tax.

It’s unclear whether state Republicans and business groups will try to limit or hamstring what Amendment 2 is supposed to accomplish. The Florida Chamber of Commerce, the state’s Restaurant & Lodging Association, Gruters, and Sprowls did not return requests for comment on any potential plans to continue the fight.

This is not the first time in recent history that Florida voters have approved a ballot measure to increase wages. In 2004, Florida residents voted in favor of increasing the state’s minimum wage to $6.15 and then adjusting it to inflation.

Would you like to make more money? Well, it turns out most people would.

The results out of Florida on Tuesday left some people scratching their heads: Who were these people who voted for both Amendment 2 and Republican candidates, including Trump? Biden supports a nationwide $15 minimum wage; Trump has said it should be a state-by-state decision and that raising wages too much would make businesses close.

But the issue isn’t actually super-complicated: People like the idea of paying workers better.

My colleague Matt Yglesias recently laid out some of the polling around wage increases. Overall, according to Pew Research, two-thirds of Americans support raising the federal minimum wage to $15 an hour. Unsurprisingly, 86 percent of Democrats support it, but perhaps more surprisingly, 43 percent of Republicans do too. Though it’s not a majority, it’s more than you might think, given some of the rhetoric from GOP leadership on this. Political scientists Yanna Krupnikov and John Barry Ryan recently explained in the New York Times that both Democrats and Republicans who don’t closely follow politics think the issue of hourly wages is one of the biggest America faces.

When Florida last voted to increase its minimum wage, it also voted to reelect George W. Bush. (During his second term, Bush signed a law increasing the federal minimum wage.)

The conversation around a $15 minimum wage is a complicated one. Although it obviously leads to people being paid more, we don’t fully know what it means for costs and jobs. A 2019 study from the Congressional Budget Office estimated that a federal $15 minimum wage would lift 1.3 million people out of poverty but cost the US an equal number of jobs. (Other economic studies have suggested the job-loss risk is not that big.)

One of the issues is that not enough places have put a $15 minimum wage into practice to see how it actually works, so Florida’s vote to gradually increase it will be a good way to gather some evidence.

But for now, workers and advocates are celebrating not only Florida’s vote, but also what it could mean for workers across the country. With every $15 minimum wage victory, activists believe they embolden workers and voters in other places to continue their fights for better and fairer pay.

Florida’s vote should also send a signal to Democrats that a $15 minimum wage is something they should talk about more. Not every state will put out a ballot measure for people to vote on it themselves — and if it’s left to lawmakers to address the issue, Americans should be reminded that Democrats say they will.

This is an unprecedented election. Millions of people are relying on Vox for clear explanations of the state of the vote, whether the election is fair, and what the outcome might mean for the policy decisions that could affect their lives. We are monitoring vote counts around the clock, talking to sources, and channeling the firehose of news into comprehensible information. And that work takes resources. You can help support our explanatory journalism, and keep it free for everyone, by making a financial contribution today.