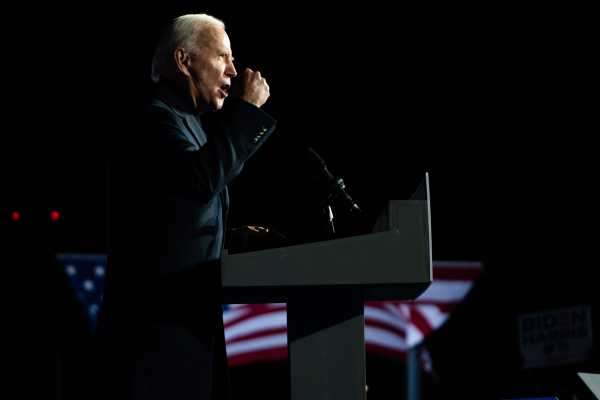 While votes are still being counted in Michigan, President Trump retweeted a claim that an update in Michigan’s vote count yielded 138,339 votes for Joe Biden and 0 for Trump. The tweet that the president amplified — which was later deleted — included side-by-side screenshots from the Decision Desk election map that appeared to show an unusual jump. In reality, though, there was no conspiracy: A data glitch had momentarily caused the count to change.

Decision Desk HQ, a firm that collects and quickly reports election results, explained the brief confusion related to the viral maps. Nevertheless, the incident is a reminder that small technical hiccups in the electoral process have the capacity to devolve quickly into misinformation.

Here’s the backstory: The screenshots came from Decision Desk HQ. They appeared to represent a before-and-after glimpse at the results in Michigan, one that showed Biden receiving all of the votes in one update while Trump’s votes remained the same. The misleading post implies that Biden’s votes had grown from 1,992,356 votes in Michigan to 2,130,695 votes while Trump’s remained constant at 2,200,902 votes.

Michigan is still counting its votes. Vox has live results.

Decision Desk headquarters, which has partnered with Vox for election results, told Recode that the apparent result was a “simple error from a file created by the state that we ingested” — in other words, a numerical typo.

“DDHQ does not correct/amend/adjust any state provided file. The state noticed the error and produced an updated count,” Decision Desk said in a statement. “This happens quite a bit on election night, and we expect other vote tabulators in MI experienced this error and corrected in real-time like we did.”

In fact, data shows that the uneven jump in favor of Biden did not actually happen:

Still, images of the glitch have already gone viral among influential, pro-Trump accounts, which attempted to frame them as evidence that there’s something fishy happening with Michigan’s vote counts and that the screenshots could potentially be proof of voter fraud. 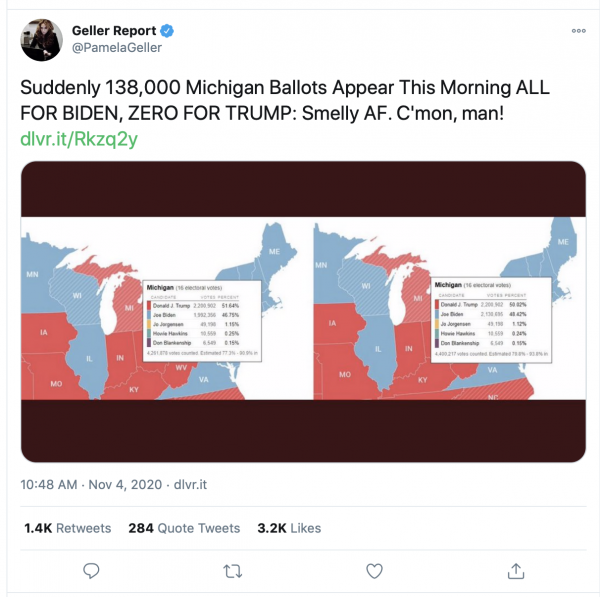 Some of the tweets sharing the same images do not have warning labels or any other notices from Twitter. And despite being labeled and hidden, Trump’s post had been “Liked” more than 129,000 times and shared more than 59,000 times by Wednesday afternoon. The same misleading narrative is also showing up on Facebook, and only some of the posts carry a label directing people to election information.

Twitter took action against Trump’s retweet, adding a label that hides the content, and the person who posted the original tweet has since deleted it. Notably, the tweet about Michigan vote counts was just one of several Trump posts that aimed to question the integrity of the vote-counting process following Election Day.

This incident and others like it serve as a reminder that small snags in the electoral process can be quickly twisted into misinformation that can proliferate at a startling rate. In any case, the president’s tacit endorsement of such misinformation stands to cast doubt on the results of the election. And once they’ve been exploited by those hoping to shift a particular narrative, these false claims can be difficult for the social media platform to contain.