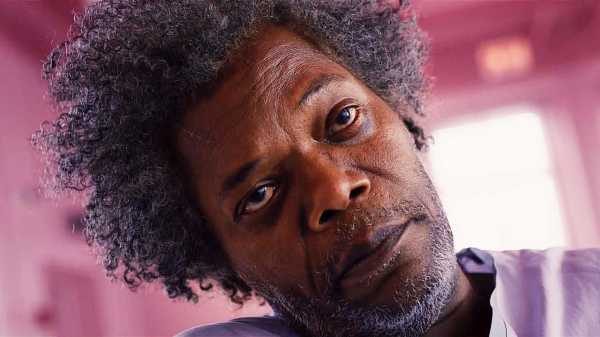 The most exciting thing about M. Night Shyamalan’s 2017 thriller Split, starring James McAvoy as a kidnapper with dissociative identity disorder, came right at the end, after his character (named Kevin Wendell Crumb but nicknamed “the Horde”) let one of his captives, a teenage girl named Casey (Anya Taylor-Joy), escape.

While news of a killer on the loose played on a TV in a diner, several patrons noted the similarity between this new case and one from 15 years earlier, in which a man in a wheelchair was incarcerated after authorities discovered he had masterminded a grisly train accident. The patrons couldn’t remember the name of that murderer, until another man in the diner turned to them and said, “Mr. Glass.”

That man was Bruce Willis, in an uncredited cameo as David Dunn — his character from Shyamalan’s 2000 film Unbreakable. In that film, Dunn is an ordinary Philadelphian who discovers he has seemingly supernatural powers: immense physical strength, the capacity to withstand bodily violence, and the ability to see people’s darkest secrets just by brushing against them. It’s Dunn who discovers that Elijah Price (Samuel L. Jackson) — nicknamed Mr. Glass at a young age, for his exceedingly fragile bones — actually planned the train wreck from which Dunn alone emerged unscathed. And Price getting arrested was what the diner patrons remembered.

Dunn’s appearance at the end of Split signaled that the film was actually a kind of backdoor sequel to Unbreakable. It hadn’t been advertised that way, and other than taking place in Shyamalan’s hometown of Philadelphia (a common setting for the director’s work), there weren’t any indications that the two films existed in the same cinematic universe until that final scene.

So the revelation set Shyamalan fans abuzz with speculation about a future third movie that would involve both characters. And when Split grossed $278 million (on a budget of $9 million), that possibility became a reality: Three months after Split’s release, Shyamalan announced that he’d started production on a sequel, named Glass, presumably for Jackson’s character.

Sequels are risky for any director; fans have expectations, and filmmakers want to replicate success without simply copying the same formula. But making a crossover sequel like Glass — which would have to draw together not just characters from two different films but the very different tones of those films — seemed especially hard.

Shyamalan always swings for the fences. Glass is no exception.

This time, though, it’s a swing and a miss.

To understand Glass, you’ll need to brush up on the two storylines it combines

You’ll want to watch (or rewatch) both Unbreakable and Split before seeing Glass because the movie doesn’t spend a ton of time recapping either one. Glass picks up a couple of years after Split ended, and 19 years after the events of Unbreakable.

As with all of Shyamalan’s films, to say too much about Glass’s plot is to spoil the movie. So I’ll just set it up: Dunn, aided by his now-grown son Joe (Spencer Treat Clark), runs a home security company that’s a cover for his “real” job: patrolling the city as a vigilante crime fighter in a rain poncho. As Glass begins, he catches wind that teen girls have been disappearing all over the city and figures out (with some sleuthing help from Joe) that they’re being held in a warehouse.

Their captor is Split’s “the Horde,” the multiple personalities living inside Kevin Wendell Crumb. And those personalities are eagerly awaiting the emergence of his fiercest, most vengeful and deadly personality: the Beast.

Dunn frees the girls and fights the Beast, but through a series of unfortunate events, both men end up in a mental institution, under the care of Dr. Ellie Staple (Sarah Paulson). Dr. Staple specializes in patients who labor under the delusion that they are comic book characters. And of course, she has another patient: the heavily sedated Elijah Price, a.k.a. Unbreakable’s Mr. Glass. 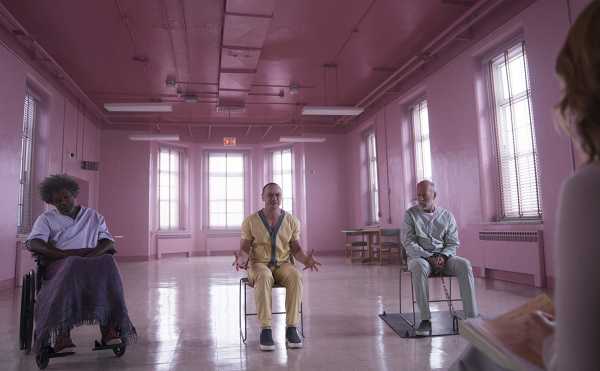 This sounds like a great setup for a movie, I know. What ingenious plan does Shyamalan have for drawing together these characters? A strong, reluctant, intuitive hero who is weakened only by water (hence the rain poncho); a criminal mastermind with bones like glass; a man with 24 distinct personalities living inside him — surely, somewhere in here is a combination that will make for great storytelling.

So it’s really weird — and disappointing — that Glass feels so inert. It’s a cool-sounding concept that’s obviously searching for a reason to exist, and failing.

Glass gets lost in the maze its combined stories create

The charm of Unbreakable, with its slow and muted realism, was that it felt like it was lightly deconstructing the very idea of comic book storylines, suggesting that they’re actually based in reality and then gaming out what it might look like for one to play out in someone’s real life. It didn’t matter that the way Elijah Price explained his theories about comics — that they tell a sort of unwritten history of the world, based on events someone experienced in the past — didn’t make a huge amount of sense under scrutiny. The pathos of David Dunn’s story, in which he struggled with his relationships with his wife and son while discovering he may have been put on Earth for a greater purpose, made the movie work; it’s a drama, more than a thriller.

And the more kinetic Split, to the extent that it did work (for my money, it’s a much weaker film than Unbreakable), was largely carried by the hypnotic performance of James McAvoy, who gave the impression that there might actually be 24 different characters living just beneath his skin as he morphed from one to the next, flipping accents and affects and being genuinely menacing in the process.

For Glass to work, it had to combine the frenetic energy of Split and the calm pacing of Unbreakable, weaving together Price’s theories about comic book stories, Dunn’s heroics, and Crumb’s unpredictability into one high-stakes tightrope. 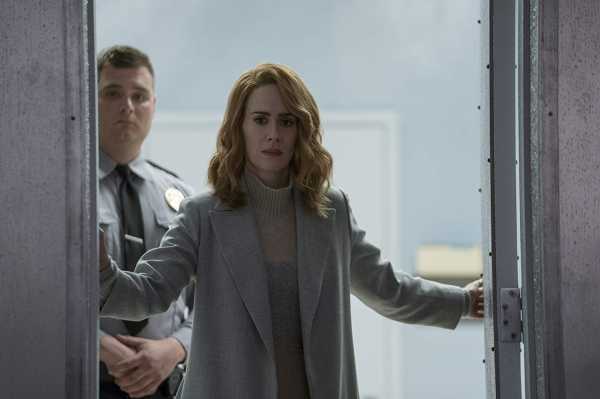 Instead, it’s frayed and sagging. Price’s adulations of comic tropes no longer feel exciting and intriguing, but faintly ridiculous, as if they were scripted by someone who’s only read a few comic books and is pretty sure they know what they’re about. At one key moment, Price shouts, “Ah, the classic turn!” Another character, one who ostensibly reads comics, has to have the concept of a “showdown” explained as a scene where the bad guys fight the good guys.

One unavoidable problem Glass faces is that of timing: The world of movies into which Unbreakable was released in 2000 was obviously and unquestionably different from Glass’s 2019. Nearly two decades later, the release calendar and box office are dominated by huge-budget, high-profile movies based on comic books. Audiences know there’s always a showdown. We know there are good guys and bad guys, and a turn of events. So … what?

To be fair, Glass very briefly seems to acknowledge this, starting to offer what seems like a critique of toxic fan culture on the internet. There’s a pair of YouTube-obsessed dudes who go around “Superman punching” random strangers, then uploading the footage for the likes, and who get swiftly dispatched by Dunn. Later, Paulson’s Dr. Staples delivers a short rant that could have been ripped from an op-ed about comic book conventions and those who are obsessed with them. By the end, the movie suggests that made-up comic book heroes are preventing people from recognizing their own latent powers, and that maybe there’s a plot to keep humans down, and that maybe the internet can help change that?

I like this idea, but it’s so mired in other subplots that it’s easily lost. And because the whole point of this cinematic universe is to drag comic book tropes and archetypes into the real world, Glass succumbs to one of Split’s biggest problems.

What was troubling about Split was its suggestion that your trauma is your superpower — that in a sense, it’s people who have experienced horrific things (particularly in childhood) who are best suited to survive in the world. Split revealed that Kevin Wendell Crumb was abused by his mother, and his personalities developed to help him survive. Casey was able to survive the attack of Crumb’s fierce, violent “the Beast” personality because she had been abused by her uncle, and surviving the Beast subsequently gave her the strength to escape capture.

That concept continues in Glass, which brings in Dunn’s and Price’s own traumatic experiences to explain who they are — and indeed, that’s something Dr. Staples latches onto while treating them. It’s also consistent with comic book stories, which often craft heroes’ origin stories around an unthinkable trauma from their youth, and the real reason the movie is called Glass: It’s shattered people (shattered, like glass, get it?) who are really able to tap into their own inner strengths. 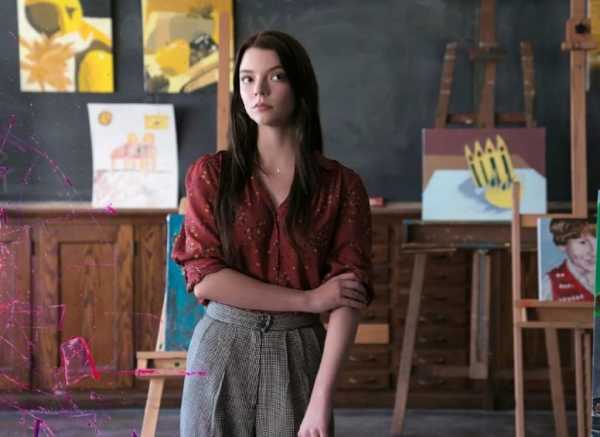 But Glass takes that idea to its natural end, particularly in interactions between Casey (returning from Split to play a key role in this film) and Crumb’s characters. I won’t say what happens, but it feels pretty wrongheaded to suggest that abused women can probably save their broken male captors from themselves, if they’ll just be kind to them.

To be fair, this seems less like a message of the film than a result of Shyamalan not really thinking about its story; Glass is more wrapped up in trying to cram two storylines together than in crafting its own, independently good one. Which is to say: Glass feels like fan service that tries too hard to replicate earlier success, and manages to diminish both Unbreakable and Split in retrospect.

It’s a movie ostensibly interested in how comic book stories work, but it has the same problems as a lot of the comic book movies hitting the big screen these days. The big twist: Shyamalan seems to have not learned very much at all from his own movies.

Glass opens in theaters on January 18.