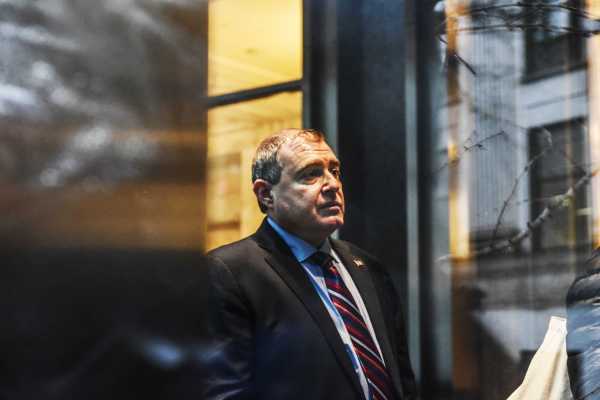 He said a lot of things. Can he back them up?

Former Rudy Giuliani fixer Lev Parnas made a series of dramatic new claims Wednesday about President Donald Trump, Trump administration officials, and the overall effort to pressure Ukraine that led to Trump’s impeachment. And now, the question is whether he can back them up.

In an interview with MSNBC’s Rachel Maddow, Parnas claimed that President Trump knew “exactly what was going on” with his and Giuliani’s effort to get the Ukrainian government to announce investigations that would help Trump politically: “He was aware of all my movements.”

Parnas also made assertions about what happened during various moments in the scandal. For instance, he said he conveyed a “harsh” message to an aide to Ukrainian President-elect Volodymyr Zelensky during a meeting, threatening payback if no investigation into former Vice President Joe Biden and his son Hunter materialized. When he got no response, Parnas said, Trump canceled Vice President Mike Pence’s trip to Zelensky’s inauguration.

He also said that various Trump administration officials, from Pence to Attorney General William Barr, were in on the plot — though these assertions especially haven’t been corroborated.

About the only person who was out of the loop, according to Parnas, was Robert F. Hyde, the Republican congressional candidate who was thrust into the news Tuesday, when texts he’d sent to Parnas that suggested he was having Ambassador Marie Yovanovitch surveilled were made public. Parnas said, though, that Hyde was a “weird” character who was probably making everything up.

Parnas was indicted for campaign finance violations in October, and his legal jeopardy appears to have motivated this break with Trump’s team. Parnas got permission from the judge in his case to turn over documents prosecutors obtained to House impeachment investigators, and now he’s gone public. His motivations for doing all this are a bit murky, but he seems to be angling for either a cooperation agreement with prosecutors or a grant of congressional immunity (neither of which is particularly likely).

So since Parnas has a history of being a slippery character, it’s probably best to treat his claims as unverified until they are corroborated, for instance with his documents. But here’s a rundown of what he’s saying now and what it means for the larger narrative of the Trump-Ukraine scandal. None of it is great for Trump’s claims that Giuliani was acting on his own — again, if Parnas is on the level.

Parnas’s larger message was that Trump knew everything

The biggest point Parnas kept making in his interview with Maddow was a broad one — that Trump “knew exactly what was going on.” Asked what was “the main inaccuracy or main lie” Trump’s team is telling about the scandal, here was Parnas’s response:

Maddow followed up by citing Trump’s statement that he didn’t know Parnas or Parnas’s colleague Igor Fruman. “He lied,” Parnas said. He elaborated:

So Parnas clearly isn’t saying he had a close relationship with Trump. But, he says, they saw each other at many events, including in small group settings (Parnas and Fruman donated hundreds of thousands of dollars to Republican candidates in 2018). Also, Parnas said, he was always around Rudy Giuliani, including when Giuliani was speaking to Trump.

Indeed, it certainly seems plausible based on how Trump operates that the president was being regularly updated on, if not outright directing, Giuliani’s actions in Ukraine. So it makes sense that Trump would know that Giuliani had two associates who would open doors for him and arrange meetings in Ukraine: Parnas and Fruman.

Still, with Trump’s communications with Giuliani occurring either over the phone or in person, and therefore not leaving a record, it is tougher to prove what exactly he knew or was directing.

There were, however, some aspects of the saga about which Parnas got more specific.

1) Pence’s canceled trip to Kyiv: We’ve known for some time that, on May 12, Parnas and his colleague Igor Fruman visited Kyiv and had a meeting with an adviser to Zelensky, Serhiy Shefir.

Then the following day, on May 13, the White House contacted Pence’s office to say that President Trump had decided Pence would not be attending Zelensky’s inauguration. That’s according to the testimony of Pence aide Jennifer Williams (though Pence’s chief of staff has claimed the trip was canceled because the inauguration’s date wasn’t yet final).

Parnas offered new information that — if true — would flesh out what happened.

After Giuliani met with Trump, Parnas said, Giuliani instructed him to give Shefir a message “in a very harsh way.” The message was that if Zelensky didn’t comply with investigating the Bidens, then “all aid” to Ukraine would stop, the US-Ukraine relationship would “sour,” and “nobody would show up to Zelensky’s inauguration.” 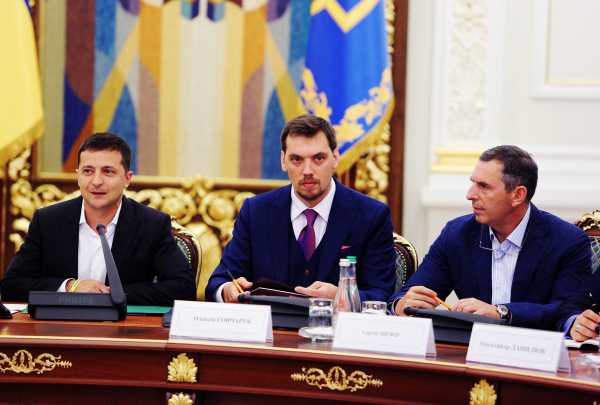 So, Parnas says, he met with Shefir and delivered that message. But Shefir went silent afterward, and stopped responding to Parnas’s messages. So, Parnas says, he called Giuliani back “and said ‘No go’, and I remember Rudy going, ‘Okay, they’ll see.’”

So this is an alleged explanation for why Pence’s trip got canceled. Zelensky’s aide didn’t agree to the quid pro quo, Parnas told Giuliani, and Giuliani told Trump — so that was the end for Pence’s trip to the inauguration. (A less impressive delegation of US officials led by Secretary of Energy Rick Perry ended up attending.)

2) Trump’s canceled trip to Poland: The background is that, in late August — after news had broken that Trump was blocking hundreds of millions of dollars in military aid to Ukraine — Trump canceled a planned trip to Poland, where he was supposed to meet President Zelensky. Trump claimed he canceled the trip to monitor Hurricane Dorian.

Vice President Pence and other officials went instead, and Pence met Zelensky. Ambassador Gordon Sondland has testified that during this trip, he told a Zelensky adviser that the aid depended on an announcement of investigations (though he claims he simply assumed this was the case, and that no one higher up in Trump’s administration had told him so).

Now Parnas is claiming that Trump used the hurricane as an “excuse” to cancel the trip, and that the true reason was that he was “angry” that Zelensky wouldn’t comply. (Asked how he knew this, Parnas said, “I spoke to Rudy.”)

Parnas also claims that Pence was instructed “to discuss this” — to discuss the investigations with Zelensky — “on Trump’s behalf.” He doesn’t really explain how he knows this but says that National Security Adviser John Bolton would know what happened.

As part of Giuliani’s search for Biden dirt — and for a lucrative Ukrainian client — he met with Firtash’s representatives in May and June of last year, the Washington Post reports.

Eventually, two conservative lawyers working with Giuliani and Parnas — Victoria Toensing and Joseph diGenova — landed a contract, in which they were paid about $1 million for four months of work for Firtash. Parnas himself was paid large sums by Firtash associates as part of that arrangement, too. Toensing and diGenova landed a meeting with Attorney General Barr at the Justice Department where they pleaded Firtash’s case, apparently without success.

Parnas now says this was no coincidence. The deal was that Firtash would help provide information on the Bidens and other information Trump could find useful politically, and in exchange, Giuliani’s associates would try to get his charges dropped.

“It was all connected. I mean, it was all — at the end of the day, it was all — the agenda was to make sure that the Ukrainians announced the Biden investigation,” Parnas said.

Indeed, handwritten notes by Parnas contained in the House’s document release seem to confirm this. Written on a notepad for the Ritz-Carlton Vienna (the hotel where Firtash reportedly lives), Parnas’s notes freely intermingle references to getting Biden investigated and Firtash’s legal situation. We still don’t know the full story of what went on, but it looks ugly.

Parnas claimed Mike Pence and William Barr were part of the scheme, but he offered few specifics

Less corroborated were some claims by Parnas about other Trump administration officials: Vice President Pence and Attorney General Barr.

Parnas said Pence was “100 percent” in on the plan to pressure Ukraine, and that “he couldn’t have not known.” And he said Barr “had to have known everything.”

But asked for specifics, he was cagey. For instance, when asked specifically if Pence knew why his trip to the inauguration was being canceled, Parnas answered broadly rather than specifically: “I’m going to use a famous quote by Mr. Sondland, everybody was in the loop.”

And for Barr, Parnas claimed that he “was involved in lots of conversations that Joe diGenova” had with Barr. And that he also said Giuliani had conversations with Barr “in front of me” (apparently over the phone). 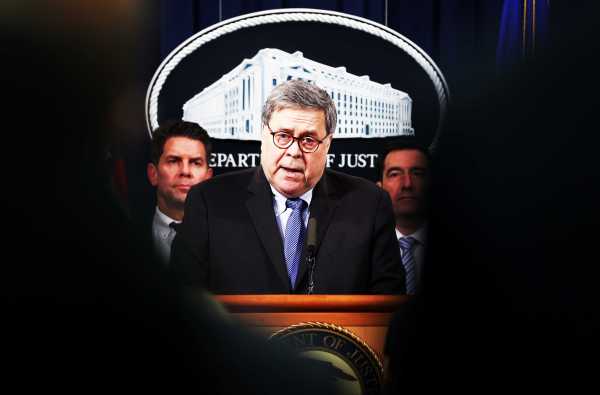 Yet then, asked specifically if Giuliani told Barr about the scheme to get Biden investigated, Parnas similarly retreats to a general claim: that Barr “had to have known everything.”

He added that Barr was “best friends” with Giuliani, diGenova, Toensing, and declared: “Barr was basically on the team.”

There remain questions about Barr’s role in this whole affair. Notably, Trump repeatedly told Zelensky on the phone in their infamous July 25 call that he should get in touch with Barr (in addition to Giuliani) regarding investigating the Bidens. But for now Parnas’s claims about him are broad and uncorroborated. (A Justice Department spokesperson told Maddow in a statement that Parnas’s claims about Barr were “100 percent false.”)

Finally, one of the most disturbing parts of the recent Parnas document dump is a set of claims by Robert F. Hyde, a Trump donor and Republican congressional candidate, suggesting he had people in Ukraine surveilling Yovanovitch. “If you want her out they need to make contact with security forces,” Hyde even offered.

This certainly sounds bad, but it’s far from clear that Hyde actually had the capabilities to do this. He owned a landscaping company in Connecticut and has no known ties to Ukraine. Furthermore, he has a history of bizarre behavior (he was taken into police custody last year after an incident at the Trump National Doral Miami). So this could have been an empty attempt at braggadocio — delusions of grandeur.

And indeed, when Maddow asked Parnas about Hyde, Parnas laughed through his answers, suggesting Hyde should not at all be taken seriously.

Parnas called Hyde “a weird individual” who hung out at the Trump hotel and was always drunk (“I’ve never seen him not drunk”). Parnas added that Hyde seemed “off the wall” and that, as the messages continued, he was warned by a Trump Super PAC official to “stay away from him.”