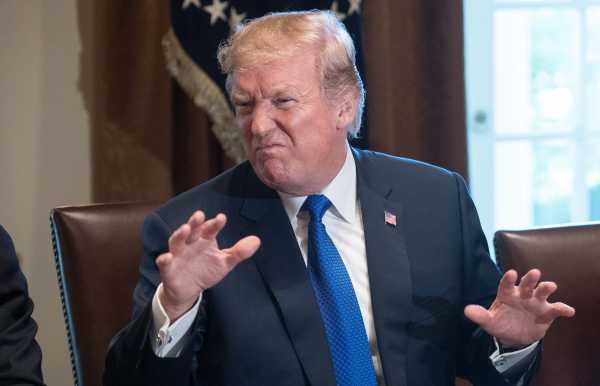 It appears that a rogue Twitter employee who wanted to end their last day at work with a bang is behind the disappearance of President Donald Trump’s Twitter account for 11 attention-grabbing minutes on Thursday evening.

And it looked more serious than some kind of temporary suspension: People were astonished to find dramatic error messages stating that “@realDonaldTrump does not exist” when visiting his page.

For more than 10 minutes — an eternity in internet time — Twitter users floated countless colorful theories to explain why it was deactivated.

Did Trump delete the account himself, upon the recommendation of his lawyers that he was in serious legal jeopardy tied to Russia? Had Trump’s staff finally decided that the Twitter account was too much of a distraction for the president, and made the ultimate intervention? Had Twitter suspended the account, finally caving to criticisms that the president’s violent threats to his adversaries violated the social media site’s terms of service?

But a couple of hours later, Twitter made another announcement that provided a significantly juicier explanation. It wasn’t an error, but a deliberate move by an employee who wanted to take a jab at the president as they walked out the door on their final day of work.

“Through our investigation we have learned that this was done by a Twitter customer support employee who did this on the employee’s last day. We are conducting a full internal review,” Twitter said in a statement.

Trump’s critics responded to the news with an outpouring of support and celebration for the employee’s edgy gesture.

While this time around the deactivation of Trump’s account seems to have been harmless, the act does raise a number of serious questions about the kinds of safeguards Twitter has regarding its most high-profile accounts.

How senior was the employee who committed the act — did they have any kind of special access to accounts at the company that allowed them to delete the account? Are there safeguards in place to protect official government accounts? Is it possible for other Twitter employees to quietly delete smaller accounts for political reasons without detection?

For now all we know that the day will go down in history as one of the most inventive ways to quit a job that someone’s come up with.