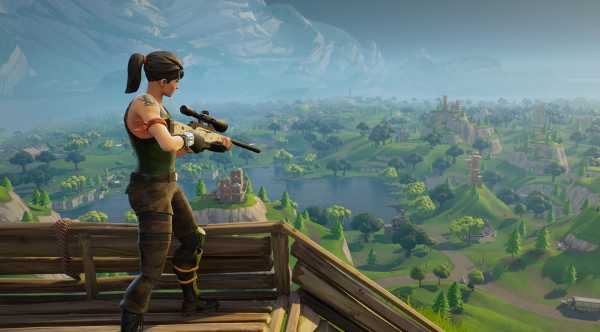 Fortnite is finally coming to Nintendo Switch. The massively popular battle game got a surprise launch today on the equally popular console, immediately after Nintendo announced the news at gaming industry conference E3 earlier in the morning.

The move is a win for gaming fans, who’ve long been awaiting the arrival of Fortnite on the hybrid console. It’s the latest in a string of wins for Nintendo, which staked its future on the Switch and wound up delivering the fastest-selling console of all time. Above all, it’s a win for Fortnite, the record-breaking game whose abrupt upswing in popularity sparked all the interest to begin with, and its developer, Epic Games.

Just how popular is Fortnite? For starters, it’s been raking in the cash, surpassing its predecessor, Player Unknown’s Battlegrounds (about which more in a moment), and earning more than $100 million per month in in-app purchases. Remember, this is a game that’s free to download and play, so that’s pretty epic. In February, it hit a record of 3.4 million people playing the game all at once, while its overall player base has reportedly passed 45 million.

So what’s made Fortnite such a smash, and why is it attracting so many different types of players? To understand that, we have to look at the types of games it’s emulating — and how it’s transcending them to create something new, trendy, and fun.

The word “Fortnite” can imply one of two very different modes of playing.

There’s the original Fortnite, released last summer as an early-access title — in essence, a beta release — by Epic Games, longtime developers behind titles like Gears of War and Infinity Blade. Fortnite is what’s known as a “sandbox” game because it’s a nonlinear story and the emphasis for the player is on roaming around, exploring, and building the world while completing quests in your own good time. In other words, it’s like Minecraft.

But there’s a twist: In a game like Minecraft, you’re pretty much making your own objectives. In Fortnite, your objective is clear: build shelters and collect stuff that will help you survive the zombie apocalypse.

If you’ve ever thought about what weapons and strategies you would use to outwit the zombies, Fortnite allows you to live out your survivalist fantasies. Your goal is to build forts and other structures — from log cabin watchtowers to fully weaponized castles — that can survive fortnightly zombie onslaughts while being outfitted with booby traps and other devices. Fortnite is also a co-op game, which means you can play with a group of friends.

Oh, and unlike Minecraft, when the zombies show up, you can shoot them. A bunch.

When most people talk about playing Fortnite, however, they’re talking about playing the game with a special Battle Royale mode that draws a number of elements from the famous 2000 Japanese film, a pitch-black dystopian satire in which students are forced to compete in a kill-or-be-killed bloodbath.

It also borrows plenty from last year’s hit game Player Unknown’s Battlegrounds, where up to 100 players can battle it out to be the last one standing. In other words, gamers play out the plot of Battle Royale, The Hunger Games, Sword Art Online, or any number of last-man-standing battle scenarios.

Witnessing the popularity of Battlegrounds, Epic Games quickly added a battle royale mode to Fortnite — but since the original Fortnite was only released in a limited format to begin with, they also released Fortnite: Battle Royale as its own new game, available to anyone and separate from the original. (For its part, Battleground’s developer is playing nice and welcoming its main competitor into the field.) The full release of the original Fortnite hasn’t even hit stores yet; meanwhile, its child, Fortnite: Battle Royale, has taken over gaming.

In Fortnite: Battle Royale, you’re not competing to survive zombies, but to outlast other people. And for many players, that’s where things get interesting.

Fortnite: Battle Royale’s accessibility is central to its success

There are two reasons Fortnite has been so popular, and they boil down to accessibility: The game has been made available for more people to play, in more ways.

Fortnite: Battle Royale was released as a free download for a variety of platforms in September 2017 and received a popularity boost in January when it added several areas to its world, including a city. Finally, in March, it was released for iOS, and its popularity ballooned. Despite only being released for iOS — an Android deploy is still months away, sorry, Android fans — the game’s mobile app immediately became the top-selling app in 13 countries and reportedly raked in $1.5 million during its first week alone.

The game’s upfront accessibility and ready deployment on multiple gaming consoles, from laptops to PlayStation to Xbox One, has played a major part in its popularity. But another huge boost to the game’s popularity has been cross-platform play — meaning you can play with your friends who are accessing it on a variety of devices and platforms.

Of course, it’s not a perfect system; for example, cross-play between your PlayStation and your friend’s Xbox is currently impossible — though Fortnite’s CEO Tim Sweeney says it’s not only imminent, but “inevitable,” getting at the importance of this aspect of gaming to the industry as a whole. Cross-platform gameplay to any degree is a huge win for gamers and appears to have played a huge role in boosting Fortnite’s popularity.

Fortnite: Battle Royale is that rare novelty: a shooter game for people who may not like shooter games

But perhaps the biggest factor in Fortnite’s success is what fans get when they enter the world of the game. Remember, it’s not just a shooter game and not just a giant world-building sandbox — it’s a combination of both.

So in Fortnite’s version of the battle royale, players also get to scale walls and knock down structures and play some sort of real-time combination of Jenga and parkour as they try to survive and outwit other players. And once you die, you can continue to watch the game play out through the camera of the person who killed you — which makes for a surprisingly enjoyable experience for the newly departed.

All of this allows players to adopt multiple modes of playing — including choosing to hide and watch, choosing to make up your own “the floor is lava!” challenge, and choosing to approach it like your own personal Most Dangerous Game. In essence, Fortnite: Battle Royale may be the first shooter game for players who don’t like shooter games, along with those who do.

That makes Fortnite poised to attract whole new audiences, even before the full release of Fortnite Save The World — that’s the original zombie mode, unlocked and out of beta — arrives at some nebulous point later this year. In the meantime, because Fortnite: Battle Royale is available pretty much everywhere as a free download, it’s easy to hop into. If you want to play with friends, then you all need to download the app on your own devices — make sure they’re all compatible first — and then register for an account with Epic Games.

From there, whether you decide to fight, hide, build, or frolic is all up to you.